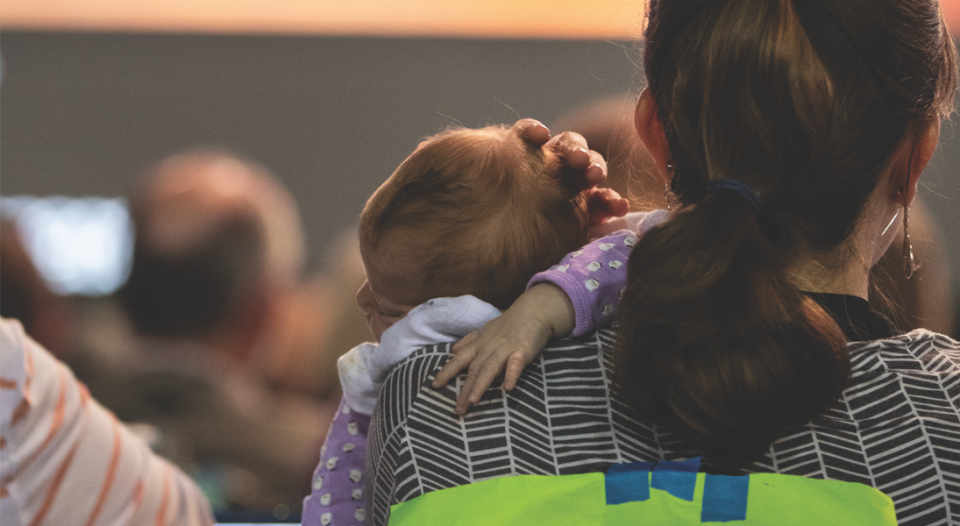 Kristin Klade, a chaplain at Cook Children’s Medical Center, Fort Worth, Texas, voted at the 2019 ELCA Churchwide Assembly with her infant daughter in tow. In her book, Lee Ann M. Pomrenke, an ELCA pastor, discusses the gifts that mothers such as Klade bring to the ministry and the unique challenges they face.

Less than a week after giving birth, I joined an online theology class as part of my senior year of seminary. Most participants were near the campus, in St. Paul, Minn., but I was thousands of miles away in the San Francisco Bay Area, taking breaks from discussions of Greek philosophy and the apostle Paul to feed my hungry newborn.

This seemed somewhat normal to me, though my male professor and fellow participants probably couldn’t relate to needing to physically nourish a baby while using their minds to discuss theology.

This duality of presence experienced by all mothers—whether we breastfeed or bottle-feed, whether we give birth physically, adopt or become stepparents—is a gift of ministry brought by many women leaders in the church.

This giftedness is growing in the ELCA. As of 2018, the ELCA reports that nearly 32% of clergy on the roster were women, many of them mothers.

In Embodied: Clergy Women and the Solidarity of a Mothering God (Church Publishing, 2020), Lee Ann M. Pomrenke discusses the gifts brought to ministry by church leaders who are also mothers and the unique challenges they face. Rooted in biblical texts and stories, the book reminds readers of the many ways in which God is depicted as mothering throughout the Bible.

“We have fallen into a rut in referring to God mostly as ‘Father’ in the church. … Mothering pastors bring perseverance, emotional intelligence and a level of adaptability the entire church needs to emulate.”

Pomrenke, an ELCA pastor, also recounts her experiences with biological and adoptive motherhood, writing about infertility, miscarriage and the costs of child care.

“When I began recognizing the mothering behaviors of God in my own experience, it made me feel less alone,” she said. “I wanted to share that solidarity with others, both caregivers and church leaders. We have fallen into a rut in referring to God mostly as ‘Father’ in the church. … Mothering pastors bring perseverance, emotional intelligence and a level of adaptability the entire church needs to emulate right now.”

Even as Pomrenke emphasizes how clergy moms bring to life the nurturing and mothering side of God, she writes honestly about conflict. In one chapter, she highlights the propensity to understand congregations as families, which can put leaders who are moms into a double bind. Just as children often expect their mothers to be there for them no matter what, congregations often expect that same availability from their mom leaders. In my experience, people sometimes expect more emotional availability and nurturing from female pastors than from their male counterparts.

In many households, mothers also take the lead role in parenting and other duties at home, such as cooking, laundry and cleaning, managing the family schedule and buying needed items for children. During the COVID-19 pandemic, as some schools and child care centers remain closed, families are being stretched as parents tend to kids as well as work. Clergy moms experience these pressures intensely.

Pomrenke expressed hope that, for many Americans, the pandemic has illuminated the tension of working motherhood, including for church leaders. She also emphasized the importance of clergy moms coming together for support.

In January 2017, Jealaine Marple, pastor of Elvira Zion Lutheran Church, Clinton, Iowa, founded a Facebook group called Lutheran Leader Moms to foster collegiality and support among ELCA rostered ministers. She said it’s one of her favorite places online and even spawned a similar group for dads.

“Many of us in the group are not only the first women in our calls but we are the first working mothers. That comes with its own challenges.”

“It’s important for moms everywhere to support one another—not just in the church,” Marple said. “Society is really great at making moms believe that there are some kinds of impossible standards that we’re not reaching. … As a result, we start to hold ourselves to impossible standards. … Many of us in the group are not only the first women in our calls but we are the first working mothers. That comes with its own challenges.”

With nearly 800 members, Lutheran Leader Moms has served as a space for camaraderie, creativity and advocacy. It has also evolved as members, looking within themselves, examine how issues of race impact ELCA pastors who are moms.

Priscilla Austin is a Black Puerto Rican pastor at Immanuel Lutheran Church, Seattle, who has been in the group for over three years. She posts in the majority-white group to help them understand the additional hurdles confronting Black people, Indigenous people and people of color who are also moms and pastors.

In the wake of the George Floyd killing, which heightened Christians’ consciousness and lamentation of racism in America and its churches, Austin catalyzed discussion around making the Facebook group more sensitive to moms of color. Her efforts led to the use of content warnings (affixed to posts that may traumatize readers) when discussing racist comments or actions.

“While there is an awkwardness to how folks are figuring things out, I am appreciative of the efforts, the openness to correction, the humility in debate and the sincerity of concern that is arising,” Austin said. “This, I believe, is a model for how the church could be caring for … leaders and members [who are Black people, Indigenous people and people of color].”

It’s not surprising that a group made up of church leaders who are also moms has found a way to confront the nuances of racism. After all, this is just another of the ideas Pomrenke raises in her book, suggesting that the openness, humility, listening and sincerity honed by motherhood should be prized by the church and recognized in a God who is indeed mothering.

My take: Life that is really life

The texture of the blessing