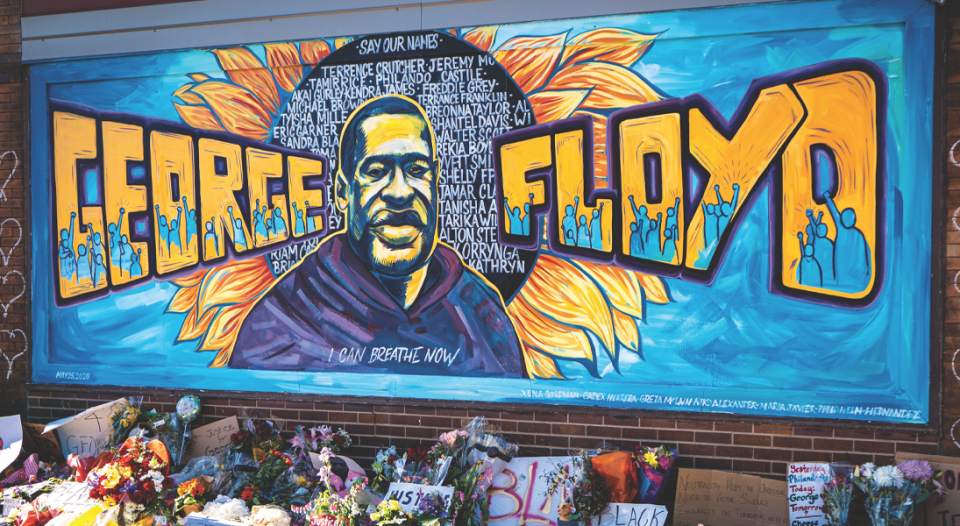 A mural and memorial were created for George Floyd in Minneapolis following his killing by a police officer there on May 31.

In the wake of this summer’s racial justice events—the protests that followed the killing of George Floyd, the fifth anniversary of the Emanuel Nine shooting, the increasingly widespread recognition of the Juneteenth holiday—ELCA institutions, organizations, congregations and synods have responded in a variety of ways.

St. Olaf College, Northfield, Minn., established the George Floyd Fellowship for Social Change, committing $100,000 to the program. Coordinated by the Taylor Center for Equity and Inclusion, the fellowship will support the advancement of African descent students. The program will provide recipients with leadership development opportunities, mentoring and stipends supporting internships, research projects and other opportunities.

“The confluence of a global pandemic, the public murder of George Floyd, new people awakening to the reality of racism in our country and Rev. Dr. Denson-Byers’ prophetic Pentecost sermon led the EDLARJ to begin online training designed to help us carry out our mission to ‘Awaken hearts, confront injustice and inspire transformation,’” Seifert said. The EDLARJ hopes to offer the training monthly to synods.

“As we labored together, we found ourselves liberated from the burdens of worship in the midst of a pandemic, and freed to worship as one church.”

In addition to the ELCA Prayer Service for Commemoration of the Emanuel Nine on June 17, some congregations held local commemorations and prayer vigils in honor of the nine people of African descent killed by a white supremacist at Emanuel African Methodist Episcopal (AME) Church in Charleston, S.C.

One such congregation was Lutheran Church of the Resurrection in Cincinnati, which held a gathering in partnership with its “sister church,” Allen Temple AME Church, and Anderson Churches for Racial Unity (ACRU), of which Resurrection is a member.

Formed shortly after the shooting, ACRU is an association of churches working for racial justice in Greater Anderson Township, Ohio, that has held dozens of events and fostered local partnerships over the last five years. “My prayer is that this is not a moment, but a movement to substantially eradicate the sins of racism and inequality in our nation and our community,” said Henry Zorn, a pastor of Resurrection.

That weekend, the Northwest Washington Synod hosted an online worship service for Juneteenth, the June 19 holiday commemorating the end of slavery in the U.S. Rostered ministers and members from across the synod led recorded hymns, readings and other liturgical elements. Priscilla Paris-Austin, pastor of Immanuel Lutheran Church, Seattle, offered a meditation on the word.

“For me, the gift of this work together and our collaboration to celebrate Juneteenth serve as a reminder of the joy and liberation God intends for us all,” Paris-Austin said of the service. “As we labored together as a team, we found ourselves liberated from the burdens of worship in the midst of a pandemic, and freed to worship as one church, together.”

My take: Incomplete and at home

Fire in my bones