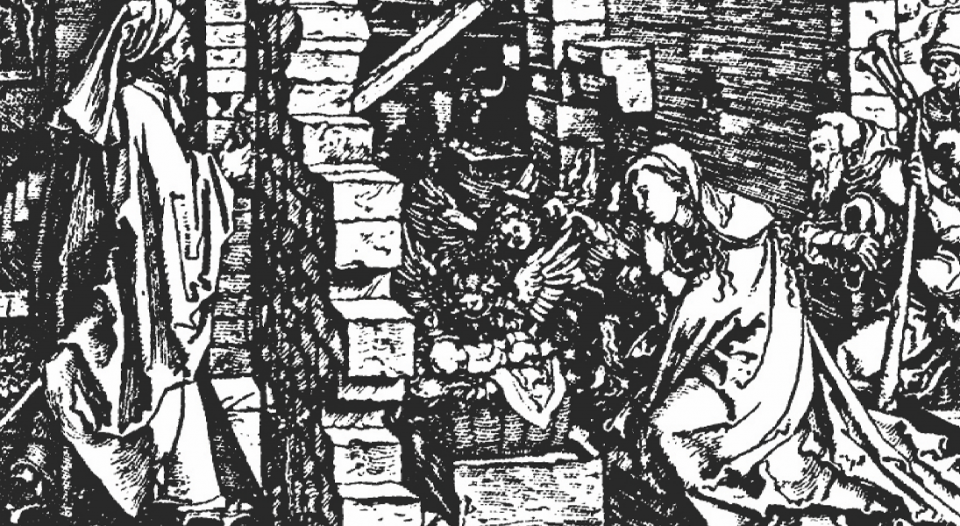 The Shepherds by Albrecht Durer (1471-1528). The stable is a thatched ruin of Romanesque architecture to suggest the remote. The ox and ass feed in the rear of the stable. Shepherds arrive with bagpipes. Cherubim at the manger contracted Luther's view.

If we had lived in Bethlehem when Jesus was born, would we have believed that this newborn was actually God?

This is the question Martin Luther asked in much of his writing on Christmas and Advent. Typically direct for Luther, the query reflects the concerns of humanity and doubt that permeated his work.

“The human rather than the miraculous aspects of the story interested him,” wrote Reformation scholar Roland H. Bainton in his introduction to Martin Luther’s Christmas Book. “[Luther] was able to compose the incredulous reflections of Mary, Joseph, the shepherds, and the Wise Men because these were precisely the doubts with which he was wrestling. The Virgin birth appeared to him a trivial miracle compared with the Virgin’s faith.”

First published in 1948 by Muhlenberg Press, Martin Luther’s Christmas Book collects 30 excerpts from Luther’s sermons on the nativity, translated and edited by Bainton. A 2017 gift edition from Augsburg Fortress includes illustrations by Luther’s contemporaries and two Christmas carols written by Luther—including “From Heaven Above” (Evangelical Lutheran Worship, 268), which he intended to be not only sung but acted out.

In these reflections, Luther consistently focuses on the human realism of the nativity story. “One of the things I appreciate is that Luther doesn’t spiritualize the birth of Jesus,” said Kathryn Kleinhans, dean of Trinity Lutheran Seminary at Capital University, Columbus, Ohio. “He recognizes that the birth of a baby—even the Christ child—involves pain and blood and that the care of an infant—even the Christ child—can be dirty, smelly business.”

“[Luther] was able to compose the incredulous reflections of Mary, Joseph, the shepherds, and the Wise Men because these were precisely the doubts with which he was wrestling.”

As a husband and father, Kleinhans said, Luther is able to show a deep appreciation for the reality of Mary’s experience giving birth with no midwife or water. “She was flesh and blood, and must have felt miserable—and Joseph too—that she was left in this way, all alone, with no one to help, in a strange land in the middle of winter,” wrote Luther in the sermon “Nativity.”

Kleinhans added, “He preaches about the fear and the loneliness she must have felt while giving birth.  The deep joy of giving birth to the Son of God, the savior of the world, does not take away the pain and blood and work of labor, especially in less-than-ideal circumstances.”

Indeed, Luther argued, the difficult realities of the human experience are where God meets us through the Christ child. “The crux of Luther’s messages on Advent and Christmas is this: God comes down for us,” said Mary Jane Haemig, professor emeritus of church history at Luther Seminary, St. Paul, Minn.

“Consider each part of that statement. ‘God’: it is God in the flesh who is in the manger. The lowliness of God offends human reason but should not offend us. ‘Comes down’: God does not demand that we ascend to heaven; rather, God comes to us, into our lives, our situations, our sufferings. ‘For us’—God in Christ comes to do something for us. Christ is not simply an example; rather, he actively changes our lives.”

In this way, Luther emphasized that we should feel comforted rather than alarmed by the notion of God joining us in our struggles.

“I would not have you contemplate the deity of Christ, the majesty of Christ, but rather his flesh,” Luther wrote in “Nativity.”

“I would not have you contemplate the deity of Christ, the majesty of Christ, but rather his flesh,” Luther wrote in “Nativity.” “Look upon the Baby Jesus. Divinity may terrify man. Inexpressible majesty will crush him. That is why Christ took on our humanity, save for sin, that he should not terrify us but rather that with love and favor he should console and confirm.”

In these works, Luther cautioned his audience—and us today—not to think of ourselves as having transcended our humanity. “‘If only I had been there! How quick I would have been to help the Baby! I would have washed his linen,’” he wrote in “Nativity.”

“You say that because you know how great Christ is, but if you had been there at that time you would have done no better than the people of Bethlehem. Why don’t you do it now? You have Christ in your neighbor.”

In the nativity, Luther identified a mission of living out the Christmas story all year by finding ways to care for those in need in our communities. God enters into these ordinary places and, in turn, sends us back into them, Haemig said, emphasizing Luther’s doctrine of vocation.

“Luther’s sermons are not primarily about motivating us to do something,” she added. “They are about announcing God’s work, a work that frees us and carries us back into our ordinary vocations, to serve God and our neighbor in very ordinary ways.”

Praises sing to God the king