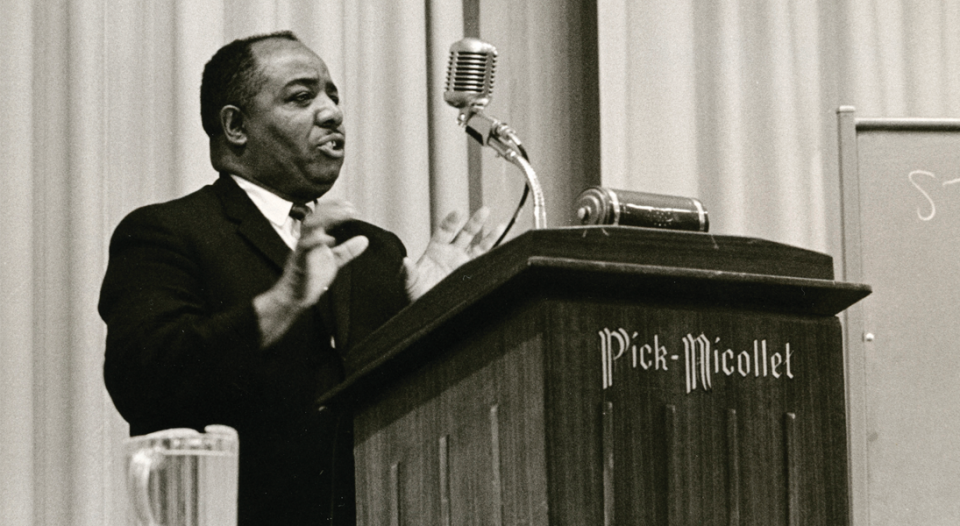 In 2012, Ken Wheeler wrote a reflection concerning Black Lutheran saints on “whose shoulders I stand.” He identified three pioneers of this church—Nelson Trout, Will Herzfeld and Rudolph Featherstone—who greatly inspired him and his vocation. Here is a closer look at the contributions of these saints.

Trout was born in Columbus, Ohio, in 1921. He was a graduate of Capital University and Trinity Lutheran Seminary, both in Columbus. He was also awarded a doctor of divinity degree from Wartburg College in Waverly, Iowa.

Following all of Trout’s education, he served as a pastor for several congregations in Wisconsin, Alabama and California. Trout was a very inspiring and powerful preacher, and while he was serving in Montgomery, Ala. he became friends with Martin Luther King Jr., whom he used to joke with about being a Lutheran.

Following his years serving congregations, he became the associate youth director for the American Lutheran Church in 1960 and served until 1967 when he became the director for urban evangelism. He has also held other roles, such as the executive director of Lutheran Social Services in Ohio, and he was a professor and director for minority ministry studies at Trinity Lutheran Seminary. Trout played a large part in creating an identity for African Americans and other minorities through all of his roles in the church.

Trout is a very important figure in ELCA history as he was the first African American bishop of the church. He was passionate, intelligent and powerful in his preaching and teaching. In 1991, Trinity Seminary established the Nelson W. Trout Lectureship in Preaching in honor of him.

In 1961, Herzfeld was ordained by The Lutheran Church — Missouri Synod and became the pastor of Christ Lutheran Church in Tuscaloosa, Ala., where he served until 1965. While at Christ Lutheran he was involved in organizing a chapter of the Southern Christian Leadership Conference and served as the first president. Through this endeavor he became a close associate of Martin Luther King Jr.

From 1965 to 1970 Herzfeld was an urban minister for The Lutheran Church — Missouri Synod in California. He played a large role in developing relationships and then went on to become an urban planning consultant for Lutheran Council in the U.S.A.

He had an important role in the formation of the ELCA as he was on the Commission for a New Lutheran Church in 1987. After his position at Bethlehem Lutheran Church, Herzfeld became the associate executive director of ELCA Global Mission.

While Herzfeld held this position, he created new relationships internationally. These relationships and partnerships included 70 church bodies and 25 other institutions. He was also responsible for placing approximately 300 ELCA missionaries and volunteers throughout the world.

On May 9, 2002, the Rev. Will Herzfeld passed away at a Chicago hospital at the age of 64. He had been hospitalized after contracting cerebral malaria following a trip to Cameroon and the Central African Republic.

Although Herzfeld is gone, his presence lives on through the work of ELCA Global Mission and the work being done by missionaries and congregations throughout the ELCA.

Rudolph Featherstone, also an ordained pastor, describes himself as “a janitor for Jesus,” and has followed his life-calling, leading the African American Lutheran community.

Following his graduation from Lutheran Theological Seminary at Gettysburg he served as a pastor for 10 years for St. John’s Lutheran Church in the Bronx, N.Y., Incarnation Lutheran in Jamaica, N.Y., and Good Shepherd Lutheran in Detroit. Through his work as a pastor he strengthened the relationship African Americans had with the Lutheran church and local congregations.

Featherstone was a powerful preacher as well as teacher throughout his career. After graduating from Harvard Divinity School, he served in campus ministry at the Massachusetts Institute of Technology as a mentor to students of color.

His presence on campus led him to a position as professor at Trinity Lutheran Seminary. There he taught cross-cultural theological studies and mission. Throughout his entire career Featherstone was dedicated to advocating for African American Lutherans.

Featherstone was also involved in the Conference of International Black Lutherans and has spoken at commencements, presentations and convocations including a Founder’s Day Convocation at California Lutheran University in Thousand Oaks, Calif. His publications and presentations include, “The Legacy of Martin Luther King Jr.,” “A Tri-dimensional Reality and Symbol,” and “Human Dignity in the Thought of Martin Luther King Jr.”

Featherstone is now retired from the ministry and teaching. In 2008 he was given an honorary doctor of theology degree from Gettysburg College.