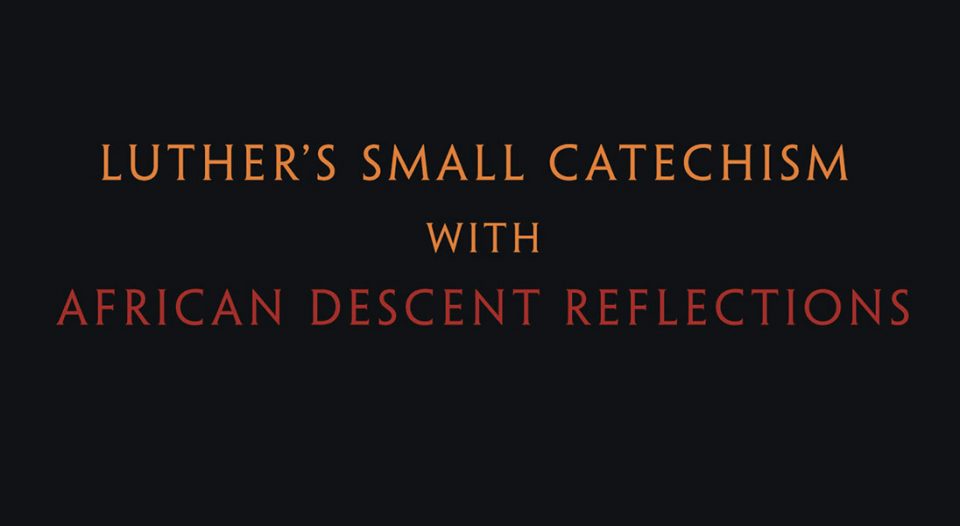 Editor’s note: This story originally appeared in the August 2019 issue.

In 2014, during the lead-up to the commemoration of the Reformation’s 500th anniversary, a group of African descent Lutheran theologians gathered to explore and reflect on Martin Luther’s Small Catechism. While affirming the catechism’s gift in the life of the church, they recognized the importance of broadening its explanations of Christian faith to address the experience of Lutherans of African descent.

This spring, the result of the group’s efforts, Luther’s Small Catechism with African Descent Reflections, was released by Augsburg Fortress.

The edition follows Luther’s format and style, with commentaries offering additional context and illumination from Lutherans of African descent.

Initially, some might believe the book’s audience is limited to those who see themselves in the title. “When we set out, we asked, ‘For whom are we preparing this?’ ” said Joseph M. Bocko, ELCA program director for African national ministries and project coordinator for the book. “We came to realize the audience is the whole church.”

Individuals of African descent will identify with the book’s themes and elements, Bocko said. But it also can serve as a reference for anyone seeking a deeper understanding of what shapes Lutheran beliefs, practices and rituals.

“To do our homework, we looked at the primary purpose Martin Luther had when he wrote the Small Catechism,” Bocko said. “Luther took a tour, visiting cities and rural areas. He saw the rift between the clergy and the laity.”

To bridge those gaps, Luther fused culture and heritage with doctrine and faith, said Beverly Wallace, a contributor to the book.

“Luther’s original Small Catechism is supposed to be universal, but it draws on the events of the time,” Wallace explained. “There is no such thing as ‘unbiased.’ The writer always brings cultural perspective. A typical catechism comes from a particular perspective; it’s always culturally infused.”

As a professor teaching congregational and community care at Luther Seminary, St. Paul, Minn., Wallace seeks to build connections between students of African descent and the larger church. A dearth of culturally relevant resources damages or “miseducates” students, she said.

“When you don’t know how your perspective fits into the narrative … you don’t see yourself in the story,” Wallace added. “And for the larger church, when you know only your own perspective, you miss out. You need a variety of perspectives to truly build your knowledge base.”

“When you don’t know how your perspective fits into the narrative, you don’t see yourself in the story.”

When the group behind the book first met, the late James Echols, former president of the Lutheran School of Theology at Chicago, was serving as ELCA director of theological education and networks. Earlier that year, he had asked Bocko: “How will people of African descent participate in the 500th anniversary of the Reformation?” It was then that plans for creating a new edition of the Small Catechism began.

“During the anniversary, theologians said, ‘the Reformation continues.’ It wasn’t a one-time event,” Bocko said. “The church is to be reinvented, over and over again.”

One way this can occur is through sharing the stories of its many cultures and ethnicities, he said. Bocko and Echols assembled a planning team. In identifying potential contributors, the team reached out to ELCA theologians, scholars and pastors.

Echols stressed the importance of employing accessibility, simplicity and plain language in the resource. In the book’s introduction, written before his death in December 2018, Echols clarified that its reflections were meant to enrich and expand on Luther’s content.

“This project may serve as an invitation to other readers of the Small Catechism to take up similar reflection and contextualization, representing their own various historical, contemporary, cultural and linguistic backgrounds,” Echols wrote.

Such initiative attests to the leadership of Lutherans of African descent, Bocko said, adding, “This book is one of many ways we show that we don’t come to the table with an empty basket. We have gifts to contribute.”