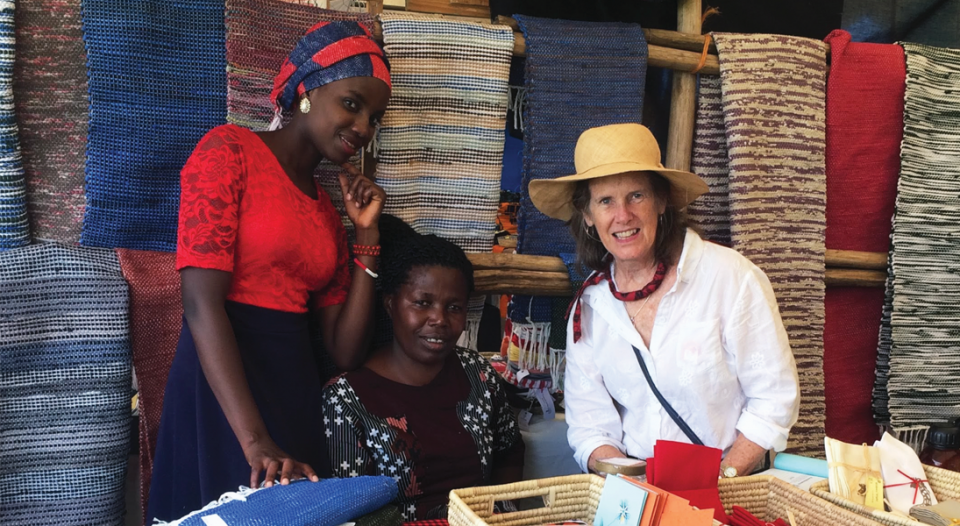 Photos: Courtesy of Linda Jacobson Linda Jacobson (right) and two members of the Widow’s Might group sell wares at a local market. This handmade goods collective provides women with opportunities to build income.

Many years ago, Linda Jacobson changed a tire on a rural road near Arusha, Tanzania. She wasn’t strong enough to turn the lug nuts, but she figured out what to do. “I jumped on the tire wrench to turn it,” she remembered. “The car was full of women, and my daughters recall that, as we drove away, I yelled out the window to the group of men watching, ‘Wanawake wanaweza!’ Women are able!”

Figuring things out has been Linda’s modus operandi since she and her husband, Mark Jacobson, moved to Kenya in 1982, a month after their wedding. In 1985 they accepted a call with the Lutheran Church in America, an ELCA predecessor, to serve as community health workers with the Arusha Diocese of the Evangelical Lutheran Church in Tanzania (ELCT).

There, Mark, a doctor, began supporting Maasai community health workers in six small primary-care clinics. He quickly concluded that people who were acutely ill or injured needed a more robust space for treatment. With the ELCT, he developed one of the clinics into Selian Hospital, which now provides care in orthopedics, fistula, hospice and other areas.

Later he and his team opened the Arusha Lutheran Medical Centre, creating training programs for medical officers and nurses and opening a rehabilitation center for children recovering from surgery.

After working briefly in that clinic and then in hospital labs, Linda found her focus in coordinating volunteers, offering hospitality and arranging housing for visiting medical students and interns. When she became a mother, she settled into her neighborhood, especially through her music ministry at Arusha Community Church.

Her neighbors became her teachers. “I learned that caring for them and being with them is what’s important,” she said.

This and other lessons continue to resonate with Linda as she anticipates retirement. After 38 years of service, during which the couple became the ELCA’s longest-serving active mission personnel, the Jacobsons are spending more time in their home state of Minnesota.

A legacy of love

Looking back, Linda noted a passion for gender justice in her community mission work. One of her first teachers in Tanzania introduced her to the country’s cultural practice of disinheriting widows: if a woman’s husband dies, their property goes to his family rather than to her.

Not every widow’s in-laws claim the property, but Evelyn (last name withheld) and her children were going to lose their house. “I’m not going to fight my family,” Linda remembers her saying. “I’m just going to work. God will help me.”

Together, Evelyn and Linda launched Widow’s Might, whose members support their families by weaving, sewing, embroidering and beading. Widows manage the business, and Linda finds places to sell their wares.

Other women educated Linda about sexual assault in Tanzania. She immersed herself in the subject, talking about safety and health in relation to secondary school students and even opening a clinic where women could get help after being assaulted.

Linda recalls sharing “joys and worries and fears and problems and death and sickness” with women she’s met throughout her career. Celebrating baptisms and weddings, grieving at funerals, and gathering in a multinational women’s Bible study, she’s been awed by her Tanzanian community’s strong social support.

“If your brother dies, the whole village shows up for the funeral and they all contribute,” she said. “You are part of a bigger group all the time. It’s not just your little family. … I like that. I need help, I need to give help. I like the exchange that is constantly going on. I find the North American ‘I can take care of myself’ approach so lonely.”

Linda finds much to love about the country where she has spent most of her life: the way Tanzanians live so transparently among each other, largely outdoors; the way everyone thanks God all day long for the rain, the sun, for all circumstances; and how people support and help one another. She also loves the country’s beauty, color and chaos.

“The gift of chaos” is something she brings to her marriage. “Mark makes plans, but often in Tanzania, plans don’t work,” she said. “I am more spontaneous and flexible and can embrace things as they are. Which is good, because so many things are unpredictable and out of your control. Our approaches work well together.”

When Westerners encounter a problem, she observed, “we want to fight, change, control or fix it—and by ourselves. If things get really bad [here], we pray. My neighbors start by asking God what God wants us to do. I don’t always understand that, but [I] am learning from this tremendous faith that God is there with [me] no matter what.” =

To learn more about the Jacobsons, search for Kuambatana (Accompaniment) at YouTube.com.

An interview with Bethany and Steven Friberg, ELCA missionaries

Different but the same

New life for children with disabilities in Tanzania