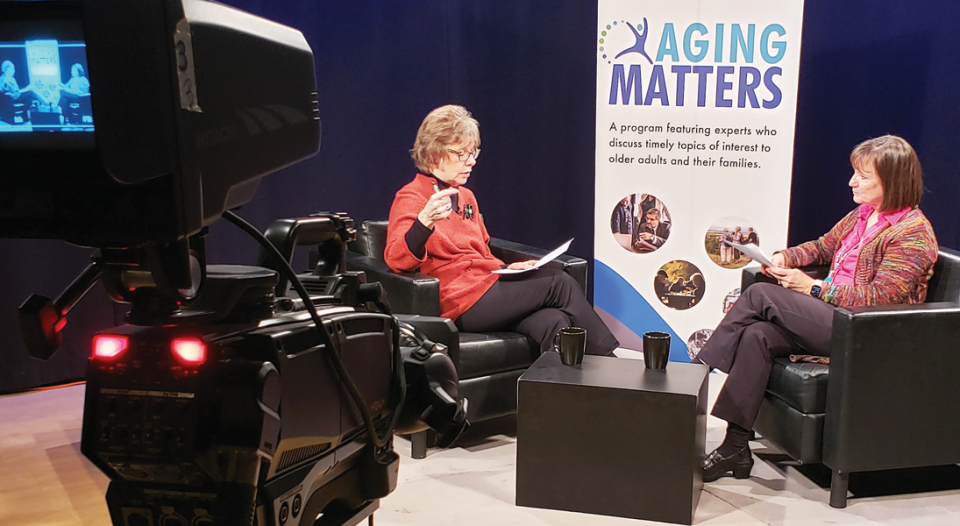 Cheryl Beversdorf had a long and prestigious career. A registered nurse, she served with the U.S. Army in Japan and at the Walter Reed Army Medical Center in Washington, D.C. Later she worked for the U.S. Senate Committee on Veterans’ Affairs and held senior executive positions at several nonprofit organizations, including the National Coalition for Homeless Veterans. She has earned advanced degrees in public health and communications.

But nothing helped Beversdorf articulate her life’s calling like her postretirement volunteer work producing and hosting the radio and TV series Aging Matters.

“I believe that God has put me here for a purpose,” she said. “I’ve led organizations and I’ve done a lot of different things. But this opportunity of being able to … convey messages that are helpful to people—older adults, their families, people who are facing crises—I feel that that’s what God wants me to do. Those are the gifts that have been given to me, and it’s my job to do it however I can.”

Over the years, Beversdorf has produced several cable-access TV programs through the nonprofit Arlington Independent Media (AIM), which has supplied the people of Arlington, Va., with video production equipment, facilities and training since 1982. When AIM launched a community radio station, WERA-LP 96.7 FM, in December 2015, Beversdorf had a new idea.

“I believe that God has put me here for a purpose.”

“I thought what I’d really like to do is combine all of my experience and background and knowledge in nursing and public health, and the fact that I was getting older, and do an interview program that would focus on aging issues,” she said.

Aging Matters launched in January 2017 as a weekly program, available on WERA and as a podcast. Beversdorf realized that certain topics—such as stroke symptoms or CPR—lent themselves better to a visual medium. In September 2018, Aging Matters debuted as a half-hour TV series, broadcast twice weekly on Arlington channels (Comcast channel 69 and Verizon channel 38), streaming live online and available on YouTube.

Up until 2020, guests on both iterations of the program were interviewed in the studio. When COVID-19 hit, AIM engineers began coming to Beversdorf’s home to record the radio show, which now numbers more than 200 episodes. The TV version changed formats, presenting remotely recorded stories of adults who have done significant work in their communities.

Beversdorf grew up in Wisconsin as a member of the Lutheran Church–Missouri Synod. Her faith was important to her, but she wanted to belong to a church where women were ordained, she said. For decades she and her husband, Dennis, have attended Christ Lutheran Church in Washington, D.C.

Ann Marie Nelson, who joined Christ in 1991, described Beversdorf as “very active in the church, educating people on health issues or other issues, [such as] for veterans, for as long as she’s been a member.”

Nelson, an anatomic and clinical pathologist who was a pioneer in the descriptive pathology of HIV and AIDS in Africa, appeared as an expert guest on Aging Matters. “It’s a really good resource, especially for senior people,” she said, “but it’s a resource for people who are taking care of seniors as well.”

Nelson and Beversdorf have each served in various leadership roles at Christ, presenting workshops together and participating in various ministries. “Over 30 years, we’ve done a lot of things together,” Nelson said.

“There’s a definite lack of programming specifically for the older demographic that is produced by that same demographic.”

Beversdorf also strives to serve the public beyond her roles in congregations and ministries. “Cheryl is really tireless,” said Jackie Steven, director of community programs at AIM (where Beversdorf serves on the board of directors). “I can’t say enough about the contributions she’s made to our community, but also to the larger Arlington and D.C. communities.”

Beversdorf’s commitment aligns with AIM’s mission to cultivate community voices that might not be heard otherwise. “There’s a definite lack of programming specifically for the older demographic that is produced by that same demographic,” Steven said. “It serves the community because there’s not really anything like it around here on commercial or on community-based or public media.”

Through the work she continues to do, Beversdorf has come to better understand the need for purpose since retirement. “This has been such a godsend,” she said, “not only because I feel like I am serving an important purpose and providing good information for older adults and their families, but it makes me feel good and it’s intellectually challenging. It’s a win-win situation.”

The joy and work of retirement

Are we really an aging church?

Staying centered as caregivers during the COVID-19 pandemic