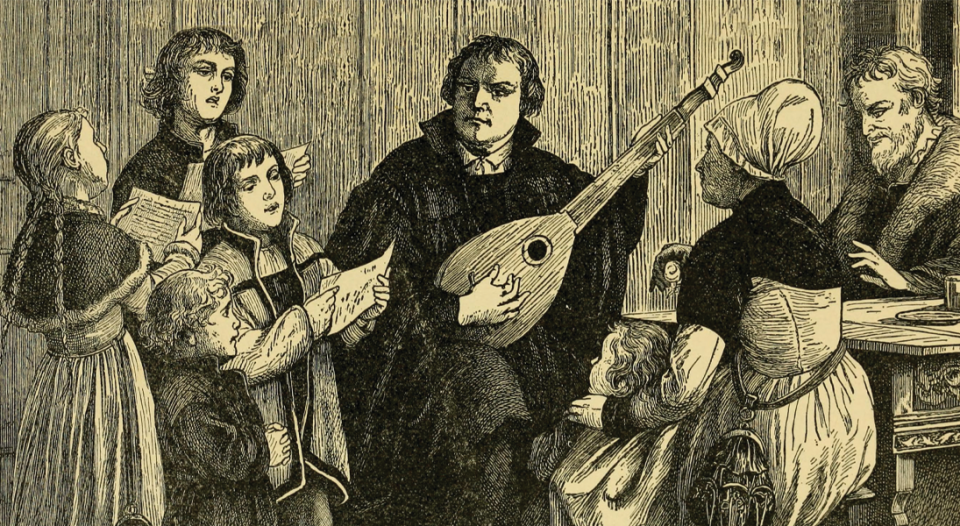 In my home office, directly behind my writing desk, you’ll find a massive Bible that holds much more than Scripture. Inside are the handwritten notes, quips and quick thoughts of my grandmother, my great-grandmother, my great-great-grandmother and various other relatives. Now you’ll find my handwriting, too, because this Bible also serves as a genealogy ledger. Every time there’s a marriage or birth, names and dates are added.

Of note is a scrawled pen mark by Hay, my great-great-grandmother: “Ezekiel, 16 Chapter in the 6 verse, the stop blood, page 587.” According to family lore, this verse was spoken over numerous bleeding humans and animals (my family were farmers, after all) to stanch the blood until the doctor arrived.

My religious devotion rests upon not only Scripture but also the people who penned these notes of faith for their family, a faith found less in sanctuaries than around my grandmother’s Singer sewing machine and my great-grandfather’s Chevy.

Our own blessed Martin Luther deeply understood this familial exchange of faith. His perspective was distinct at the time but has gained new currency as the pandemic has forced many of us into extended homestays. Luther’s ideas on messy grace fit quite well with his notion that theology is a from-the-ground-up exercise for Christians, modeled on the day-to-day work and family life of ordinary people.

Luther saw real benefit in the family learning the catechism together.

Most mornings in the Luther home, you would find the whole family gathered around the dining table for devotions. Martin and Katie and their six children would all study the catechism together, learning from one another. Luther saw this as both a particular responsibility and a particular opportunity for a family. “Most certainly,” he wrote, “father and mother are apostles, bishops, and priests to their children, for it is they who make them acquainted with the gospel” (Luther’s Works, 45:46).

The parent in me knows that this catechism study was no Norman Rockwell painting. Children are noisy. Parents are temperamental. Toddlers are distracting and distractable. The scene wasn’t pristine—no family gathering is.

But Luther saw real benefit in the family learning the catechism together. Though he saw parents as apostles, bishops and priests to their children, he also was quick to identify a child’s faith as the most pure.

In Luther’s humor, we see a childishness that might smack of immaturity but, I believe, demonstrates his effort to embody a childish awe and gratitude in matters of faith. The mystics might call this “beginner’s mind,” a return to the mystery and wonder at the heart of all divine dealings. I seek to embody it too.

This return to a childlike posture in the presence of God shows that Luther learned as much from his children as they did from him. His table talks contain several offhand remarks that his faith was nurtured by the insights of his babies. This was true intergenerational faith formation during a historical period in which children were marginalized and often brutalized by adults.

In Luther’s family, faith and life intersected most touchingly at the deathbed of his beloved daughter Magdalene. The Luthers lost two of their daughters in childhood; Magdalene died in Luther’s arms. In his table talks, he records his final conversation with her, in which he identified her faith as being strong and content and his own as wavering in the moment. Magdalene’s faith was what he learned from and leaned into when the final moment came.

In Luther’s humor, we see a childishness that might smack of immaturity but demonstrates his effort to embody a childish awe and gratitude in matters of faith.

It would be easy and, I think, ill-advised to romanticize the Luther family. All households have dust in the corners, yelling in the halls and moments of ill temper. But the catechism reminds us, as it surely did Luther, that love and forgiveness are part of the faith-formation process. For Lutherans, confession in a confessional is no more holy than apologizing to your child or spouse for your hurtful words. Each forms faith and repairs the relationship.

Unique for its era and still instructive today, the Luthers’ approach grew not only from the Scriptures themselves but also from the intentional interactions of their family, gathered around words of faith.