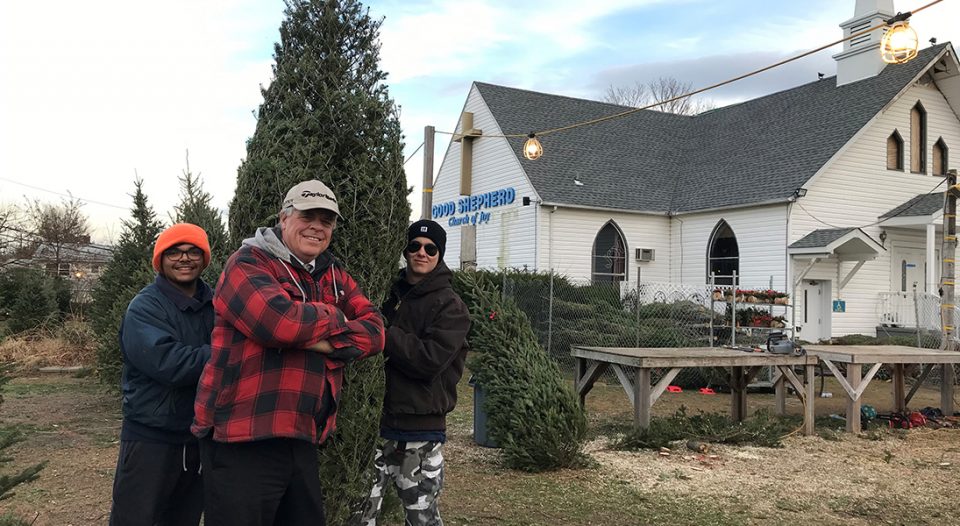 Remo Madsen, pastor of Good Shepherd Lutheran in Levittown, N.Y., sells Christmas trees with some teens from the community to raise money to rebuild the congregation's sanctuary after a 2020 Christmas Day fire destroyed it.

Less than a year after a fire on Christmas morning destroyed Good Shepherd Lutheran in Levittown, N.Y., the congregation was selling Christmas trees to raise money for their rebuilding efforts.

By mid-December, the 400-member Long Island congregation was close to selling out of the 1,000 trees they had purchased from Canada and Maine. Though Good Shepherd has sold trees for years—typically using the proceeds for a church slush fund—this season’s sale was particularly poignant. The $45,000 profit members hope to make will get them one step closer to their goal of a new sanctuary.

With an insurance settlement and $450,000 already raised from the congregation and community, the church is forging ahead in its $2.5 million rebuilding campaign. It currently has a $400,000 shortfall.

“After the fire, we decided immediately to rebuild,” said Remo Madsen, pastor of Good Shepherd for the past 15 years. “We decided to get right back on our feet and take the steps to rebuild on the foundation that survived the fire.”

“We know we wouldn’t be where we are without community support.”

Madsen recalled getting the 11:45 a.m. call from the fire department last Christmas, informing him that the building was ablaze. Fortunately, no services were scheduled for Christmas Day. The fire started when attic fans from the 1950s shorted out after being run to circulate air during the pandemic for health and safety precautions. When the fire was extinguished, the interior of the 70-year-old church building had been severely damaged by flames, smoke and water.

But the congregation, which calls itself the “church of joy,” wasn’t going to be deterred. The following Sunday, members brought chairs and blankets and worshiped outside in the cold. Several weeks later, they erected two tents, complete with heaters, for worship and Sunday school. A member donated a recreational vehicle for Madsen to use as a church office.

“It’s a challenge for the elderly and people with babies and small children to come worship outside in the winter, but we’re making the best of it,” Madsen said. “We even have portable bathrooms.

“What we’ve established here, given that so many churches are failing or closing, makes us realize that we’re called to be a light on Long Island now more than ever. We’re a mainline traditional church, but we’re also modern. Sundays are joy-filled. People leave refreshed and renewed for the week ahead. That kind of thing isn’t found everywhere, and we want to keep it.”

The congregation, which hopes to worship in its new building by the end of 2022, is working with an architect to design a modern and more functional church, Madsen said. The new space will be more accessible, with new bathrooms and wider aisles and hallways. The congregation also plans to add a second story to the education wing, which will match up to the new two-story sanctuary and office building.

“People feel good about building on the foundation,” Madsen said. “We built a foundation of faith, and in that sense, we’re standing on our old ground.”

Raising funds hasn’t been easy, but Madsen praised the support from the community. Two local Catholic parishes donated $10,000 each, and contributions have come from other Lutheran churches as well. The tree lot, run by members and local teens, has bolstered a sense of community between the congregation and the neighborhood.

“The tree lot allows me to work shoulder-to-shoulder with church and community teenagers, allowing for a unique sort of pastoral relationship of trust,” Madsen said. “In that context, authentic witness happens. Also, our adults working the cash register build friendships and support among one another, which simply builds community.”

Overall, Madsen feels grateful this Christmas. “We really appreciate the sense of the community gathering around us,” he said. “We know we wouldn’t be where we are without community support. We’re looking forward to building a new sanctuary, and it can’t come soon enough.”

Put a candle in the window