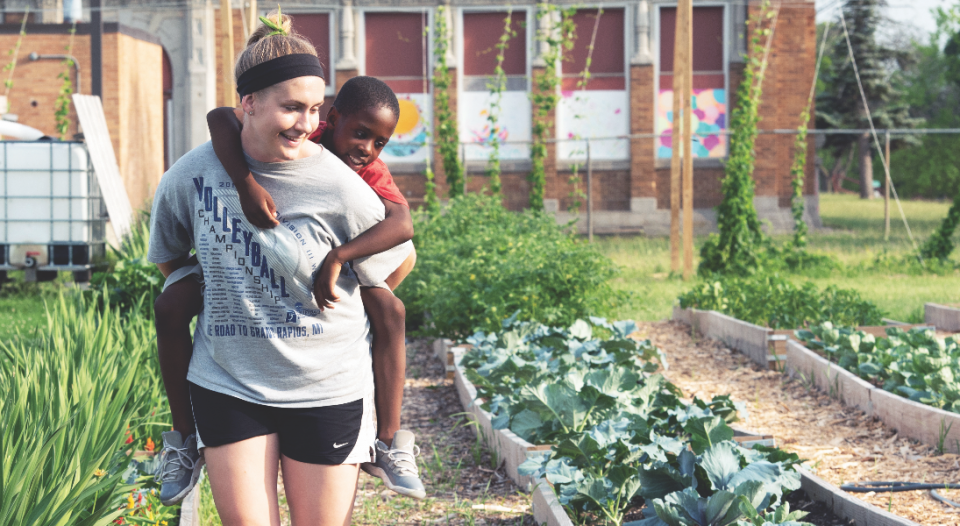 The Micah 6 Community, founded in 2011, works to revitalize Pontiac, Mich., through neighborhood gardening projects and opportunities for enrichment and worship.

Editor’s note: Scott Seeke is pastor of Holy Cross Lutheran Church, Livonia, Mich., where Dennis Walker is a member. The congregation has supported the Micah 6 Community with volunteers and donations since 2019.

Dylan Pyeatt and Coleman Yoakum stood with their real estate agent on the front porch of a duplex at 32 Newberry St. in Pontiac, Mich. It was 2011, and they were looking for more than a home. They also wondered if this was where God was telling them to begin a neighborhood revitalization ministry.

A neighbor approached. “Your realtor isn’t going to tell you this,” he said, “but a woman was hurt here a few weeks ago. Assaulted right here.” The agent’s face fell.

Looking at each other, Pyeatt and Yoakum said, “This is it.” They bought the house for $9,000.

In front of their new home, they posted a sign with Micah 6:8 on it: “Do justice. Love mercy. Walk humbly with God.” In the years to come, “Micah 6” would lead to the formation of a synodically authorized worshiping community called Underground Church, with Pyeatt as mission developer and Yoakum as executive director of Micah 6.

Pyeatt and Yoakum first met in 2005 at Harding University in Searcy, Ark., when both volunteered for a jailhouse ministry. “We got [the inmates] excited about studying the Bible,” said Pyeatt, who majored in biblical studies. “It was great.”

While volunteering, Yoakum and Pyeatt discovered that many inmates came from an area of Searcy near Woodruff Avenue. They decided to check it out. “We had no plan and no money,” Pyeatt recalled. “Just a soccer ball. So we decided to take the soccer ball [there] and see what happened.”

They played soccer first with the kids, then with their parents, getting to know them all. Later they organized volunteer groups to fix broken or damaged property in the area. Relationships grew and “organic things began to happen,” Pyeatt added. Feeling inspired, he and Yoakum put together an Easter festival, including a petting zoo with animals they hid in their dorm.

Yoakum and Pyeatt built and planted a garden in the backyard of the Micah 6 house. They also raised chickens for eggs. Soon they were giving free fresh produce and eggs to neighbors.

Ever so slightly, the neighborhood improved. As graduation approached, Yoakum said, he and Pyeatt thought, “It would be cool to do this in a bigger way.” So after college, in 2011, Yoakum began investigating Detroit as a site for a revitalization ministry. Soon he, Pyeatt and other college friends moved into what is now the Micah 6 home in Pontiac, which, like Detroit, has high crime and poverty rates.

But before launching any programs, Yoakum and Pyeatt asked the residents what they needed and were told: “A place to buy fresh vegetables.” The area was a food desert, miles removed from grocery stores or farmers markets. The only nearby food came from gas stations or liquor stores, and public transportation didn’t connect to a grocery store.

So Yoakum, Pyeatt and their roommates built and planted a garden in the backyard of the Micah 6 house. Out of the earth sprang tomatoes, cucumbers and zucchini. They also raised chickens for eggs. Soon they were giving free fresh produce and eggs to neighbors.

After starting the garden, Pyeatt knew they “wanted to and could do more.” In 2012, the Micah 6 team purchased a small building. Three years later, after raising and spending $100,000 on renovations and permits, they opened Sprout, a store where residents could buy the excess produce at an affordable price. The team also bought eight vacant lots for $80, on which they and their neighbors planted fruit trees.

Since founding Micah 6, Pyeatt and Yoakum have worked other jobs to pay the bills. Yoakum hired on at a nearby business as a receptionist, and Pyeatt applied for a job as youth director at Lutheran Church of the Master in nearby Troy. Raised in the nondenominational Churches of Christ movement, he knew nothing about Lutheranism but wanted to do ministry. Pyeatt got the job in 2015 and, as he worked, was taken by the ELCA’s inclusiveness and theology of grace.

In 2016 the owner of the closed Webster Elementary School, across the street from Micah 6, reached out to Yoakum and Pyeatt. “I’ll give you Webster,” they were told, “if you also take Emerson Elementary.”

Over time Pyeatt connected with six other nearby ELCA congregations and invited them to support Micah 6: Shepherd of the Lakes in Commerce Township, Calvary in Clarkston, King of Kings in Lake Orion, Beautiful Savior in Bloomfield Hills, Good Samaritan in Pontiac, and Holy Cross in Livonia. Their participation includes volunteering, donating, cooking meals and more.

Then in 2016 the owner of the closed Webster Elementary School, across the street from Micah 6, reached out to Yoakum and Pyeatt. “I’ll give you Webster,” they were told, “if you also take Emerson Elementary.” Micah 6, now an official nonprofit, assumed ownership of both buildings without paying a cent.

“The game-changers that both of these projects can be for their neighborhood is enough to get anyone excited,” Yoakum said.

Since then, Micah 6 has transformed Webster’s vacant playground into three large gardens and a greenhouse that grow food for Sprout. Renovations slated to begin in June 2022 will turn the school building into a small-business incubator and community center. Tenants will include a coffee shop, a health clinic, an immigration nonprofit and the Police Athletic League. The Emerson building will be torn down and replaced by a tiny-house community.

Things were improving, but the neighborhood was dealt a setback in October 2020 when a man was murdered on Dwight Street, near Sprout. “We used to be a neighborhood people passed through. Now it was a place people wanted to stay,” Pyeatt said. “Which made the murder even more shocking.”

To organize a response, the Micah 6 team talked to Andre (last names of residents withheld for their privacy), whom they were helping to launch a lawn care business. “Our philosophy has always been to approach people who are already leaders in the community,” Yoakum said. Andre agreed to organize an event to help the community heal.

The neighbors told Andre that what they needed was landscaping, property beautification and interior work. Yoakum had a realization: “Crimes like that don’t happen in neighborhoods that don’t look like a place where crime happens.” He believed making the community look better would protect its residents.

Working with Andre, Micah 6 scheduled a “Dwight Street Block Blitz,” and in June, he led over 100 volunteers in cleaning up long-neglected yards, clearing vacant lots and fixing broken home interiors.

“It wasn’t just folks from the outside coming in to help,” Pyeatt said. “Everyone in our community helped. Because that’s what Micah 6 is all about.”

Sherry, who lives on Dwight Street, said she wept with joy at the end of the day: “I was overwhelmed. It felt like I had been given a million dollars. Super-blessed by God!”

“It wasn’t just folks from the outside coming in to help,” Pyeatt said. “Everyone in our community helped. Because that’s what Micah 6 is all about.”

Today, Micah 6 is bustling. Many neighbors have joined the gardening program, tending the plants with help from other ELCA congregations.Micah 6 also offers Bible studies for all ages and provides space for a thriving Alcoholics Anonymous ministry.

On Sunday evenings in a small back room at Sprout, Pyeatt, who is enrolled in Pacific Lutheran Seminary’s Theological Education for Emerging Ministries (TEEM) program to become a pastor, leads Underground Church. All who show up are welcomed and included. They share a meal, sing hymns and receive the gospel.

“I’m honored that so many people have brought us into their homes, their lives, their celebrations and their struggles,” Yoakum said. “And I am excited about the lasting impact that our work will have beyond us.”

Scott Seeke
Scott Seeke is pastor of Holy Cross Lutheran Church, Livonia, Mich. He is also a writer best known for the film Get Low and the follow-up book Uncle Bush’s Live Funeral.

Dennis Walker
Dennis is a lifelong Lutheran. He has been a member of Holy Cross Lutheran church in Livonia, Mich. since 2004.

A little becomes a lot

Food for body and soul