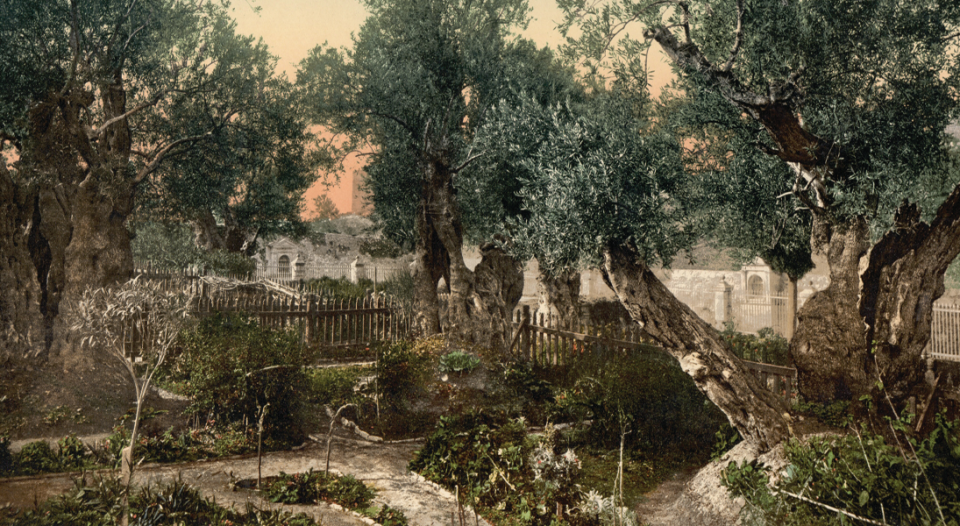 Editor’s note: This article is excerpted from Alexander Jacobs’ Gospel Voices (Wipf & Stock, 2021), a series of imaginative monologues from various characters in the Gospels. The chapter “Josiah of Bethphage” is told from the vantage point of the “certain young man” described in Mark 14.

My cousin Jethro and I were dropping pebbles down the well in the garden called Gethsemane. It was a very hot evening, so we had left our nightshirts at home and were only wearing linen loin clothes. His family had come to Jerusalem for Passover and was staying with my family in Bethphage. We had decided after dinner to wait until it was dark and then sneak out to explore whatever there was to find. We had come to the garden because I knew it would be cool.

Suddenly we heard voices and saw the light from a torch. We ducked into the olive grove and climbed an old tree to watch. We saw a group of men coming up the path. I recognized them from several days ago when they borrowed a colt from our village. They took it back to Bethany, and I was sent along to watch over the colt and to make sure they brought it back.

They had used it for their leader to ride into Jerusalem, and there had been quite a stir—some say it was a riot—at the temple. Their leader, some rabbi named Yeshua, had upset the tables and thrown out the moneychangers, but he left before he could be arrested. All I was worried about was getting the colt back home, which I did.

When I looked again, I recognized him, that rabbi. He was talking to the others, and then he took three of them and moved deeper into the olive grove. We could hear him tell them to wait and keep watch while he went to pray. I told Jethro to be silent, and we climbed down from the tree. We snuck around to where that rabbi was sitting on a large rock. He was mumbling something. I couldn’t hear exactly what he was saying, but I noticed he was sweating a lot. In fact, in the dark, it looked like he was sweating blood. I believe he was terrified.

The rabbi got back up and went back to the other men, who had fallen asleep. He shook his head and said, “Asleep! You couldn’t stay awake for just an hour!” He turned and went back to the rock and prayed some more. We waited and watched until he went back and found them still asleep. He roused them and said, “The spirit is willing, but the flesh is weak. Too much good food and wine. You had better be careful that you don’t fall into a deeper sleep and miss what Adonai is doing tonight.” The others slowly woke up, and none of them said anything. They all looked ashamed.

When I looked again, I recognized him, that rabbi.

We were about to sneak away when we heard more voices down the path. The rabbi said, “It is enough! The time has come! The Son of Man is about to be handed over to sinners.” Jethro and I quickly climbed back up into the olive tree to watch.

A large group of men carrying torches entered the garden. There were temple guards and others with swords and clubs. They blocked the path. One man came forward, then hesitated. We could hear some of the rabbi’s men say, “It’s Judas! What is he doing with this crowd?” The one whom we guessed was Judas stepped closer and said, “Rabbi,” and then kissed him. The guards jumped forward and laid their hands on Rabbi Yeshua, who shouted, “So you have come to arrest me with swords and clubs as if I were a bandit. Why didn’t you arrest me when I was in the temple teaching and preaching? Why wait until after dark?”

The disciples had come forward to protect Rabbi Yeshua and were pushed back and threatened. One disciple, a tall man, pulled out a sword and swung at those trying to arrest the rabbi. Someone ducked, but not before the sword struck his head and cut off his ear. Jethro screamed, but luckily no one heard him. The rabbi turned to the tall man and angrily said, “Put away your sword—if you live by the sword, you will die by the sword.” Then he reached down and picked up the severed ear and put it back on the bleeding man’s head. The bleeding stopped, and the man’s ear, believe it or not, was healed. Jethro and I looked at each other in disbelief.

All at once, all the rabbi’s followers ran away into the night. One guard yelled, “Let them go! We have our man! Now we will take him to the high priest!”

The crowd turned to go back to Jerusalem. The only one left standing in the middle of the garden was the one they called Judas.

Jethro said, “I think he is crying. We better go too.” We climbed down the tree and Jethro started back toward Bethphage, but I was still curious. I told him, “Go on back. And be quiet! Don’t make any noise when you crawl in the window.” He left, and I followed the crowd.

I must have gotten too close, because one man saw me and yelled, “Well, look at this! Another disciple!” He chased me and grabbed at my loincloth. Luckily it ripped away, and I managed to get away—naked but free. I ran all the way home, praying that I did not run into any neighbors. I jumped in the window and landed on Jethro, who was still awake. “What happened?” he said. “Don’t ask!” I replied. “Go to sleep!”

A monologue from John’s passion: a disciple

The Three Days: traditions of Maundy Thursday, Good Friday and the Vigil of Easter

Lectionary blog: A season to examine ourselves

The path of Jesus