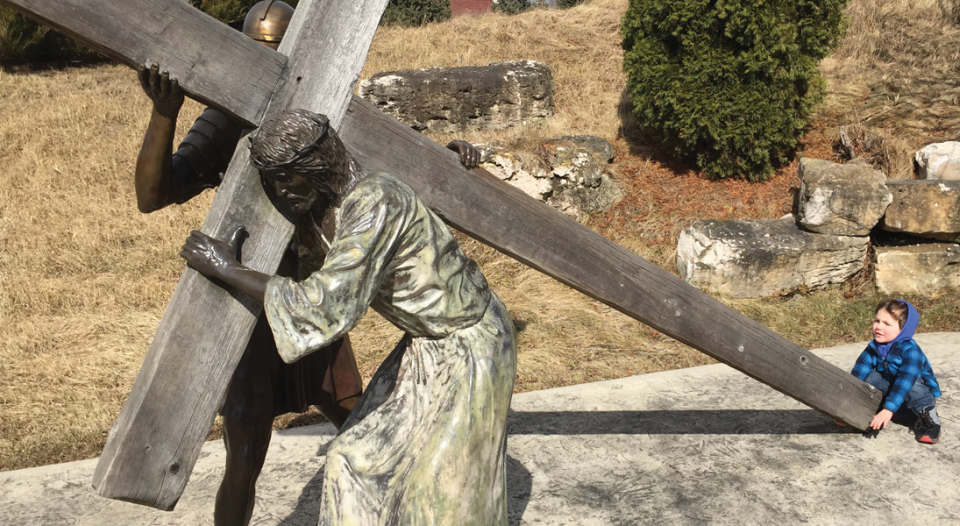 The writer’s son tries to help Jesus carry the cross at the Shrine of Christ’s Passion, a Stations of the Cross attraction in St. John, Ind.

When I lived in Jerusalem, I dipped into the Old City a few times a week to visit my favorite falafel stand. Frequently I would encounter a human traffic jam behind a group of people working together to carry a cross. I had no idea what the Christian pilgrims were doing.

Once, while stuck behind a particularly slow group, I took a chance and asked one of the participants what they were doing. The older Polish woman was incredulous that I had never heard of the Via Dolorosa—the path that pilgrims have walked through the Old City for centuries to reenact Jesus’ crucifixion journey. She explained that after a lifetime of meditating on the Stations of the Cross, it was her dream to come to Jerusalem to walk in the steps of Jesus.

My next question truly revealed my ignorance to her: “What are the Stations of the Cross?”

Historically, Christians have sought to have a bodily experience of Jesus’ last moments prior to his resurrection. For hundreds of years, the only way to physically walk through Jesus’ passion journey was to make the difficult, expensive and dangerous trip to Jerusalem. During the Crusades, as Christians and Muslims fought over possession of the Holy Land, the journey became even more challenging.

To help Christians who couldn’t risk their lives nor spend months or years traveling to experience the path of suffering that Jesus chose to submit himself to on their behalf, churches in Europe began to construct images or statues that would help people imagine the journey from Pilate’s courtroom to the tomb. The Stations of the Cross became a mini-pilgrimage that one could take in their own church building.

At roughly the same time that Martin Luther was preaching about God’s accessibility to all Christians and the priesthood of all believers, Franciscans worked to erect Stations of the Cross across Christendom so that all Christians would have access to physical models of Jesus’ salvific suffering and death.

I could only ignore him saying “Daddy, I want to go see Jesus!” so many times before we made a special trip.

Christian practices around the Stations of the Cross have developed and multiplied. When my eldest son was still very young, he kept seeing billboards advertising the “Shrine of Christ’s Passion” as we drove by St. John, Ind. I could only ignore him saying “Daddy, I want to go see Jesus!” so many times before we made a special trip.

A collection of life-size statues helped my son and me process Jesus’ suffering, death and resurrection in ways we never had previously. At a particularly poignant moment, at the station where Jesus stumbled and Simon of Cyrene was forced to help him, my 2-year-old tried to pick up a large wooden cross, saying, “I want to help Jesus too.” That sort of physical identification with Jesus’ struggle just isn’t possible without models that children can see and touch.

During a Lenten practice at another congregation, people took turns running booths that explained the Stations of the Cross and gave everyone who stopped by a memento of Jesus’ experience. When hearing about how Jesus was condemned to death, participants were given a single thorn. When people heard about how Jesus was given his cross, they were presented with a tiny cross.

At the end of the process, participants had physical reminders of every step of Jesus’ journey to Calvary. Interestingly, some people didn’t visit all of the booths in one visit. Many came on Wednesdays and Sundays throughout Lent to visit one or two stations each time so they could meditate separately on each part of Jesus’ passion.

The story, as we read it during Holy Week, can be overwhelming. By having time to decompress the details and experience them over weeks, participants were able to slowly contemplate how Jesus poured himself out on our behalf.

One of the most visceral expressions of the Stations of the Cross is a “Living Passion,” similar to a “Living Nativity.” Passion plays in which actors portray the narrative are well-known, but Living Passions, in my experience, don’t involve speaking actors or a stationary audience. Instead, participants journey from station to station and behold humans silently portraying Jesus’ mistreatment at the hands of the Romans—and his love and grace for those he encountered along the journey.

In whichever way congregations and individual Christians choose to portray the Stations of the Cross, the slow, intentional meditation on the material reality of Jesus’ journey from life to death—and then death to life—has been a profound blessing to Christians for centuries. Consider how your congregation might help others experience the physicality of Jesus’ suffering, death and resurrection—all because of his love and grace for the world.

“The Way of the Cross,” found in This Far by Faith and on sundaysandseasons.com, is an ELCA liturgy for Stations of the Cross.

Read The Stations of the Cross by Paul E. Hoffman, an ELCA pastor (Wipf and Stock, 2010).

Finding the good in Good Friday