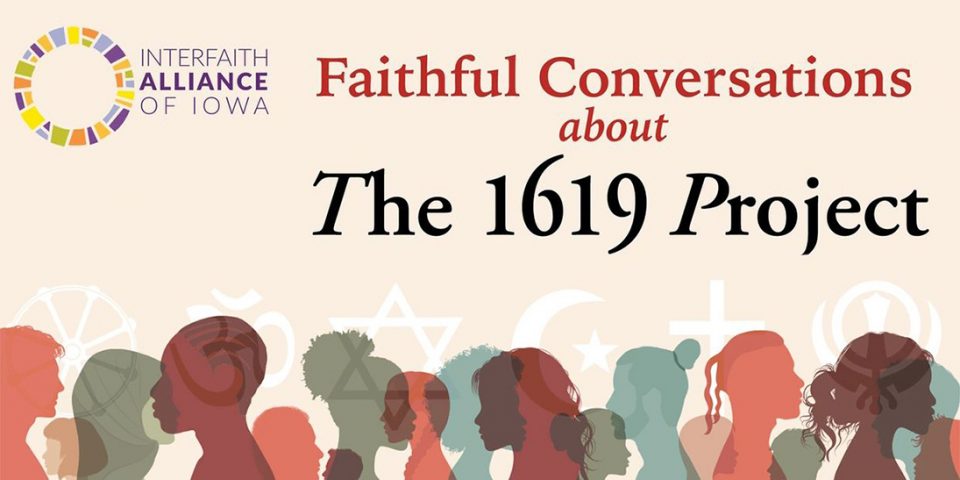 Courtesy of the Interfaith Alliance of Iowa

The 1619 Project has proved a hot topic since its introduction in August 2019.

A collection of long-form journalistic essays by writers from the New York Times, the 1619 Project’s goal is to reframe U.S. history by repositioning the consequences of enslavement and the contributions of Americans of African descent. The project asserts that both are integral and essential to U.S. culture and society.

Developed under the direction of investigative reporter Nikole Hannah-Jones (who was awarded a Pulitzer Prize for one of its essays), the initiative is based on an ongoing, multifaceted body of work. The full initiative includes events, a podcast and the anthology The 1619 Project: A New Origin Story (One World, 2021). The project dates America’s origins not to 1776, when the Declaration of Independence was signed, but to 1619, when chattel slavery was introduced.

As a result, the project has sparked many debates—not least in Iowa, said Erika Uthe, director for evangelical mission and an assistant to the bishop in the Southeastern Iowa Synod. Students, educators and community members statewide have shown strong interest in the project.

But some lawmakers have led a charge to ban it from public institutions. A state law that took effect in July 2021 limited what can be taught in schools about systemic racism. The law doesn’t specify 1619 Project curriculum, but lawmakers often refer to the initiative as an example of unacceptable content. As a result, educators fear losing funding over curriculum disputes and complaints.

“[Iowa clergy] decided that if it is illegal to teach the 1619 Project in schools, we’d make it available in churches,” Uthe said.

“[Iowa clergy] decided that if it is illegal to teach the 1619 Project in schools, we’d make it available in churches.”

Uthe and other members of the Interfaith Alliance of Iowa developed the study series “Faithful Conversations About the 1619 Project.” The resource, created through the alliance’s Faithful Voices for Racial Justice project, emphasizes that “many communities of faith justified enslavement and benefited materially from it, or, on the flip side, worked for its elimination, [so] it is critical the faith community intentionally study slavery and its lasting impact on the generations during and after.”

In February synod congregations participated in a six-week study that used the resource. Members from 16 congregations attended the early sessions, and registrations increased in subsequent weeks.

Participants gathered virtually to watch 30-minute videos featuring interfaith leaders from across the state discussing that week’s assigned essay, which was followed by their own 30-minute conversation and prayer time. Free videos, essays and discussion tools are available online, and the Interfaith Alliance of Iowa encourages all faith communities to use them in hosting their own small-group studies.

“This is a start”

Among the participants in the study series was Rebecca Wiese, a recently retired physician who has served as a deacon at Grace Lutheran Church, Davenport, since 2005.

Wiese is saddened by Iowa’s suppression of educational content and pointed to the state’s long-held reputation for educational excellence. “We need more of us to say, ‘No, we’ll learn about these things,’” she said. “We absolutely should learn these things and talk about them in our churches, because faith does play a role in how we live our lives. Our faith does include what we do in the voting booth, with our time, with our money, with all our efforts. The 1619 Project is a tool we can use to get the church involved, from multiple faith perspectives.”

The content is a far cry from what Daniel Husmann learned growing up in Anamosa. He didn’t interact with African Americans until his teens, when he took a job at a Cedar Rapids grocery store in a racially diverse neighborhood where he had co-workers and customers of African descent.

“Why don’t we realize we owe a lot to those slaves? Why weren’t they lifted up as heroes—as patriots?”

“The 1619 material is not as surprising to me as it would have been two years ago,” he said. “I do really find it interesting that if we look at the arrival of that first slave ship in 1619 as the start of our country, we’d see we had 250 years of an economic system that benefited from slavery’s free labor. That is probably what gave us such a solid start toward America becoming what it is today. It is not a good thing, of course, that we benefited from this, but it’s where we are. Why don’t we realize we owe a lot to those slaves? Why weren’t they lifted up as heroes—as patriots?”

Wiese agreed: “We need to talk about these things as people of faith so we can do something about them. We have a long way to go, but this is a start.”

Read “Faithful Conversations About the 1619 Project.” Read an interview with Erika Uthe.

The vocation of citizenship