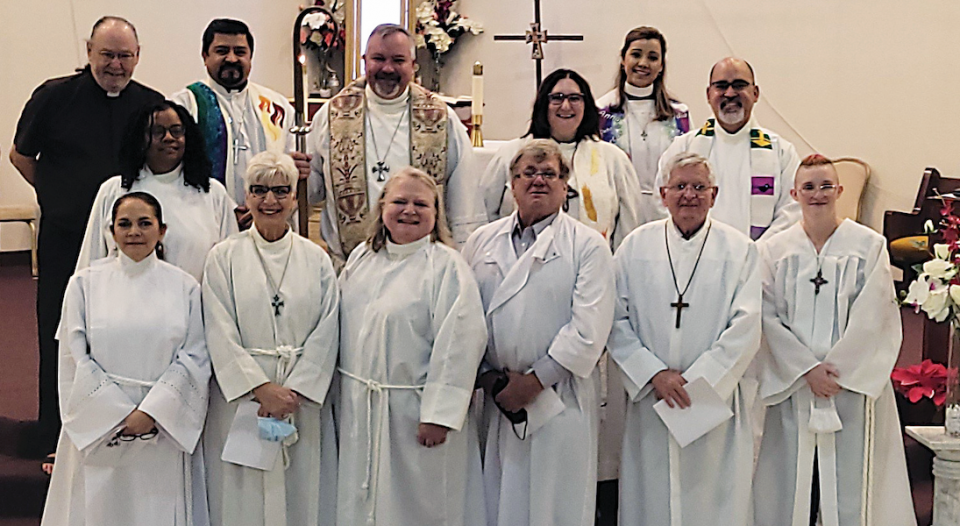 In January, the Northern Texas-Northern Louisiana Synod celebrated the graduation of participants in its Parish Lay Ministry Academy and Secondary School of Theological Education.

Harold “Dutch” Rinker’s ordination as an ELCA pastor on April 9 culminated a 20-year journey that began when he signed up for lay minister training in the Upper Susquehanna Synod. The training enabled him to lead Sunday worship at many of the synod’s small, rural congregations while keeping his full-time job as a Pennsylvania state trooper.

When he retired from the force three years ago, he entered the candidacy process for ordained ministry.

“I can’t imagine that I would be on the road to ordination had I not dipped my toe in the authorized lay worship program,” said Rinker, pastor of Zion Lutheran Church, Renovo, Pa.

Rinker’s story is becoming more common in the ELCA as synods and seminaries educate lay ministers to serve congregations. For some, like Rinker, the training is a pipeline to ordained ministry, while others simply enrich their congregations by serving in such areas as youth, education, administration, outreach and mission. The growth in lay ministry is adding energy and flexibility to church life, pushing the ELCA in new directions.

“We’re practicing for a new kind of future where ministry is seen as broader than just people who went to seminary,” said Dave Daubert, an ELCA pastor and lead consultant at Day 8 Strategies, which offers consulting and resources for church groups and leaders.

The number of trained lay leaders—and the need for them—has risen largely because of shifts in worship attendance. “Our congregations have been shrinking very rapidly,” Daubert said. In 2000, median church attendance in the United States was 100, and before the pandemic, the median for ELCA churches was 63. “It means most of our congregations run 30 to 50 people in attendance,” he said.

To cope, synods have, over the years, ramped up programs to train and authorize laypeople for Sunday worship leadership, mostly in smaller, rural congregations.

“That’s been the great success story,” said Phil Heinze, dean of the Northern Texas-Northern Louisiana Synod’s Parish Lay Ministry Academy (PLMA). Since 1999 the academy has trained several hundred laypeople to serve their congregations, about 10% of whom have received authorization to lead Sunday worship.

More will be needed. “I think you’re going to see an increase in need not just in our synod but across the country, especially in the small, rural congregations,” Heinze said. “Say you have 20 people in a congregation, maybe your building’s paid for, but you can’t afford a clergy salary and benefits.”

Necessity has driven increases in not only lay ministry training but also in flexibility and the willingness to open congregational leadership and education beyond the traditional model—a pastor who goes to seminary full time to earn a Master of Divinity degree. Because of financial limitations or obligations to work or family, this model just doesn’t work for many people.

Training programs for lay leaders, Daubert said, have “opened the doors to ministry to people who probably felt called under the old system but couldn’t figure out how to free themselves from the life they had in order to be pastors.”

Many synods are expanding or creating such programs to meet the current and future needs of the church. For example, the Northern Texas-Northern Louisiana Synod partnered with the Arkansas-Oklahoma Synod to launch a pilot program in 2018 for Spanish-language candidates. Their Secondary School of Theological Education works with Latinx laypeople who typically have gone through PLMA and want advanced education, said Irma Bañales, the synod’s director for evangelical mission.

The school’s graduates, many of whom go on to become pastors, will serve well in congregations that are bilingual, Bañales said, expanding their Latino outreach or exclusively serving Spanish-speaking communities.

Though some laypeople enroll in synodical training to serve as Sunday worship leaders or, eventually, to seek pastoral ordination, many simply desire to learn more about faith and church or to serve their congregations in a particular area. For those learners, PLMA offers certificates in stewardship, Lutheran identity, preaching and spiritual care.

Bringing specialized knowledge to the congregation can help it run smoothly. Many administrative tasks are highly specialized, such as church finances, record keeping, constitution and incorporation, and dealing with other legal issues, said Craig Miller, assistant to the bishop and director for evangelical mission with the Upper Susquehanna Synod.

“Those are the things we need to pay more attention to,” Miller said. His synod is exploring ways to expand its lay leadership training to help council members, congregation presidents, treasurers, secretaries and others fulfill their congregational roles more effectively.

Trained lay leaders often have much more to offer than technical skills. Serving congregations while also handling job and family commitments, most of them have a positive, can-do attitude. “They bring the passion and the interest,” Daubert said. “They’re doing it out of a sense of fulfillment.”

That was the case for Rinker: “If it was just for that church and on that Sunday for an hour, I was honored and blessed and humbled to be a servant of God for those people.”

A unified word and service roster