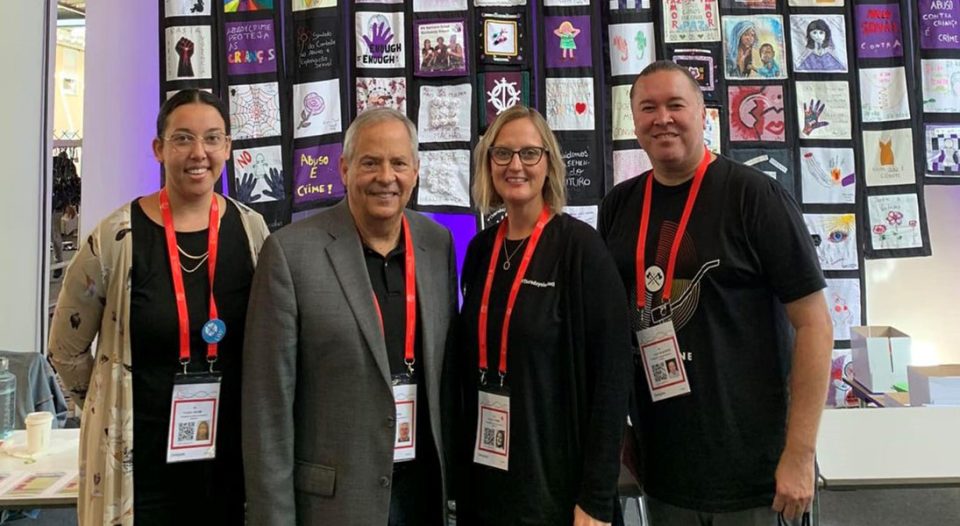 The 11th Assembly of the World Council of Churches (WCC) convened in Karlsruhe, Germany, Aug. 31–Sept. 8. Representatives of the ELCA were among the more than 4,000 delegates, participants, observers, students, resource people and ecumenical partners gathered under the theme “Christ’s Love Moves the World to Reconciliation and Unity.”

All the WCC’s assembly themes have historical resonance, but this one—the first to include the word “love”—was especially poignant amid today’s global challenges. The churches were reunited in Karlsruhe as witnesses to Christ’s compelling love, their presence a testament to seeking reconciliation and unity even amid the ravages of war, racism, climate change, gender-based violence and COVID-19. The 11th Assembly adopted a message to the world, fittingly titled “A Call to Act Together,” and approved a “Unity Statement,” which offers the world an ecumenical understanding of the distinctive call to Christian love.

Highly anticipated by onlookers was how the assembly would speak to such current global concerns as Palestinian self-determination and the war in Ukraine. The assembly adopted four public statements and four minutes that affirm the WCC’s dual role in providing prophetic leadership and a platform for dialogue. The formation of two new commissions, one on health and healing and the other on climate change and sustainable development, indicate critical areas of collaboration as the WCC moves forward.

The assembly works through consensus. Its process—in which the moderator “tests the mind” of the assembly and people can have their dissent recorded—prioritizes listening and dialogue as an alternative to majority rule. Practiced in all plenaries, consensus supports the body of Christ as, together, participants seek to discern the mind of Christ.

Through the WCC, the ELCA participates in the remarkable ecclesial and theological diversity of the council’s churches.

The assembly serves as the highest legislative authority of the WCC—a worldwide ecumenical fellowship of 352 member churches—yet it provides much more than governance. By design, the schedule afforded ample means for participants to learn and grow together. Daily prayer, as well as thematic plenaries and conversations, offered a breadth of opportunities to reflect, exchange ideas and inform the future work of the council. Confessional and regional gatherings, weekend excursions, cultural programs and fellowship over meals added depth to attendees’ experience of the assembly.

Toward the end of the assembly, the next phase of the WCC began as leadership was elected and outgoing leaders were honored. The ELCA will have two seats on the next Central Committee (the WCC’s governing board) and hopes to be represented on various commissions.

Through the WCC, the ELCA participates in the remarkable ecclesial and theological diversity of the council’s churches, sharing and receiving gifts within the ecumenical fellowship. The ELCA also participates in the diversity of God’s people through the WCC. Indigenous people, people of all races and ethnicities, people of different gender identities, people of different abilities and disabilities, and people of all ages enliven the common witness of the WCC and its member churches. The assembly is truly a microcosm of the unity in diversity that is the body of Christ.

As the ELCA has declared, “Ecumenism is the joyous experience of the unity of Christ’s people and the serious task of expressing that unity visibly and structurally to advance the proclamation of the Gospel for the blessing of humankind” (“A Declaration of Ecumenical Commitment”). This perfectly sums up the 11th Assembly of the World Council of Churches. It was both a serious expression of Christian unity and a joyous experience of it.