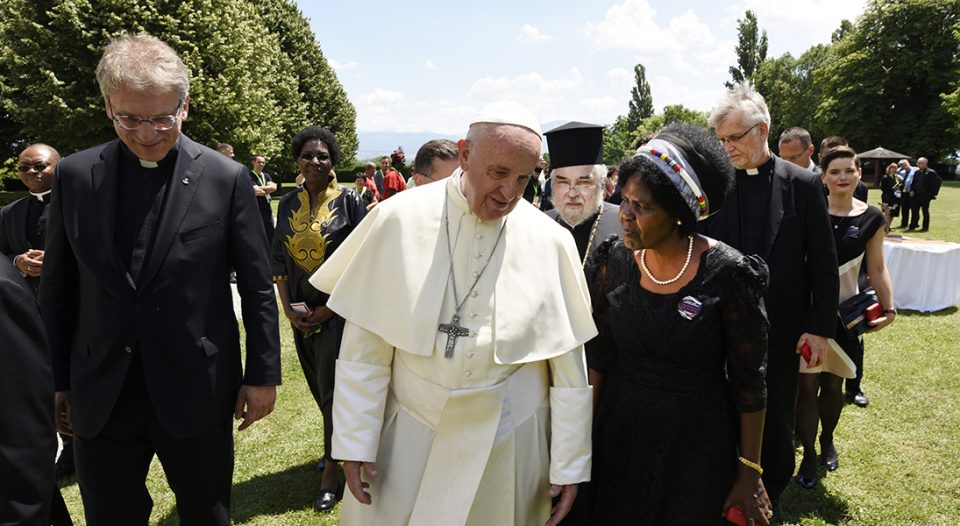 On June 21 in Geneva, the World Council of Churches received a landmark visit from Pope Francis as part of an ecumenical commemoration of the Council's 70th anniversary.

It was a moment in church history few engaged in ecumenism will forget when Pope Francis visited the World Council of Churches (WCC) June 21 in Geneva, Switzerland, as the organization of churches celebrated its 70th anniversary.

“The presence this week by both Ecumenical Patriarch Bartholomew I for worship at St. Pierre Cathedral and Pope Francis’ historic first-ever visit to the Ecumenical Center are certainly highlights of this occasion,” said Carlos Peña, a member of the WCC Central Committee and former vice president of the ELCA.

The WCC includes 350 member churches representing more than 500 million Christians. The organization, which calls itself “A worldwide fellowship of churches seeking unity, a common witness and Christian service,” includes “most of the world’s Orthodox churches, scores of Anglican, Baptist, Lutheran, Methodist and Reformed churches, as well as many United and Independent churches” in 110 countries.

The pontiff’s visit to Geneva included ecumenical prayer and meetings with WCC leadership, followed by Holy Mass led by Pope Francis at Palexpo, a massive public convention center in Geneva. The theme for the visit was one of unity: “Walking, praying, and working together.”

It was a message Pope Francis spoke about during a prayer service in the chapel of the Ecumenical Center.

“We remain hopeful, amidst all the turmoil in our world, in our ongoing work of the pilgrimage of justice and peace.”

“For us as Christians, walking together is not a ploy to strengthen our own positions, but an act of obedience to the Lord and love for our world,” Pope Francis said.  “Let us ask the Father to help us walk together all the more resolutely in the ways of the Spirit.”

While the Roman Catholic Church is not a member of the WCC, Pope Francis spoke at length about how the Catholic Church and the council work hand-in-hand in matters that impact the lives of Christians worldwide. It’s a message not lost on Peña, given the WCC mission of faith and unity.

“As we gathered in Geneva to mark the [anniversary], we are indeed amazed at what a journey it has been,” Peña said. “We not only looked back at all the achievements of the past 70 years, but more importantly, looked forward to all we have left to accomplish in our call to search for Christian unity. We remain hopeful, amidst all the turmoil in our world, in our ongoing work of the pilgrimage of justice and peace.”

The trip marked the first time a pope had come to Geneva specifically to visit the WCC. The last papal visit there was in 1984, when Pope John Paul II spent time in Switzerland. The only other previous visit had been by Pope Paul VI in 1969. However, Peña said this history-making day was a reminder of the work that has already been done and that is left to do by Christians worldwide.

“It affirms that while we have not yet achieved all that we have set out to do, we are on the right path,” Peña said. “The visits reinforce high leadership support for unity in the one body of Christ.”

An audience with Pope Francis

From Catholicism to Lutheranism: seeking reconciliation in a mixed-faith family