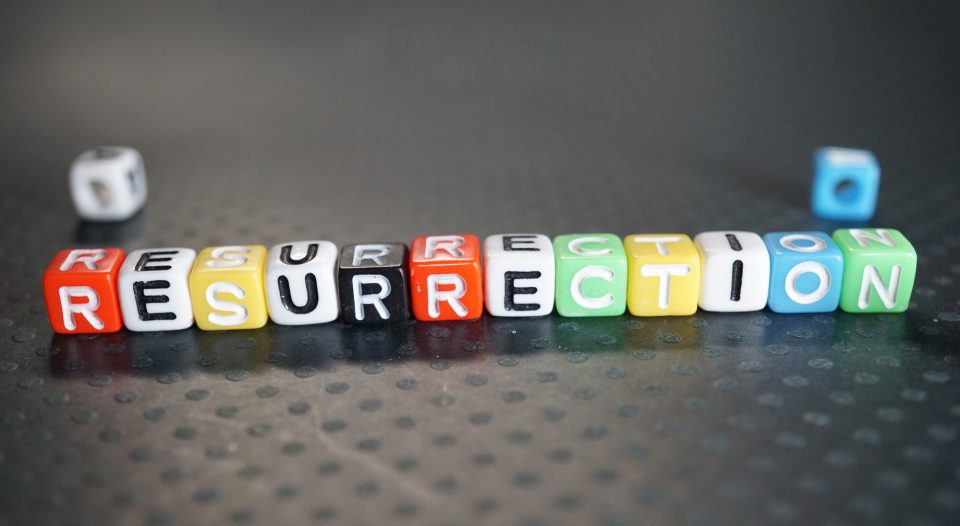 All too often I feel like I’m lost in the weeds of Christianity. Which of the denominations and non-denominations has the most compelling vision of Christ? Which soteriological model best describes Jesus’ saving work? Can God make a rock so big that God can’t move it? Did “Knight George” (aka Martin Luther) or Jean Calvin have the better beard? All too infrequently I come back to the central issue: Jesus’ victory over the forces of sin and death must change everything (and already has). His resurrection after his unjust murder is the thing. Everything else flows from that. This week’s lectionary texts bring to the foreground the issue of resurrection.

First, we want to remember that whatever the author of Job was or wasn’t, that person was not a Christian. When Job speaks of suffering, death and the grave, we shouldn’t automatically assume that those concepts mean the same thing as they do for us. In the same way, when Job spoke about life after death, that concept didn’t mean the same thing to the author as it does for us today.

Nevertheless, Job, despite his morally inexcusable suffering as part of a heavenly/hellish wager, confessed that he knew his redeemer lived (Job 19:25). Not only did his redeemer live, but Job, even after his skin and flesh were removed (presumably by worms), believed he would once again live and behold God from his own flesh (26) and see God with his resurrected eyes (27). While his “friends” told him that his theology and moral calculus were impossibly flawed, Job stubbornly clung to the belief that his assaulted body wasn’t the end of his story, and that the death of his children and the disease that he endured would one day be undone. He knew death wouldn’t be the end of the story of his body.

God doesn’t give up on physical bodies but redeems the dead, and this shapes how Christians think about life, death, justice, bodies, sin and righteousness.

In the first century, powerful men gathered against Jesus to attack his theology and understanding of how the world worked, just as Job’s friends did to him. In Luke 20, the priests and scribes, mostly belonging to the ideology of the Sadducees, were trying to undermine Jesus. First, they wanted to know by whose authority Jesus was preaching and teaching in the temple—in their domain (1-2). Jesus’ answers reinforced his popularity with the crowd while making the priests look silly. The scribes and priests didn’t dare to publicly arrest Jesus. Instead, they sought to draw him into rhetorical traps (19-20) to isolate him from his Jewish supporters. Their first attempt to ambush Jesus was to trap him into committing “treason” against the occupying Romans and, therefore, undercutting Jewish hopes for freedom. Jesus wisely found his way out of their trap.

The Sadducees’ next trap was also meant to peel off support for the preacher and miracle-worker from Galilee. This time, instead of tempting him with politics, they sought to ridicule Jesus’ religious convictions.

The Sadducees loved to mock the upstart Pharisees for the latter’s belief in the resurrection of the dead. On this occasion, they referenced a popular story from the book of Tobit (6:13-17) about a woman whose seven husbands had all died on their wedding nights before they could conceive children. Brothers at that time were obligated to marry their brother’s widow to raise up children to preserve the deceased’s name (Deuteronomy 25:5). The Sadducees then asked Jesus whose wife the woman would be in the resurrection. As he had done earlier, Jesus evaded their rhetorical trap by undermining the premise of the question. God will raise humans after death. But in the resurrection, people don’t marry and aren’t given in marriage (Luke 20:35).

Jesus went further in responding to those who mocked his promise of resurrection. Many passages in the Psalms, Job, Daniel and elsewhere can be interpreted to point to resurrection. Jesus focused on the books of Moses—the Sadducees’ favorites—to point out that they should have agreed with the Pharisees in hoping for the resurrection of the dead. Moses met the Lord as “the God of Abraham, the God of Isaac and the God of Jacob” (Exodus 3:6). Jesus told them that God wasn’t the analog of the Greek god Hades, as a lord of the dead. Instead, God is the God of the living (Luke 20:38). Even though Abraham, Isaac and Jacob died, God regarded them as already raised to life, even as we all await the general resurrection of all the dead.

Some teachers of the law, presumably Pharisees, loved Jesus’ answer (39). But others, the chief priests, for example, remained antagonistic to this interloper from Galilee and his ideas about the resurrection. Even in Jesus’ day—and certainly when Job was written—the idea of the resurrection was controversial. The same is true in our day, and the resurrection hope (that we share in some form with our Jewish and Muslim neighbors) is rejected and even mocked by others.

God doesn’t give up on physical bodies but redeems the dead, and this shapes how Christians think about life, death, justice, bodies, sin and righteousness. Jesus’ insistence on the resurrection—not just his, but ours—gives us courage and focus to follow Jesus in life, death and life again.

Faith as participation in God’s being

We are woven together