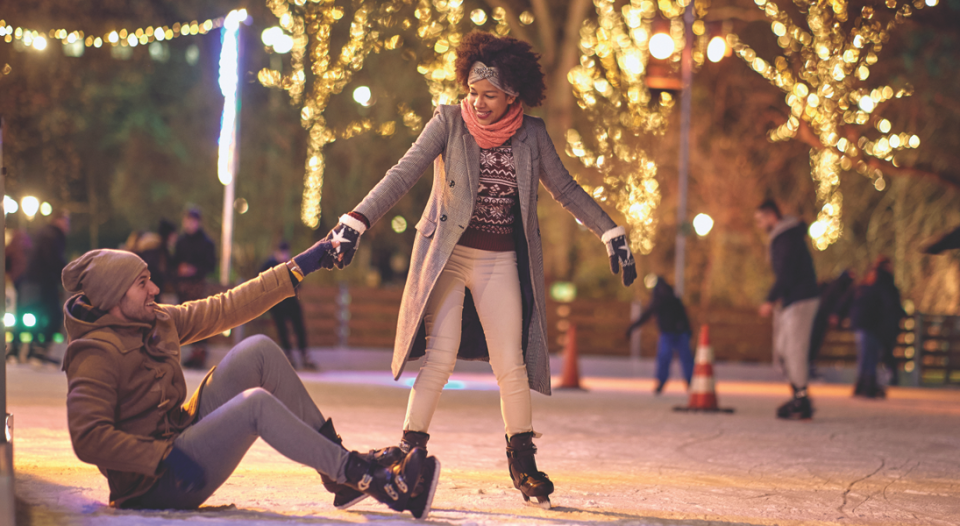 Last Christmas a corner of Chicago’s Wrigley Field was transformed into an ice skating rink. Skating at the rink was a far cry from the ice skating I did on the frozen pond of my childhood, where there were tree roots poking through the ice and slushy lumps to avoid. This was ice straight out of a movie: glittery, smooth and regularly steamrolled by a Zamboni.

I’m not the best at skating, but I manage to stay upright. Something about gliding friction-free across the ice is magical, albeit artificial.

Ironically, the beautiful winter wonderland inside the ballpark was surrounded by the gritty, gravely city. As soon as you leave the park, you can feel it: Chicago can be relentless in the winter. The dirty snow at the bus stop doesn’t shine like it does at the hot cocoa stand next to the ice. The city is divided by money, sprawling highways and old segregation lines that left a deep and lasting mark.

In recent years things have been particularly tough. Some people have been affected by COVID-19, others by job loss. Many seem to be tired and overworked. There are so many challenges. There is so much friction. No one glides gracefully through this city.

If the friction of it all doesn’t trip us up, it can slow us down and help us think about the kind of world Jesus calls us toward.

Many places are experiencing friction like Chicago’s. Life hasn’t been smooth in recent years. We’re living through a lot of change right now in our families, our workplaces, our schools and even our churches. Neighborhoods are shifting, industry is changing, and it can all be really uncomfortable.

We’ve begun asking uneasy questions such as “What does it now mean to be a good man and equal partner to women?” or “How can I afford to give more money when the cost of living is rising?” We’re being asked to wrestle with the past in new ways.

We hear the word “friction” and think it’s a bad thing, some sort of conflict. But friction is only a force that opposes motion. It causes us to move more slowly, which isn’t necessarily a problem. Friction is the reason my snow boots grip the slick sidewalk when I walk.

If the friction of it all doesn’t trip us up, it can slow us down and help us think about the kind of world Jesus calls us toward. Pausing and reflecting go hand in hand with Epiphany, the church season that follows Christmas.

Epiphany begins with the bright star of wonder that guided the magi to see the newborn Son of God and ends with the adult Jesus transfigured and dazzling on a mountaintop. It’s also a season of piercing light that illuminates things we might not normally notice. During Epiphany, God hands us a magnifying glass, or shines a celestial spotlight down on something, and says: “Take a closer look.”

Many of us understand God as the one who comforts us, calms us and brings us peace, but God is also the one who agitates us. After Jesus called those first fishermen, Simon Peter and Andrew, to be his disciples, he engaged them in hard conversations about generosity, compassion and justice.

The same goes for us. Following Jesus is a way of life, and when we put the teachings of Christ into conversation with our own lives, we will be challenged.

A time to pay attention

A blessing for the new year and each day