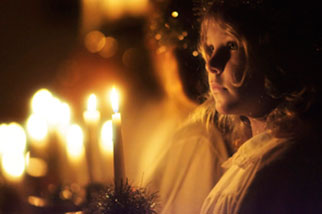 At this time of the year many people in Scandinavian countries are living on the edge of darkness.

With 21 hours of night in some areas and only six to seven hours of daylight in the brightest parts of the region, winter nights are cold and long.

Poet John Donne wrote, “Tis the year’s midnight, and it is the day’s Lucy’s, who scarce seven hours herself unmasks,” from his poem, “A Nocturnal Upon St. Lucy’s Day, Being the Shortest Day.”

Before the introduction of the Gregorian calendar, St. Lucia’s Day, now December 13, fell on the winter solstice, the shortest day of the year.

On the morning of St.Lucia’s Day, as the darkness sets on Northern Europe, the eldest daughters in households across Scandinavia dress in white robes with red sashes and wreaths with lighted candles on their heads.

They carry a breakfast of coffee, gingerbread cookies and sun-colored “St. Lucia” saffron buns (called in Swedish, lussebulle or lussekatt), to their parents’ bedrooms. The younger daughters of the household follow them carrying a single candle. Their brothers, called “star boys,” wear tall pointed caps.

Santa Lucia Day is one of the few “Saints Days” celebrated in Lutheran congregations and homes, schools, work places and homes for the elderly, especially in Denmark, Sweden, Finland and Norway. In Sweden, each town and village crowns a “Lucia” every year.

A symbol of hope, light

Lucia symbolizes hope and the return of light to the world. Against the harsh landscape of a dark winter, she signifies a more contemplative atmosphere, with a glow of warmth from the candles that she and her attendants carry.

Fittingly, the actual story of Santa Lucia reaches into the dark days of history.

There was a young woman from the Sicilian city of Syracuse. She was of noble birth and came from a prosperous family.

With a name derived from lucis or light, Lucia was a Christian, during the reign of the Roman Emperor Diocletian — who sent forth an edict to eradicate Christianity.

According to tradition, St. Lucia took food to Christians hiding from persecution. She wore candles in a wreath around her head to light the way.

It is said that Lucia refused to marry a young pagan to whom she was betrothed. He in turn gave her up to the authorities. Hell hath no fury like a young pagan scorned!

She was miraculously delivered from a sentence of a life of prostitution. She suffered torture, which included having her eyes gouged out, prior to her martyr’s death in A.D. 304. Many Renaissance paintings depict St. Lucy carrying her eyes in a tray.

The traditional red sash tied around the waist of each allegorical Lucia is symbolic of the blood shed from her violent death. The crown on her head streams a light, evoking the old medieval legends.

ELCA congregations in the United States celebrate Santa Lucia Day as one that carries a message of the light and hope of Christ.