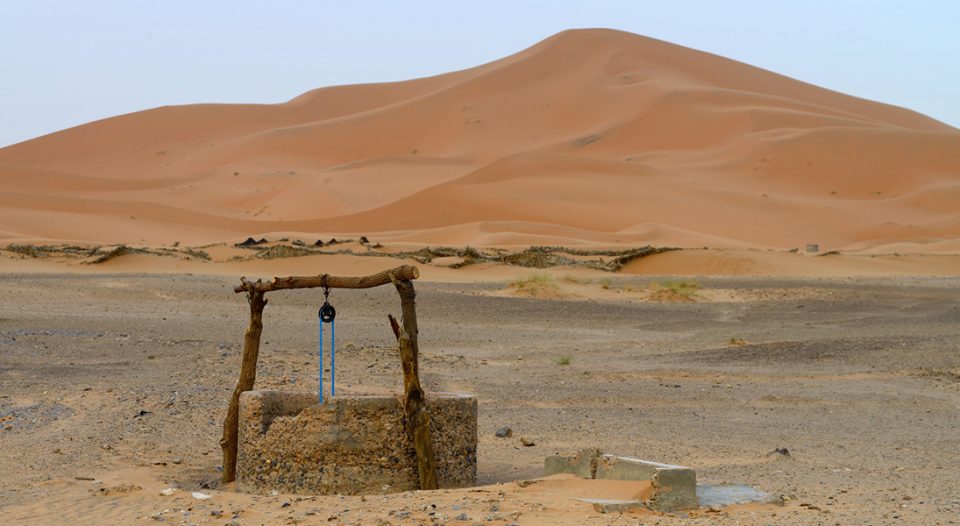 I can see a gorgeous body of water, Commencement Bay, from my church office window. Walk down the street a couple blocks to our home, and you can sense the water’s moods: One day it blankets itself in dense, quiet fog; the next, it comes out to flirt with the sunshine that here and there flirts right back at it.

There are umbrellas all around, everywhere you go—but very few people take advantage of them. By the time the umbrella is open, the sky can close. And when it does really pour—and I mean really pour—the wind often moves the water with such power that you’re out of luck keeping that umbrella intact.

People ask me, having relocated here, if I ever get tired of the rain, the wind, the rain.

Every time I say, no.

Rain—like all water—really does bring life. Ferns, moss, trees, blackberry bushes thrive as it pours. As the sun lifts, everywhere, it is a sea of shades of green.

We can guess that the woman had come to the well at noontime because she was, perhaps, ostracized from her community. She had been married a whopping five times, and the man she was currently with wasn’t her husband. More than a regular with other community members who likely took a stroll down to the well in the morning hours with their children, she was likely a subject of scorn and gossip.

Maybe the nameless woman wanted a little peace and quiet.

Maybe she wanted to have a drink of water without someone, for once, making a snide comment about her life.

Whatever, the case, Jesus—who, as a Jewish man and teacher of the holy shouldn’t have even been acknowledging her in the first place—looked at her, spoke to her, and invited her to have some water that would once and for all quench her thirst.

He was the rain.

He knew who she was, how she lived. Rather than shunning her, however, he invited her into a deep discussion on what matters when it comes to worship.

Rather than looking at her with disgust, Jesus said that, through him, the barriers that might have kept people like her from worshiping God weren’t there anymore. Rather than coming down on her in hard and swift judgment, he stayed with her, in an engaging relationship of mercy and love.

If water in a well deep in the desert can quench a body’s vital need for drink, thirst of the heart and of the soul also is quenched in this Jesus the Samaritan woman bid her townspeople to come and meet.

Mercy, acceptance, engagement, care—all from no less than God’s own son—are in and of themselves the water of life.

Read part one in this series.