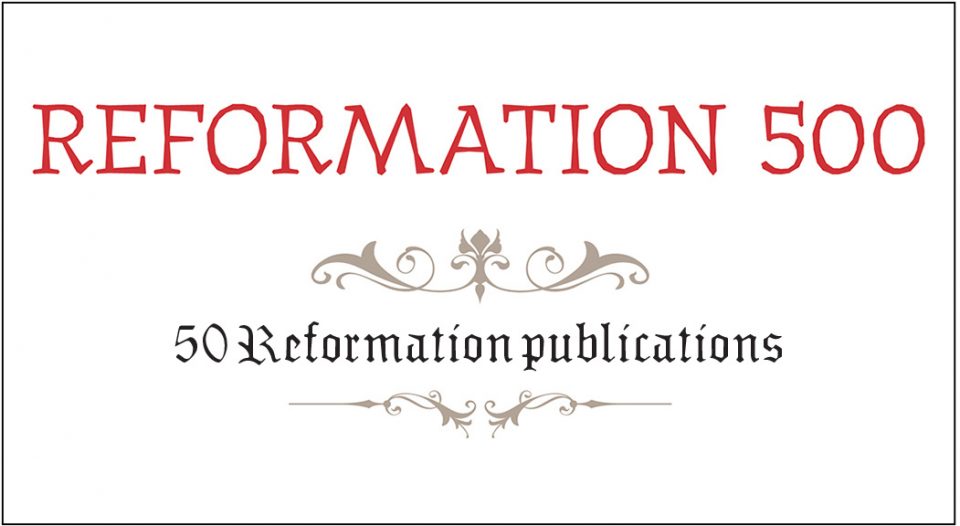 As we commemorate the 500th anniversary of the Reformation, Living Lutheran is exploring 500 of its unique aspects, continuing our series this month with 50 Reformation publications.

This list is not meant as an all-encompassing compendium of everything essential to the Reformation and its theology, but rather as a glimpse of the variety of ways the movement that Martin Luther sparked in 1517 would influence the history of the world.

Novum Instrumentum omne (Desiderius Erasmus, 1516)
The humanist scholar Erasmus’ critical edition of the New Testament texts in Greek was the basis for Martin Luther’s translation of those books into German.

95 Theses (Martin Luther, 1517)
Luther opposed the sale of indulgences, claiming instead that grace is a free gift from God. The posting of the 95 Theses on Oct. 31, 1517, is considered to mark the beginning of the Reformation.

On the Freedom of a Christian (Martin Luther, 1520)
Luther described two dimensions of Christian life: faith unites us with Christ and leads to loving service of our neighbors.

A Brief Instruction on What to Look for and Expect in the Gospels (Martin Luther, 1521)
Luther offered this advice to preachers: “The gospel itself is our guide and instructor in the Scriptures,” and Jesus Christ should be preached “as a gift, a present that God has given you and that is your own.”

Etlich Cristlich lider, or Achtliederbuch (1524)
The first Lutheran hymnal, containing eight hymns, four of which were written by Luther.

Small Catechism (Martin Luther, 1529)
Luther’s classic explanation of what the basic elements of the Christian faith really mean in the lives of Christians.

The Luther Bible (1534)
Luther and his colleagues translated the Bible from the original Hebrew and Greek into German, the language of the people.

The Augsburg Confession (1530)
The basic statement of the beliefs of the Lutheran reformers—written primarily by Philipp Melanchthon—still authoritative for the Lutheran church today.

The Book of Concord (1580)
The definitive collection of creeds and 16th-century faith statements of the Lutheran church.

Loci Communes, or Common Places in Theology (Philipp Melanchthon, 1521)
The first Protestant theology textbook. Luther said, “Next to Holy Scripture, there is no better book.”

Women and the Reformation (Kirsi Stjerna, 2008)
An important discussion of women’s roles and opportunities in the 16th century, as well as the lives of eight women who played significant roles in the Reformation.

Printing, Propaganda, and Martin Luther (Mark Edwards, 2004)
Edwards examines the Reformation as a media event made possible through the new technology of the movable-type printing press.

The Serpent and the Lamb: Cranach, Luther, and the Making of the Reformation (Steven Ozment, 2011)
Ozment highlights the work of artist Lucas Cranach the Elder, his friendship with Martin Luther and his influence on the Reformation.

Luther and the Hungry Poor: Gathered Fragments (Samuel Torvend, 2008)
Torvend focuses on Luther’s concern for the poor and his emphasis on social ministry as an essential part of congregational life.

Law and Protestantism: The Legal Teachings of the Lutheran Reformation (John Witte Jr., 2002)
An in-depth study of how the Reformation shaped civil society through the reform of social structures and of laws concerning marriage and education.

A History of Lutheranism (Eric W. Gritsch, second edition, 2010)
A history of the 16th-century Lutheran reform movement, the tensions between orthodoxy and pietism in the following centuries and the spread of Lutheranism to North America and other parts of the world.

Theology and the Black Experience: The Lutheran Heritage Interpreted by African and African-American Theologians (Albert Pero and Ambrose Moyo, editors, 1988)
Challenging essays from the first Conference of International Black Lutherans, held in Harare, Zimbabwe, in 1986.

October 31, 1517: Martin Luther and the Day that  Changed the World (Martin E. Marty, 2016)
Less a history than a reflection on how the Reformation theme of repentance shapes ecumenical relationships among Christians today.

The European Reformations (Carter Lindberg, second edition, 2009)
Lindberg looks at many different reform movements included under the broad heading of “the Reformation.” He includes a range of theological approaches, different geographical locations and the impact on various aspects of society.

Book of Harmony: Spirit and Service in the Lutheran Confessions (Martin Lohrmann, 2016)
A pastoral interpretation of the history and theology of the Lutheran confessional writings contained in the Book of Concord.

Together by Grace: Introducing the Lutherans (Kathryn Kleinhans, editor, 2016)
A brief introduction to Lutheran theology, history, worship and service, including stories from the global Lutheran family.

The Joint Declaration on the Doctrine  of Justification (The Lutheran World Federation and the Roman Catholic Church, 1999)
An ecumenical agreement articulating how far Lutherans and Catholics have come in reaching a shared understanding of the doctrine that divided them in the 16th century.

Luther the Reformer: The Story of the Man and His Career (James Kittelson and Hans Wiersma, second edition, 2016)
Kittelson’s biography has been a standard classroom text in colleges and seminaries since the first edition was published in 1986.

Martin Luther: Visionary Reformer (Scott Hendrix, 2015)
A balanced treatment of Luther’s early and later life, drawing on the most recent scholarship. It offers a theologically informed history, accessible to the non-specialist.

Resilient Reformer: The Life and Thought of Martin Luther (Timothy Lull and Derek Nelson, 2015)
Another well-researched new biography, with a focus on how Luther’s personal resilience allowed him to respond to the many challenges and opportunities of the Reformation both energetically and constructively.

Katherine von Bora: Luther’s Wife (Martin Treu, English edition, 2003)
A thoroughly researched biography of the woman who became Martin Luther’s wife. Available in Germany. (Most English-language books about von Bora rely heavily on historical fiction to fill in the gaps of her life.)

Argula von Grumbach: A Woman Before Her Time (Peter Matheson, 2013)
A biography of the first female writer of the Reformation, who defended Lutheran teachings in the face of personal and public opposition.

William Tyndale: A Biography (David Daniell, 2001)
An account of the man who first translated the Bible from the original Greek and Hebrew into English—and was burnt at the stake as a heretic for doing so.

Thomas Cranmer: A Life (Diarmaid MacCulloch, 2017)
A new biography of the first Anglican archbishop of Canterbury, who composed The Book of Common Prayer, guided the reformation within the Church of England, and was executed when Henry VIII’s Catholic daughter, Queen Mary, tried to reintroduce Catholicism to England.

John Calvin: A Pilgrim’s Life (Herman Selderhuis, 2009)
An engaging biography of John Calvin, founder of the Reformed tradition, providing insight not only into his theological accomplishments but on his life as a person of faith.

A Reformation Reader (Denis R. Janz, 1999)
A collection of primary texts from the Late Middle Ages, Luther, Zwingli, the Radical Reformation, Calvin, the English Reformation and the Catholic Reformation (sometimes called the Counter-Reformation).

The Annotated Luther, Volume 1: Roots of Reform (Timothy Wengert, editor, 2015)
A collection of a dozen early (1517-1520) Luther texts of various genres (academic theses, sermons, letters and treatises), with helpful historical and theological commentary. The other five volumes in this series are also more than worth exploring.

Church Mother: The Writings of a Protestant Reformer in Sixteenth-Century Germany (Katharina Schütz Zell, edited and translated by Elsie McKee, 2006)
Zell, the wife of a pastor in Strasbourg, was a theologian, an ecumenist and a reformer in her own right.  This volume collects her writings with a helpful biographical introduction by historian McKee.

The Book of Common Prayer (Thomas Cranmer, 1549)
Composed by Archbishop of Canterbury Thomas Cranmer and initially published for the worship life of the Church of England. Revised periodically and adapted for different cultures, this remains the standard worship book throughout the Anglican Communion.

The Institutes of the Christian Religion (John Calvin, 1536)
A comprehensive statement of the theology of the Reformed branch of the Reformation. Other editions appeared in 1541, 1559 and 1560.

The Spiritual Exercises (Ignatius of Loyola, 1522-1524)
A series of meditations and prayers written by the Spanish priest who founded the Jesuits. Intended to help Christians discern the will of God in their lives, it is still widely used in retreat settings and for personal devotions by Catholics and other Christians.

Protestants: The Birth of a Revolution (Steven Ozment, 1993)
Ozment explores the ways in which the Reformation shaped—and was shaped by—everyday men and women.

The Anabaptist Story (William Estep, third edition, 1996)
A history of the Reformation movement that rejected infant baptism in favor of believer’s baptism.  Anabaptists were widely persecuted by other Christians, both Protestant and Catholic, in the 16th century.

Trent: What Happened at the Council (John O’Malley, 2013)
O’Malley explores the history, theology and politics of the Catholic Church’s formal response to the challenges of the Reformation.

Atlas of the European Reformations (Tim Dowley, 2015)
This Reformation atlas includes maps, timelines and brief explanations of key themes from 1300 to 1700.