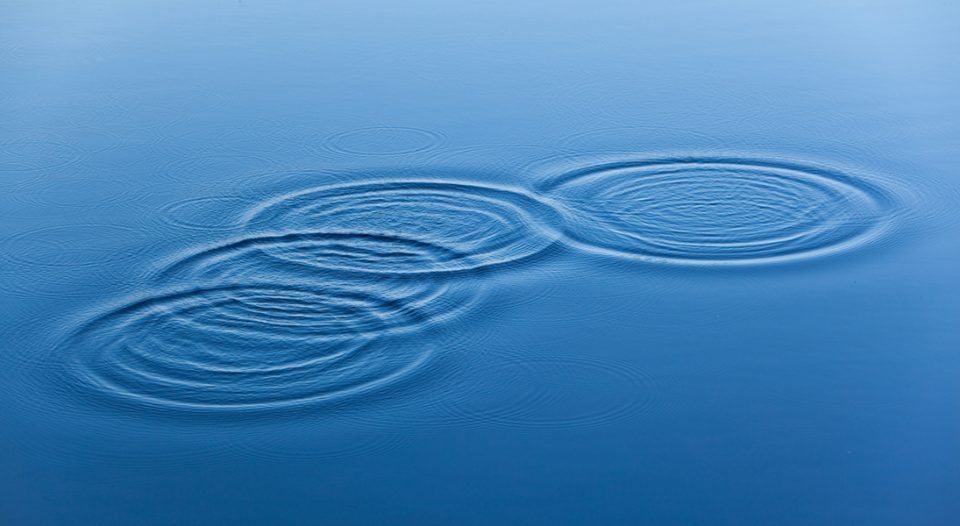 Recently, our regular babysitter had to cancel because her son got sick, so we had to find another sitter at the last moment. After quickly changing our plans, I started to think about the ripple effect. One person’s actions have a ripple effect on so many people. Consider this pattern:

The progression also goes backward. I have no idea why our sitter’s son got sick, but maybe he picked up a bug from someone else. So, hypothetically, it could have gone like this:

So, hypothetically, some dad had to go to a meeting and that prevented our new babysitter from finishing a project she had planned. That’s just one example—and I’m not even certain about some of it.

I’m sure you have felt the ripple effect in your life too. You know that the actions of other people influence your life, and that your actions influence the lives of others. Some things that affect us are beyond our control—like when someone gets sick and then they can’t help you. However, some things are within your control—like how you respond to this new situation.

I’m sure you have felt the ripple effect in your life too.

Of course, the ripple effect has history too:

So, Jesus loves us, and that love rippled out through many people’s lives into our own lives today. It rippled out with the promise of the good news that is for all people in all times. Those ripples flowed throughout the ages and around the world. That is a potent ripple effect.

Jesus loves us, and that love rippled out through many people’s lives into our own lives today.

Your reach extends far beyond what’s right around you. Because of that, I pray that your influence is empowered by the Holy Spirit—just like at that Pentecost way back when. You can share the love of Jesus with someone—and it will change their life and the lives of those they touch. What powerful ripples!

Winds of change, fire of passion

Why did Jesus die?

Everything belongs to God