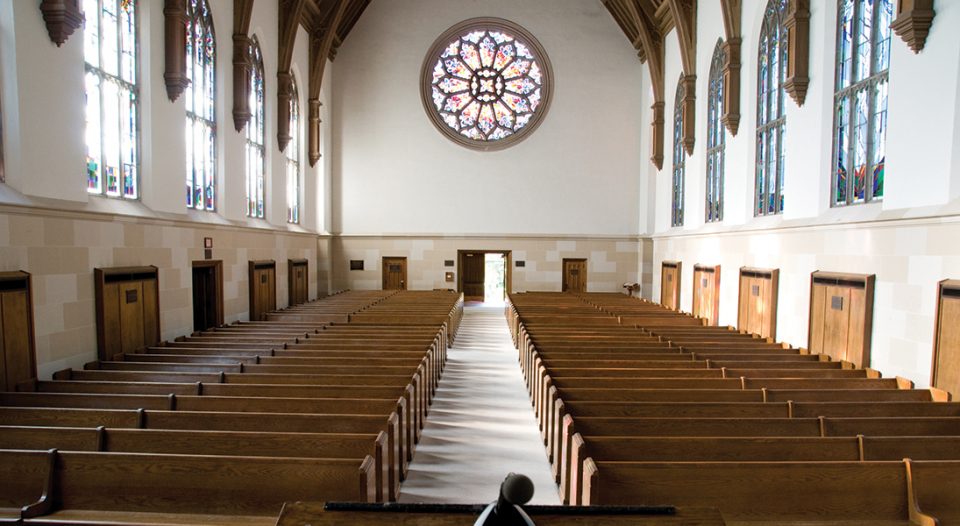 The numerical decline of most Christian denominations in the U.S., and the growth of so-called “nones” who don’t claim any religious faith, isn’t news to most rostered ministers or people in the pews. Many beloved congregations have shrunk or closed. Statistically speaking, younger generations feel less and less connected to the church. Are we facing a “post-Christian” future?

How should Lutherans read reports like this one—as an alarm bell or a wake-up call? What do trends teach us about the challenges and opportunities of being the church today?

It’s important to read surveys carefully, not only to respond to the conclusions but also to notice which questions are being asked. Through interviews, the Barna study determined “post-Christian” identity by judging responses according to 16 points of Christian belief and practice.

Some points, such as “do not believe in God” and “disagree that faith is important in their lives,” seem clear-cut. Other criteria, like “have never made a commitment to Jesus,” “not born again” and “disagree that the Bible is accurate,” define Christianity primarily through the lens of religious conservatives rather than from Lutheran and other traditions. The latter might answer “we are Christians because Christ makes a commitment to us in our baptisms”; might not have had an adult conversion (“born-again”) experience; and might describe the Bible as theologically accurate but not literally inerrant.

Interviewees were also assessed on whether they had prayed, read the Bible, volunteered at church, attended Sunday school or joined a religious small group in the last week—criteria that might exclude those who participate regularly, but not weekly, in these activities. Does a week’s lapse in Christian practice, or a difference in theological understanding of baptism or the Bible, make someone “post-Christian”?

The report also doesn’t indicate whether members of non-Christian faiths were part of the sample. These participants would likely answer “no” to most of the 16 criteria. It’s no doubt accurate to say these American neighbors aren’t Christian, but it makes very little sense to call them “post-Christian.” It’s also problematic to call any entire American city “post-Christian” (or, for that matter, “Christian”) when in fact, religious diversity has always been a reality of American life.

Still, one thing is clear: Christian faith in the U.S. can no longer be taken for granted (if it ever could). What the numbers and labels don’t address are the deeper questions of why people left the church, or how they find their identity and purpose in a “post-Christian” culture. What can the church learn from listening to the stories behind the statistics?

Christian faith in the U.S. can no longer be taken for granted. What the numbers and labels don’t address are the deeper questions of why people left the church, or how they find their identity and purpose in a “post-Christian” culture. What can the church learn from listening to the stories behind the statistics?

Erik Gronberg, bishop of the Northern Texas-Northern Louisiana Synod, cautioned against making sweeping generalizations about the culture of his region’s communities. “Is it a ‘churched’ culture in the sense of inviting clergy to pray over city events or hearing Christian radio? Yes. In terms of seeing the majority of people in worship every Sunday? No.”

Gronberg fears that a title like “most Christian city” might lead Lutherans elsewhere to assume there is no fruitful ministry to be done in these communities, but that isn’t the case. “If we believe there is value to the Lutheran Christian confessional witness to the gospel, can we share this in a way that goes beyond a certain worship style or culture?”

The bishop has found that a gospel of grace is still a much-needed message in highly culturally Christian areas. “We have a deep theology of welcome and inclusion by God: God loves you, period,” he said. “The message that God is actually for you and not against you can be a radical message.”

Living in a highly Christian but minority-Lutheran context can make Lutherans more purposeful about their identities. “In Shreveport you are Lutheran on purpose,” Gronberg observed.

Still, he added, “if Lutherans aren’t the dominant cultural voice … it encourages partnerships and offers the opportunity to be prophetic” on issues such as women’s leadership in ministry and welcome of LGBTQ+ people.

“The reality that people [here] are not connected to church [is true],” said Maria Anderson-Lippert, until recently the interim pastor of St. Ansgar Lutheran Church, Portland, and mission developer for Arise Portland, which serves mostly young queer adults. “Most of the people I meet maybe grew up going to church but left for a number of reasons … and I have met more people out here than ever before who didn’t grow up with any religion.”

Anne Roser, who served in New Hampshire for more than 15 years before becoming interim pastor of First Lutheran Church, Portland, finds that throughout New England “the issues are the same. We are in the second generation of people who haven’t been raised in the church.”

Arise Portland grew from Anderson-Lippert’s conviction that “it’s unrealistic to expect that people are just searching for a church,” but that at the same time, “there is a longing and searching for something deeper: meaningful relationships and asking big questions.”

Arise strives to meet these needs through a monthly “holy potluck,” a book club, and a “Pints and Perspectives” small-group conversation in a local pub. Using open language and inviting diverse perspectives helps “people who have been hurt by the church or who have never found a religion that made sense” to feel welcome, she explained.

Roser agreed: “We are called to spread the love of Christ and there are many ways to do that, not just ‘how we’ve always done it.’ It takes Christian imagination, understanding people in context and experimentation.”

Although most of the families who use First’s highly rated preschool and child care programs are not regular churchgoers, an “Ashes-to-Go” station on Ash Wednesday was a success. This led Roser to conclude that “people respond when the church responds to what they need—not just catering to them, but proclaiming grace where they are.”

Post-Christian or most Christian?

For at least some Lutherans in Shreveport and Portland—and for many of the rest of us too—being Lutheran in North America today means living among neighbors who may not share our traditions, faith language or understanding of the world. This reality can be challenging, but doesn’t have to be discouraging.

For Roser, the inability of the church to keep doing “what we’ve always done” can spur the church to become “a place of safety and welcome, and love—a public place.” In a post-Christian world, she said, the heart of Christian faith can be rediscovered in the question: “How do we proclaim who Jesus is for people, this message that is good news for them and gives them hope?”

Why empty-nesters are leaving the church

Is America facing a "post-Christian" future?
Data from pollsters and sociologists agree that the church occupies a smaller, less-prominent place in our culture than it did even a generation ago. Some are even using the term “post-Christian” to describe our current situation. What does that mean for Lutherans, and how can we respond positively?
Download Now