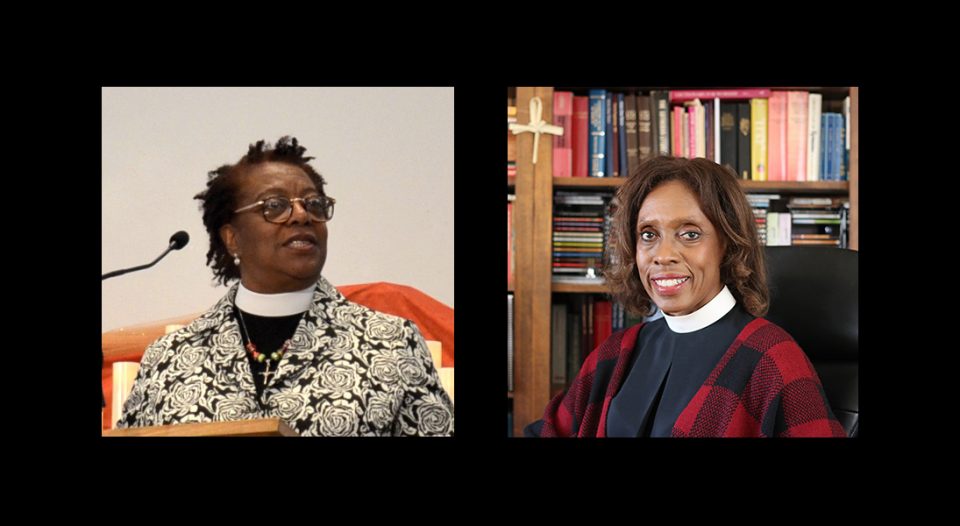 Patricia Davenport (left) and Viviane Thomas-Breitfeld were elected as ELCA synod bishops May 5 and 6, respectively.

Last weekend, following her election as the ELCA’s first female African-descent synod bishop, Patricia Davenport was reminded of a hymn her congregation sings, “For Everyone Born” by Shirley Erena Murray. “For everyone born, a place at the table,” go the lyrics. “And God will delight when we are creators of justice and joy, compassion and peace.”

“I am delighted that is no longer for me just a song that we sing,” Davenport said, “but a movement.”

Davenport was elected May 5 to serve a six-year term as bishop of the Southeastern Pennsylvania Synod. She succeeds Claire S. Burkat, who has served as synod bishop since 2006 and will retire July 31.

A member of the Spirit & Truth Worship Center in Yeardon, Pa., Davenport currently serves as director for evangelical mission and assistant to the bishop for the synod. She will be installed Sept. 22.

Thomas-Breitfeld was elected May 6 to serve a six-year term as bishop of the South-Central Synod of Wisconsin. She succeeds Mary Stumme Froiland, who has served as synod bishop since 2013 and will retire June 30.

Thomas-Breitfeld currently serves as interim pastor of St. Paul Lutheran Church in Beloit, Wis. She will be installed Aug. 18.

Both bishops-elect are lifelong Lutherans. Davenport was raised in a predominately German congregation, and Thomas-Breitfeld grew up in the Augustana Evangelical Lutheran Church, a majority-Scandinavian denomination—“Don’t I look Swedish?” Thomas-Breitfeld joked—that merged into the Lutheran Church in America, an ELCA predecessor body.

“Because it was a predominately German church where English was not the primary language spoken, of course there were no people in leadership who looked like me,” Davenport said of her childhood congregation. “So to be able to take those steps on this journey and get to a place where I’ve been elected bishop to serve is just mind-boggling. I know it’s the work of the Holy Spirit.”

Thomas-Breitfeld agreed: “To someone who’s been in the church for all of my life and to a pastor who has seen nonacceptance based on gender and race, [my election] was gratifying.”

“For those who have not found their place at the table, we get to say, ‘Look, see, there is room at the table for you.’ ”

Each also agreed that their elections signaled a meaningful affirmation by their synods of the leadership gifts they can offer the church. “I came into the church during an era of ‘You’re welcome to come, but leave your baggage and all of your gifts, all the things you bring, at the door,’ ” Davenport said. “So this [election] says to me, ‘You have gifts, bring them, share them with all.’ ”

Synod members saw the bishops-elect not through a lens of focusing on differences, but “as baptized people of God, looking at the gifts that people bring, and voting based on that,” Thomas-Breitfeld said.

“A tidal wave of hope”

Some of the most meaningful moments for Davenport and Thomas-Breitfeld in the wake of their elections have been hearing from members, young and old, across the church (and other denominations) about what the actions have meant to them.

The bishops-elect reported hearing from not only elders of color in the church—saying, “I’m grateful that I lived long enough to see this happen,” or “I couldn’t sleep last night”—but also encouraged young seminarians, who have told them, “I’m going to stay here [in the ELCA]. I’m going to continue to press forward.”

“Probably the thing that has been most gratifying and most humbling is hearing from my sister-pastors and sisters who are in the call process who have been so emotional about this,” Thomas-Breitfeld said. “It gives them a sign of hope. That as they watch me, they can celebrate and say, ‘Maybe that can be me, too, one of these days. Maybe things are changing.’ ”

For Angela Khabeb, a pastor of Ascension Lutheran Church in Waukesha, Wis., the elections felt like “a tidal wave of hope.” Upon hearing of Davenport’s election, Khabeb said she was “giddy with excitement. I felt powerful and strong.” Later, when she saw that Thomas-Breitfeld—who had attended Khabeb’s ordination—had been elected, she began to weep.

“This is the equivalent of Neil Armstrong landing on the moon,” Khabeb said. “I’ll never forget where I was when I found out.”

Both bishops-elect expressed hope that their new roles would encourage and challenge ELCA members to live out their baptismal call to strive for justice.

“God loves each of us. If we remember that, then we know how we need to respond to one another,” Thomas-Breitfeld said. In the face of categorizations such as race and gender that the world deems important, she said, what truly matters is remembering that “we are named and claimed by God. If God claims us, then we need to claim each other.”

Davenport echoed that sentiment. For her, the elections signify a tangible path forward for intentional inclusion. “For those who have not found their place at the table, we get to say, ‘Look, see, there is room at the table for you,’ ” she said. “This is not the end, this is the beginning.”