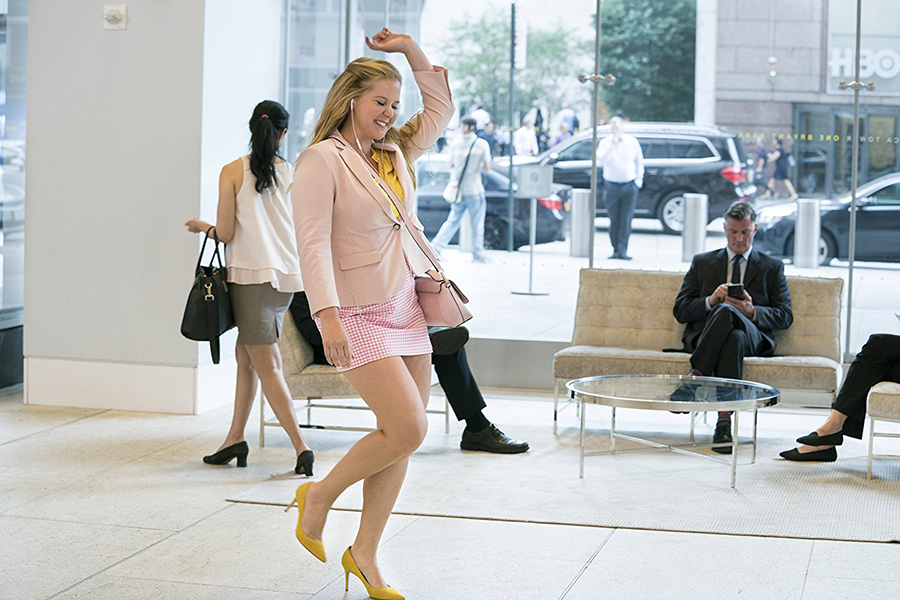 At first, I was a little concerned about comedian Amy Schumer’s new movie, I Feel Pretty, largely because I felt the controversial premise could go either way. Schumer plays Renee, who isn’t happy with her physical body. She’s feeling stuck in her life, doesn’t like her job, would like to be dating and constantly (and unfavorably) compares herself to women around her. She wonders aloud what it would be like to have the opportunity to be “undeniably pretty.”

A head injury gives her that chance, sort of. Renee awakens, looks in the mirror and sees a totally different person—her ideal self. She is thrilled.

I don’t love the assumption that women (and men) who don’t fit into society’s unrealistic standards of beauty and desirability are unhappy with themselves and their bodies. Still, I know that some are and that this is a single story. Whatever else it might be, writer-directors Abby Kohn and Marc Silverstein’s film is not a manifesto for those who are unsatisfied with something about themselves.

For me, I Feel Pretty got interesting when I began to watch Renee’s transformation. She had spent so much time worrying about how others perceived her, assuming that she wasn’t good enough for the roles and relationships she had hoped for. She didn’t act as if what she wanted was even a possibility.

After she hits her head, Renee experiences joy, but also freedom. She’s suddenly not worried about not being enough anymore. She assumes she’s enough. This changes everything. All at once, she’s going after that job she wants; she’s talking to the cute guy at the dry cleaner and giving him her number; and she’s walking right up to the bar and ordering a round of drinks for her friends, not worrying that the bartender will ignore her and serve someone they find more attractive.

In a very real way, by removing her insecurity about her appearance, Renee is free to stop worrying about her looks and simply live.

People in her life respond. She achieves professional success and her love life blossoms. She also makes some bad choices, choosing some of the glitter of her new life over her friends. But for the first time, maybe ever, she’s living unselfconsciously.

I found myself asking: What if I lived like I was already accepted, already approved? What if I was living into the knowledge that I am truly beloved?

Last month, I wrote about the gifts Brené Brown’s new book, Braving the Wilderness, has to offer. I Feel Pretty reminds me of a quote from the book that I’ve tried to imprint on my heart: “Stop scouring people’s faces for evidence that you’re not enough. … The truth about who we are lives in our hearts. Our call to courage is to protect our wild heart against constant evaluation, especially our own. No one belongs here more than you.”

Watching the movie, I found myself asking: What if I lived like I was already accepted, already approved? What if I was living into the knowledge that I am truly beloved? I do that sometimes. But more often than not, I’m scouring people’s faces for signs that I’m not enough, just like Renee did.

As people of God, and especially as Lutherans, we talk a lot about the importance of grace. Our salvation and worth aren’t tied to anything we do. Sometimes, though, it’s easy to forget about that, and we end up trying really hard, just in case grace’s check bounces.

How many of us are confident enough in how much we are loved and accepted by God that we follow Martin Luther’s call to “be a sinner and sin boldly, but believe and rejoice in Christ even more boldly. For he is victorious over sin, death, and the world”? I’m usually less bold about both the sins and the good works than I’d like to be. Not only that, I’m often restrained in my rejoicing—both in God and in who God made me to be.

What would our lives look like if we were truly secure in the knowledge that nothing can separate us from God’s love? What would it look like if we believed, deep in our bones, that God formed us with joy and intention, knowing everything about who we would be and what we would do?

I think it would look like a burden lifted, a beautiful dream become reality.

Unlike Schumer’s character, we don’t have to experience a head injury to access these truths (although sometimes I’d like a kick-start). She was enough already, just as we are. But we might have to practice believing, choosing to walk in the reality that already exists.