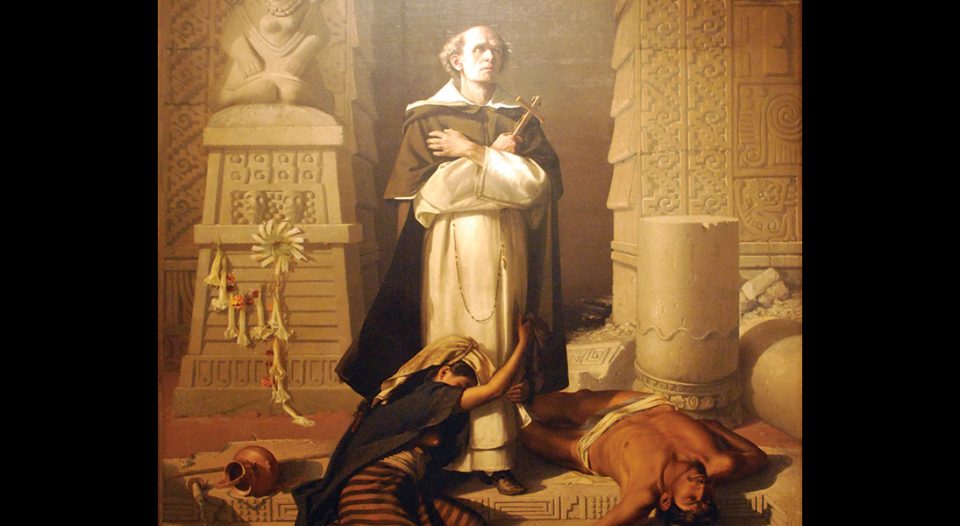 Bartolomé de las Casas (1484-1566) is a good example of what Lutherans call a “saint and sinner.” As an immigrant from Spain who came to Hispañola in 1502, Las Casas was a colonizer who owned slaves and participated in the military expeditions against the native people of the Caribbean. Denied absolution by a Dominican priest who protested the islanders’ mistreatment, he began to reflect on the ethical implications of his faith. Las Casas entered seminary and in 1510 became the first Dominican priest ordained in the Americas.

In this role, Las Casas led a crusade against the mistreatment of the native people by the colonists. After writing extensively on the subject, he helped enact the New Laws for colonial Spain that would protect the native people from mistreatment, defend their property rights and allow them to become subjects of the crown. The court of Spain officially named him the “Protector of the Indians.” He was appointed bishop of Chiapas, Mexico, in 1544, a position he held until 1550.

Las Casas’ life and ministry in defense of the human rights of native people reflects the philosophical, theological and anthropological questions of his era. The question of whether the “Indians” had a rational soul, could govern themselves and be evangelized was up for debate. The answer to these questions would determine how the church would proceed with evangelism and whether just wars could be waged against the native people.

Las Casas argued that native people had the capacity for reason, a qualifier for being human, and thus could govern themselves and be evangelized. His opponents thought other­wise, in large part due to the enormous economic gain they provided as free labor. In 1550, Las Casas debated these questions in a disputation before Spanish theologians at the University of Valladolid. He was among the first theologians to argue in defense of the native people and is considered a forerunner of human rights theory. In a historical irony, he argued that colonists use their African slaves for labor, a position he later retracted after seeing the dehumanization of the slave markets. Whether he  is the originator of the slave trade is a question for historians to elucidate.

What is evident from the historical record is that native people were the object of genocide and enforced labor. Since their spiritual and intellectual capacity was disputed, the defense of their humanity rested on the question of their participation in the divine Logos, the Greek concept for rational being that we translate as the “word,” or verbo, in Christian theology. Las Casas argued that they were indeed endowed with the intellectual capacity to receive the word and thus become a people of faith with proper catechesis. His defense of their humanity meant a defense of their human dignity, a concept that theologians trace to the imago Dei, the image of God notion of the Judeo-Christian tradition.

Thus, to be created in the image and likeness of God (Genesis 1:26-27) meant that all native people have an inherent dignity endowed by their Creator, which no enforced labor ideology or slave-trafficking system could defy or refute. This theological framework formed, in part, the basis for his justice demand and defense of the original inhabitants of the Americas.

For Las Casas, the proclamation of the gospel was the sole reason for which Europeans might legitimately find themselves in the Indies. He expressed this concern in the significance that he gave for learning the language of the native inhabitants. In The Only Way (De unico vocationis), he argued for evangelization by peaceful charity and respect, not by “fire and the sword.” He recommended that bishops appointed to the Indies learn the native languages with all diligence, for language is an element of culture and culture is life! This is a vital lesson that the church is still learning and an imperative and directive for evangelical mission, gracias a Bartolomé de las Casas!