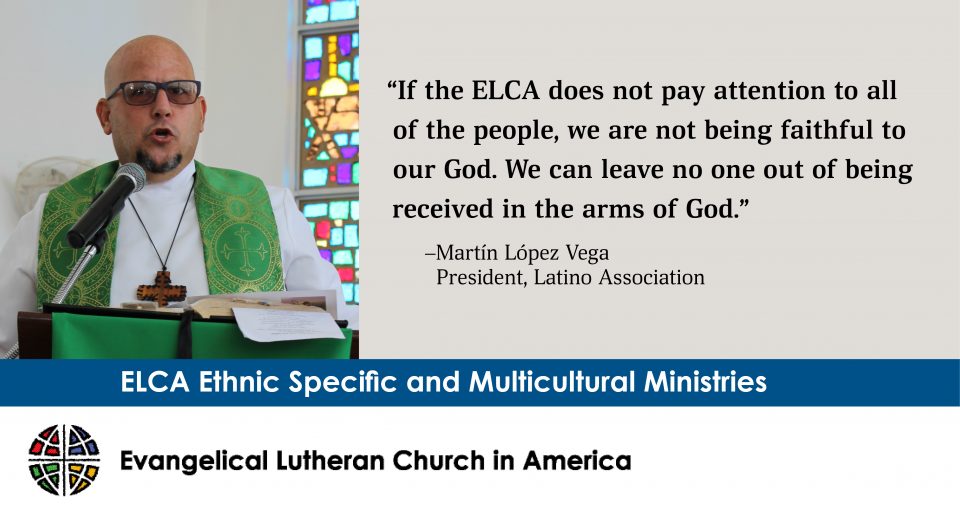 Martín López Vega, president of the ELCA’s Latino Association, is committed to being a voice for victims of injustice and the marginalized. He’s also focused on nurturing a multicultural and welcoming ELCA that values, recognizes and benefits from the contributions of diverse Latino Lutherans and other ethnic groups.

Silence in the face of injustice is not an option, he contends. That view is what drove Vega to speak out against the Trump administration’s “zero tolerance” immigration policy that separated more than 2,000 children from their parents as they crossed into the U.S. from Mexico, often fleeing violence in Central America. The Latino Association released statements on the topic to raise awareness and encourage advocacy, he said.

“We cannot be with our mouths closed,” said Vega, who serves Iglesia Evangelica Luterana Getsemaní in Dorado, Puerto Rico. “We’ve got to open them and denounce this.”

Vega, who became the association president three years ago, said the group is working to build new Latino chapters. It recently launched one in Chicago to assist newly arrived Latinos and long-established immigrants who still face challenges. “We want to reach them and give them the tools they need, to share with them, walk the path with them,” he said.

“I want others to know that the ELCA is not only a white church, not only for Latino people—it is a church that is multicultural and open to receiving any person.”

The Latino Association has plans to launch three more chapters in three years. It currently includes nearly 200 Latino ministries and chapters in the U.S., including Puerto Rico, Vega said.

The association has focused on building a social media presence and is revamping its website, which currently displays information in Spanish. Plans call for adding an English-language link to the site to target Latinos and others for whom English is their first language.

“I want others to know that the ELCA is not only a white church, not only for Latino people—it is a church that is multicultural and open to receiving any person,” Vega said.

With expectations that the Latino population in the U.S. will double by 2050, the Latino Association is important to the ELCA’s present and future, as are all of its ethnic ministries and associations, he said.

“We can leave no one out of being received in the arms of God.”

Seeing Jesus in the face of the other