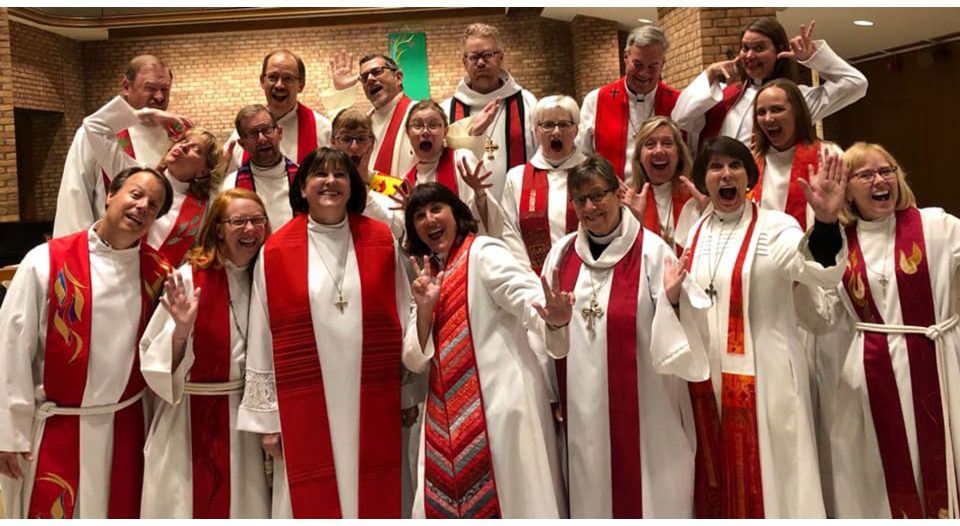 A group photo from the ordination service writer Angela Denker participated in.

On a Tuesday night at the end of summer, I participated in an ordination.

Ordination, the act of consecrating someone as a member of the religious clergy, is sort of an antiquated ritual that’s probably most familiar to Americans when it comes to the Roman Catholic Church.

Church after church, including where I served my first call as a Lutheran pastor, has been torn apart by clergy misconduct, be it sexual, financial or simply born of overwork and burnout. The church, we seem to read in the news at least once a week, is dying.

Why in the world would anyone get ordained today?

Still, on that Tuesday night, I put on my long white robe and red stole and walked into a congregation for an ordination. Although the weekend before had marked five years of my own ordination, I felt out of place, wearing my costume and processing in silently behind a large wooden cross to organ music. I had lately wondered what it all meant—if anything at all. I’m not one for religious pageantry. I sometimes felt about ordination the way I did about church youth group—I wasn’t good enough, pure enough. I felt more comfortable on the outside. This in-group of pastors, with their rituals, tradition, confidence and comfort in a sacred role, could create the worst kind of imposter syndrome.

Lately, as I navigated full-time motherhood, marriage and writing, and part-time pastoral ministry, I wondered if it wasn’t time to just put an end to the ritual. I’d traveled the country interviewing Christians and pastors, and while there was so much to hope for, there was also so much fatigue, so much compromise, so much time spent on all the wrong things, and these ministers of the gospel were, in many cases, weighed down by the world more than they were lifted up by the Spirit.

Jesus concludes a section of his lengthiest sermon, the Sermon on the Mount, in this way: “Be perfect, therefore, as your Heavenly Father is perfect.”

It seemed too tall a task. But there I was, dressed for the ordination, sitting in the pew.

As surely as death surrounds the old American church, so does new life.

I met Heather, the ordinand, in June 2017, a few weeks after moving back to Minnesota. I was taking my son Jacob to vacation Bible school at the church nearest our home. Heather was so welcoming, whisking Jacob away into worship with guitars and those familiar old camp songs, and he was just absolutely belting it out.

Watching my son feel so at home here, hearing those familiar songs, feeling the dearth of my pastoral ministry in that moment, I felt my face getting hot, tears starting to well up. Heather hugged me anyway. Later, we’d tell each other our ministry stories—hers as a former missionary and children’s ministry guru now serving out a three-year pastoral internship in a long-awaited seminary graduation and ordination.

Now she was standing in front of the church. Ordinations can be somber, full of mysterious ritual and unfamiliar phrases, but Heather wasn’t going to have that. Instead, several children came forward to read Bible lessons, say prayers, and to lead the congregation in a Bible-focused “Hokey Pokey.” They looked up at Heather like she was their personal superhero. She made it so fun, easy and comfortable to say and feel with their hearts that God loved them. She gave them permission to lead as they were able, and she trusted them enough to hand over her ministry to them, even at this most important moment.

Later the bishop came to preside over the service, and we laid hands on Heather, as they once did for the apostles. She received her own red stole, and we took photos afterward, members together of an imperfect, outdated, morally flawed religious sisterhood and brotherhood.

Maybe like me you wonder why anyone would get ordained today. Why would anyone want to dedicate their life to a seemingly corrupt and morally compromised institution like the American church? Why would you purposefully commit your life to something that appears to be dying?

I’m still figuring out my answer to that question. But I saw in Heather and at her ordination service that the answer is in Jesus and his death and resurrection. As surely as death surrounds the old American church, so does new life. Most of us there in our white robes were women. Women who, at one time, hadn’t been allowed to wear these robes and say these vows. I noticed in their eyes not resignation but hopefulness.

Just as Jesus promised there would be new life even out of ugly, painful death, so, too, does he promise that new life is afoot in the church. It’s for this new life, the new life promised by the children who led us in song and prayer, that Heather was ordained. Because of her reminder, I will wear my ordination proudly as well—an homage not to the past but to the promise of God’s future.