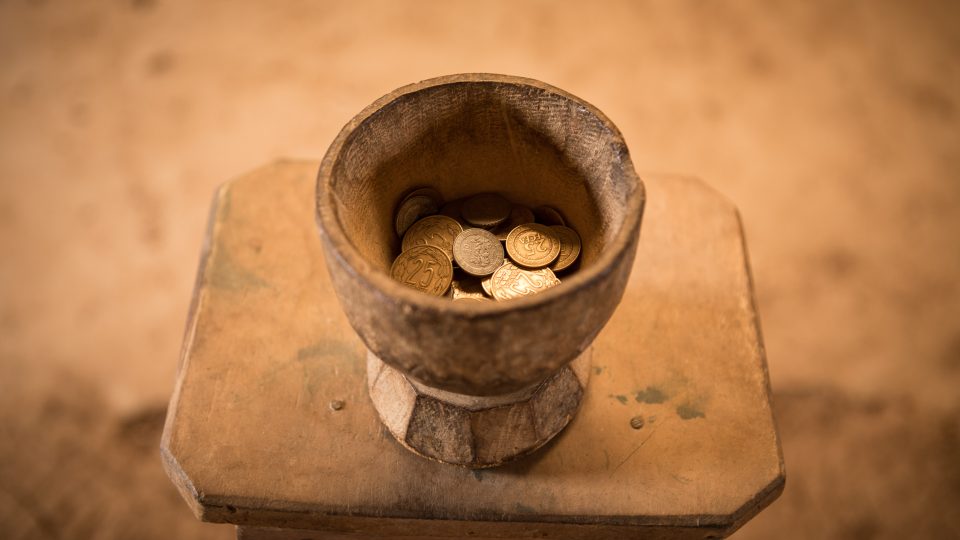 With the arrival of autumn, many ELCA congregations enter a new season of stewardship. But finding new ways to foster giving can be a challenge for congregants and pastors. In examining my own stewardship, I found inspiration from an old story, which helped me see generosity in a new light.

The story of the widow’s mite is often held up as an example of great generosity. Yet a closer examination of the words makes me think more about the tactile element of her gift and the act of giving it: He looked up and saw rich people putting their gifts into the treasury; he also saw a poor widow put in two small copper coins. He said, “Truly I tell you, this poor widow has put in more than all of them; for all of them have contributed out of their abundance, but she out of her poverty has put in all she had to live on” (Luke 21:1-4).

Within the text, Jesus is the only person who sees the widow. No one else notices this woman, who is probably dressed in rough clothes, or sees her giving those two coins. I can only imagine there was silence as Jesus pointed her out to his followers, who were maybe too busy trying to get attention for their own giving and actions. The widow’s faith and generosity stood out in its simplicity as an example.

When my church instituted its own widow’s mite offering, leaders simply asked congregants to give their pocket change or extra bills—an offering above and beyond any normal giving by pledge or monthly gifts. Adding to the full experience of giving, every giver had to come forward and place the money on the altar.

For the first offering, I sat in the pew and dug coins out of my purse. They felt oddly foreign in my hand. I felt guilty there wasn’t more—it was maybe a dollar in total. Unlike the widow, this was nowhere near my “complete livelihood.” I wouldn’t miss those coins. Then I thought more about how the widow must have felt. Those coins were basically her entire paycheck. She didn’t stop to think about even the basic needs of her life.

I went into the next widow’s mite offering with coins that weren’t just leftover from the bottom of my purse. I wanted to have the feeling that my giving could be transmuted into something more—more than money.

The experience helped me understand that generosity isn’t just about stewarding our money. Martin Luther wrote: If you are rich and see your neighbor is poor, serve him with your possessions.

With the widow’s mite offering fresh in my mind, the next time I made Goodwill donations I was careful to choose items that would help others—not just cast-offs. When I volunteered at our school’s clothing drive, I imagined each donation keeping a child warm or a new pair of shoes helping them walk. Again, I found myself caught up in the weight of giving.

You see, one of our local donation centers weighs donations and gives gift cards to my church based on weight. I carefully measured out and weighed the donation. It was staggering to see it totaled only 30 pounds, which translated to less than $50 in store gift cards. That direct tangible relationship of giving had a larger impact. Not only was I giving at a certain, very defined weight, I now knew that 30 pounds of stuff had been weighing me down.

At the next widow’s mite offering, I was much more present. I better understood the weight of those two coins in the widow’s hand. Again, I laid my coins at the altar. This time I felt the very weight of giving.

Amy Barnes
Amy Barnes is a freelance writer who has been published by a range of sites including Parabola, The New Southern Fugitives, McSweeney's, Romper and Simplemost.