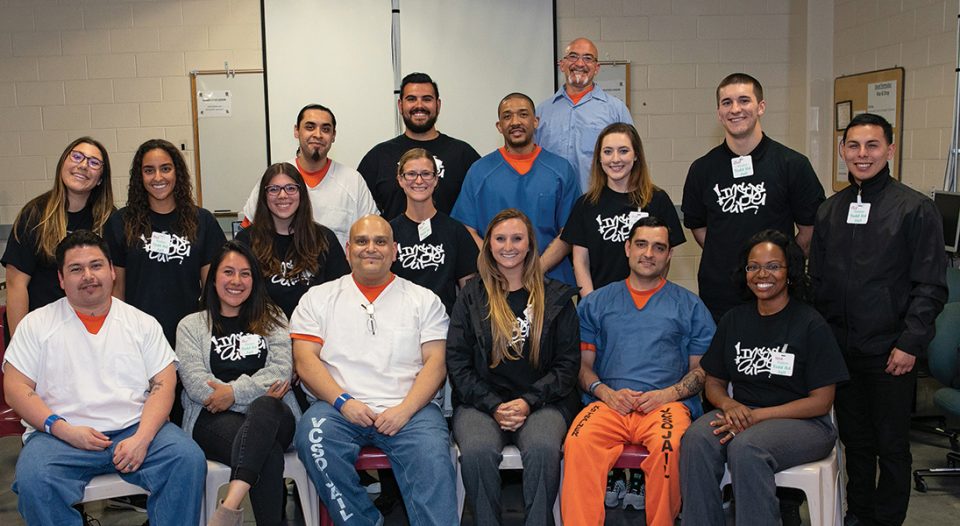 Students from California Lutheran University, Thousand Oaks, and inmates at the Todd Road Ventura County Jail are classmates through the Inside Out Prison Exchange, where college students go to a jail or prison to have class with incarcerated individuals. Credit: Brian Stethem

Victoria Rose Meek has a hard time choosing only one moment for when she realized how much of an impact the Inside Out Prison Exchange Program had on her, her California Lutheran University (Thousand Oaks) classmates or the students serving time at the Todd Road Ventura County Jail.

Perhaps the moment she remembers most vividly started when an inmate admitted he signed up for the university course because he had nothing better to do.

“By the end he [was] literally thanking each one of us because he said that after that class, he decided that when he gets out he wants to go back to school,” Meek recalled. “And he was one of three or four who said they plan to go and finish their degree and get off on a better foot when they get out this time, because many have been in more than once.”

Research is clear that education is one of the major factors in decreasing the rate of recidivism. And it’s a factor—though not the only one—that motivated the Inside Out Prison Exchange Program’s creation 21 years ago in Pennsylvania. The program brings together college (outside) students and incarcerated (inside) students for a course inside a prison, jail or correctional facility, and it has reached more than 30,000 students worldwide.

But it wasn’t until Schannae Lucas spent two years planning, researching and training that the program became part of California Lutheran. The associate professor of criminology and criminal justice first heard about Inside Out five years ago at a conference where a panel discussed an “amazing class” they had taken. “On that panel were incarcerated and formerly incarcerated students,” she said. “And I thought, this is interesting.”

That experience eventually led her to a training with incarcerated students, where she learned that the style of teaching needed for success stresses small- and large-group interaction over longer lectures.

From that point, it took a couple of years to work with the university and Todd Road to make sure everyone was on the same page.

During much of that time, Meek, who had Lucas as a professor, knew she wanted to be part of the first California Lutheran course taught inside the jail. After taking three of Lucas’ classes and expressing an interest, Meek was named a Culver Research Fellow, which allowed her to work on the course in a formal manner.

Part of what Meek said excited her about the program stemmed from being a home-schooled student, where emphasis was placed on real world experiences.

“I wanted to do this because it’s an opportunity for students to actually hear from the inmates and to break down the barriers and misconceptions about the way society looks at jails and inmates,” she said. “Most people think, oh, lock them up and that solves the problem, when really all that happens is they end up coming back into society. And if they’re not receiving the proper rehabilitation while they’re in the jail setting, they’re not coming back and contributing more to the community.”

Despite her enthusiasm, Meek admitted she had some preconceived thoughts about the inmates and that she was a bit nervous before entering the jail.

“I thought they weren’t going to be as excited about learning as we were,” Meek said. “Also, I had this thought that once a criminal, always a criminal—that you can’t change. Really, that’s the whole idea of the course. It changed my entire idea of the criminal justice system and its ability to rehabilitate. It’s also a humanizing experience.”

On the first day of class, Lucas had the students pick a word for how they felt about the experience at the beginning of class. Hopeful and a bit fearful were how several people started.

The program’s history has shown it’s safe, but Lucas said students are still entering a jail or prison where lockdowns or other situations can happen.

While Lucas teaches criminal justice, she wants students and professors to know that the program is open to virtually any subject. She’s working on a program for professors to conduct workshops in the jail, and she hopes some will get the full course training she received from Inside Out.

Lucas created a memory book about the course experience, which includes quotes from both inside and outside students. Miguel (last name withheld), an inside student, wrote: “It has been the most positive, impactful thing I have ever done in my life. I truly enjoyed making a change for the positive in the outsiders’ minds about inmates. We are people, just like them, who have made mistakes but should be given the chance to right our wrongs.”

Leanne Neilson, provost of California Lutheran, said the university is behind expanding the program and that two other professors have expressed interest. Neilson was at the last class of Lucas’ session, and she said the impact it had on everyone was clear.

“I knew it was going to be impactful, but to watch this guy, a lot older than our students, nearly break down and cry as he talked about what this did to his life, the depth of the emotion was just incredible to see,” she said.

One house, many religious expressions

California Lutheran and the business of water

Education for vocation: A look at the Network of ELCA Colleges and Universities

The road to redemption