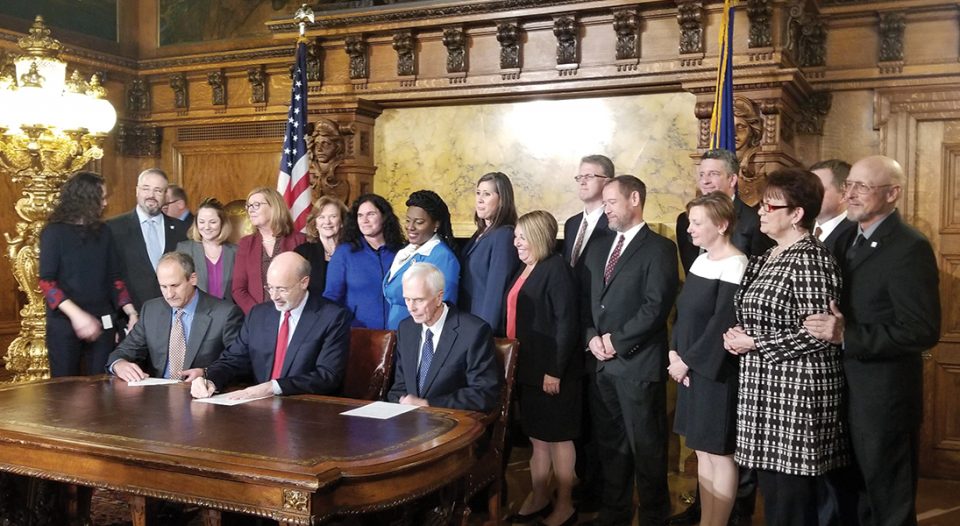 Since 2007, more than 40,000 cases of human trafficking in the United States have been reported to the National Human Trafficking Hotline, and it has received more than 125,00 signals about potential trafficking hot spots. In 2018 alone, more than 5,000 cases were reported and 14,000 signals were received.

For the last several years, Lutheran Advocacy Ministry in Pennsylvania (LAMPa), a state public policy office of ELCA Advocacy, has worked with a coalition to advocate for legislation to protect victims of child sex trafficking. This “Safe Harbor” legislation provides funding for rehabilitation services so victims aren’t sent to prison under prostitution charges. After four years of work, Safe Harbor was signed into law by Pennsylvania Gov. Tom Wolf on Oct. 24, 2018.

Lutheran energy around advocacy for victims of sex trafficking grew in 2014 at the Women of the ELCA’s triennial convention. “We passed a resolution for women to become knowledgeable about sex trafficking, to take a stand on it,” said Joyce Ray, former president of the Lower Susquehanna Synodical Women’s Organization.

Tracey DePasquale, director of LAMPa, saw the opportunity that convention created. “[LAMPa works] where the Holy Spirit is already calling disciples to act. In this case, there was already a statewide group of women who were informed and inspired.”

DePasquale also connected with the Villanova Law Institute to Address Sexual Exploitation, a Roman Catholic organization dedicated to creating systems to help survivors of sex trafficking. The institute was working on the Safe Harbor initiative with Pennsylvania Sen. Stewart Greenleaf at the time.

In partnership with women across the state who were invigorated to work for this bill, DePasquale and the LAMPa team helped channel that energy into advocacy. Congregations across Pennsylvania engaged in letter-writing campaigns and called legislators asking them to support the bill.

Ordinary disciples speaking on behalf of their neighbor remind policymakers that God is at work in the world.

“There were various ways that advocacy and sharing information took place,” said Linda Theophilus, pastor of Emmanuel Lutheran Church in Eastmont, Pa. “LAMPa provided information, and my congregation …  worked on letters to our legislators to make it happen.”

Many congregations also prepared soaps with human trafficking hotline numbers that were delivered to hotels and rest stops as part of the “Save Our Adolescents from Prostitution (SOAP)” project.

It took four years of advocacy work for the Safe Harbor bill to move through the bureaucratic channels of the Pennsylvania government. During the final months before the bill’s passage, advocacy efforts ramped up to put pressure on legislators.

Lynn Fry, LAMPa program director, accompanied several trafficking survivors on legislative visits. “With each visit, it became more apparent how important it was for the legislators to hear from survivors of trafficking to truly understand the depth of the problem,” she said.

“A couple of the legislators I had the opportunity to visit were very surprised that underage children were being arrested and placed into the criminal justice system. As they heard stories of survival, they recognized how easily young people found themselves in this unthinkable, vulnerable position.”

Jennifer Hope-Tringali, director for evangelical mission for new mission in the Lower Susquehanna Synod, also spoke to legislators about the bill. “I testified to the Senate judiciary committee from the lens of a faith leader who has a neuroscience background and experience with children experiencing trauma,” she said. “The hearing was attended by the committee but also by faith leaders and social service providers. Everyone present had a particular expertise to share.”

When the bill was signed into law, Villanova’s institute, one of the primary organizations behind the bill, expressed how invaluable LAMPa’s efforts were.

Sarah Robinson, justice for victims fellow at the institute, said, “Lutheran Advocacy Ministry of Pennsylvania, and director Tracey DePasquale in particular, were highly instrumental in advocating for the passage of Safe Harbor. They consistently supported us during Advocacy Days in Harrisburg, speaking at press conferences and meeting with legislative staff and other stakeholders.”

For the Lutheran advocates of Safe Harbor, their faith was a critical piece of their advocacy.

“When the church speaks as an advocate in the public square, their message is received differently,” DePasquale said. “We do not ask for anything for ourselves. Ordinary disciples speaking on behalf of their neighbor remind policymakers that God is at work in the world. We are the church of ‘God’s work. Our hands.’ But we are also called to use our voices for God’s reconciling and redeeming mission in the world.”

Theophilus agrees: “As Christians in the United States, our citizenship gives us a lot of opportunities and gifts. Being good stewards of the citizenship means we have a voice. We have a voice to ask our government, as well as our culture, to do things that are good and right. Our best advocacy is an expression of love for our neighbor.”

A vital response to human trafficking

‘It can happen to anyone’

Bishop thanks Women of the ELCA for leadership

When disciples use their voice
When it comes to helping shape our world to be more fair, more just and more compassionate, Christians have achieved much. By raising our voices to ask for policies that help others, advocates bring a welcome voice of conscience and reason to the public sphere.
Download Now