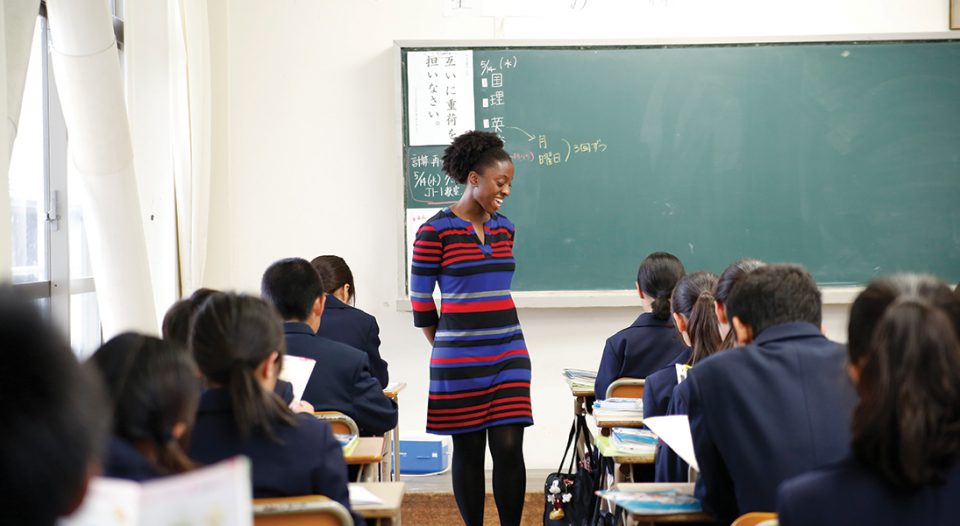 Randall Tallent was looking for a way to give back. Hannah Jensen-Reinke had a deep interest in Asian culture and mission history. And Jennifer Jarvie was following her destiny.

While different motivations led them to service, all feel a sense of purpose as teachers in the ELCA’s J3 (Japan 33-month) program. For more than 60 years, members of the ELCA and its predecessor churches have taught English classes in schools of the Japan Evangelical Lutheran Church. But J3 teachers don’t just serve—they, too, learn and grow in relationship with their Japanese companions.

A native of North Carolina, Tallent said serving as a J3 teacher has enabled him to “connect [with] Christians across the divides of language, culture and nationality.”

Before joining the program in 2016, he earned a graduate degree in Asian studies and taught English as a second language in U.S. public schools. Now he teaches at Kyushu Gakuin, a Lutheran junior and senior high school, and at an affiliated preschool, both in Kumamoto City, Japan.

“I love being able to inspire kids to enjoy learning while challenging themselves,” Tallent said. “That is true of teaching no matter where you are, but here there is an added dimension. When kids leave my class feeling accomplished or energized, they become more connected to a wider world. That is what I hope I am able to achieve in some small measure.”

In addition to teaching, Tallent attends Oe Lutheran, where he runs an English conversation class with congregation and community members. On Sunday evenings, he and other J3 participants hold an English-language service at Kumamoto Lutheran Church for Japanese and foreign residents.

Tallent is one of roughly 160 American Lutherans who have participated in the J3 program since it started in 1954. Y. Franklin Ishida, ELCA program director for Asia and the Pacific, said J3 began at the behest of missionary Andrew Ellis following a request from the church in Japan.

Ishida’s mother, Gloria, was the first female J3 back in 1956. She taught at Kyushu Jo-Gakuin, a Lutheran girls’ school at the time. “It’s notable the program is some 60 years old and continues to be a strong one,” she said.

Since J3’s inception, Y. Franklin Ishida said, the ELCA’s approach has evolved from a sense of mission “to” or “in” countries to a sense of mission “with” companions, consistent with the accompaniment model for mission adopted by the ELCA in 1999. That approach appeals to J3 participant Jensen-Reinke, a native of New York, who also teaches in Kumamoto City.

“[Accompaniment] calls us to walk humbly and lead by example,” said Jensen-Reinke, who wrote her college thesis on why Christian missions in Japan failed in the 1600s and 1700s.

One of her most memorable experiences practicing accompaniment occurred in 2016 after a large earthquake struck the city. In the weeks that followed, Jensen-Reinke and other J3s volunteered at a refugee area in her school, preparing and serving food.

“I know of a few people who began to believe in God and Jesus after seeing that we did not leave Japan when we could have,” she said. “We chose to stay and care for those who needed it.”

A legacy of reciprocal learning

Among the program’s biggest impacts, Ishida said, is the mutual sharing of gifts. J3s gain an understanding of what it means to belong to a minority faith, one often viewed in Japan as an outside religion.

Learning to convey the gospel where non-Christians are the majority presents “an opportunity for the J3s to grow as believers and as human beings,” said Nobuo Yasui, pastor of Hongo Lutheran Church in Tokyo, where Jarvie teaches English conversation. J3s, he added, also play “an important role for Japanese people to experience God’s love.”

“It’s very true, the saying, ‘We never know what another person is going through,’ ” said Jarvie, a Georgia native. “The program brings love and support for people. It brings community.”

Kimiharu Uchimura, principal at Kyushu Luther School, estimates that 13,000 students there have interacted with J3 teachers over the years. The program, he said, has prompted further interest in the English language and Christian faith.
Tallent believes it’s important for Lutherans to participate in such programs. “We, as Lutherans, as Christians, are part of a global church, a body in Christ that recognizes no borders and no linguistic or cultural divides,” he explained. “We are all equal and equally connected before God.”

He has observed firsthand J3’s legacy: “I hear about it, see it every day in the stories and smiles of people around me in Kumamoto.”

Tallent said a 70-year-old colleague of his was inspired to become an English teacher because of the impact a J3 missionary had on him 50 years ago. “I got to experience the joy when that same J3 came back to visit for the first time last year,” Tallent said. “Many of his [former] students came to meet him. They laughed and joked, experiencing great joy and nostalgia. … I hope that J3s continue to have that impact here, today and in the future.”