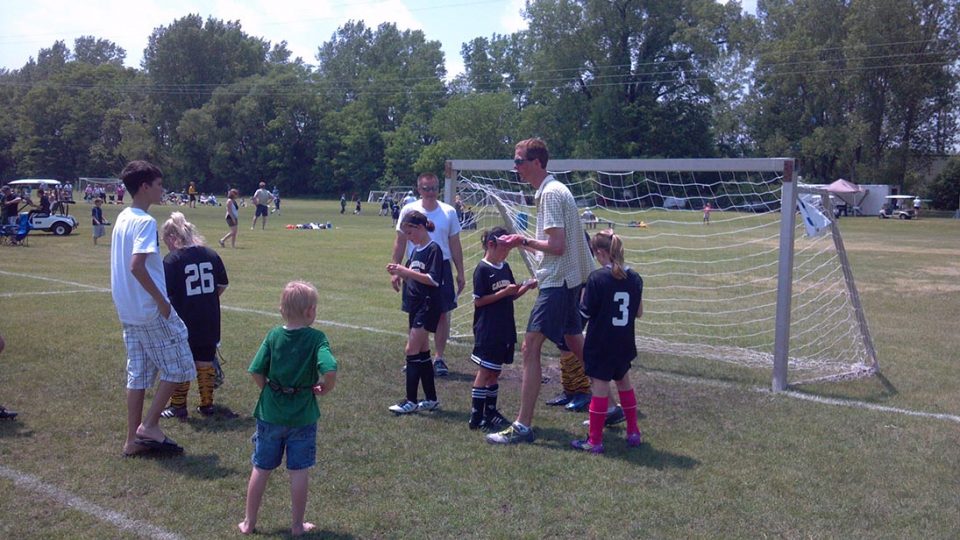 Between her words of encouragement, Sorenson hears about the daily lives of 50 middle school boys and girls. They talk about their classes, their friends, their families—as well as their hopes, dreams and fears.

“I really enjoy being with middle-schoolers—they still have a lot of joy and wonder about life,” she said. “It really allows you to be a positive influence on young lives at such a formative age.”

The deep conversations she has with her athletes develop over time and over miles. They’re not the kind that Sorenson, who also serves as pastor of French Creek Lutheran Church in Ettrick, Wis., typically has with youth at church.

For Sorenson, along with other clergy in the La Crosse Area Synod and across the country, coaching youth sports has become a valuable means of connection, both with team members who attend their congregations and with those who don’t.

It’s a form of outreach to the community, providing a service and setting a positive example. Pastors who double as coaches also demonstrate that youth pastors are more than their sermons and confirmation classes—they’re real people whose ability to help isn’t confined to Sundays and Wednesdays.

Student Shani Tiber found that having her pastor as her assistant basketball coach changed her perspective.
After two seasons of hoops at Tomah Middle School, she no longer saw Lindberg as a “strict church girl”—she was someone who understood her problems, had experienced similar things before, and shared how she overcame those challenges.

“She was always there for us,” said Tiber, now a high school sophomore. “She didn’t care if we won or lost, and she always had a smile on her face. We were really able to relate to her.”

Drawing up plays and writing sermons are two very different skills, but the roles of pastor and coach aren’t so different, according to people who have filled both. Lindberg thinks they overlap in the nurturing and care required to lead a group of people, no matter their age.

“Coaching junior high girls involves a lot of emotions, so you have to draw them into those couple hours of practice to connect, to help them grow in some way,” she said. “At church, maybe you just have that one hour of worship to connect with a congregation. That’s my goal: connect with what they’re going through and help them grow to go out into the world living their faith.”

Church not at odds with athletics

Steve Meyer—pastor of Immanuel Lutheran Church in Caledonia, Minn., and coach of his daughters’ soccer teams for several years—sees similarities in ’leading a team and leading a congregation. Both pastors and coaches set strategy and provide encouragement, but success is achieved through others’ cooperation.

“You’re trying to lead a group of people to accomplish some sort of goal,” he said. “A coach doesn’t do it for the people—the coach just tries to give them the tools for them to do it. And I see that in pastoring too.”

Libby Howe, director of evangelical mission and assistant to the bishop of the La Crosse Area Synod, welcomes the idea of pastors coaching sports. As family schedules grow more and more full, she said, it’s an indication that church and athletics don’t have to be in conflict.

When she previously served as pastor of a church, she made a point of regularly attending local sporting events—not as an act of evangelism but as one of connection.

“I always thought, ‘If that’s where community is happening, if that’s where people’s lives are, then I need to be there,’” she said. “People don’t separate us from the church, so what we represent is almost bigger than who we are as a person. Just being there is a statement that God is here.”

When Sorenson reunites with her cross-country team this fall, she isn’t looking to recruit runners to her congregation. But she is there in the spirit of ministry—doing whatever she can to help each boy or girl reach his or her peak athletic and human potential.

“I believe the Holy Spirit is at work in their lives, whether or not they would name it as such,” she said. “I want to help it live through whatever giftedness the Spirit is calling them to. Through coaching, you’re able to help young people discover who they are and become good community members and good citizens of the world.”