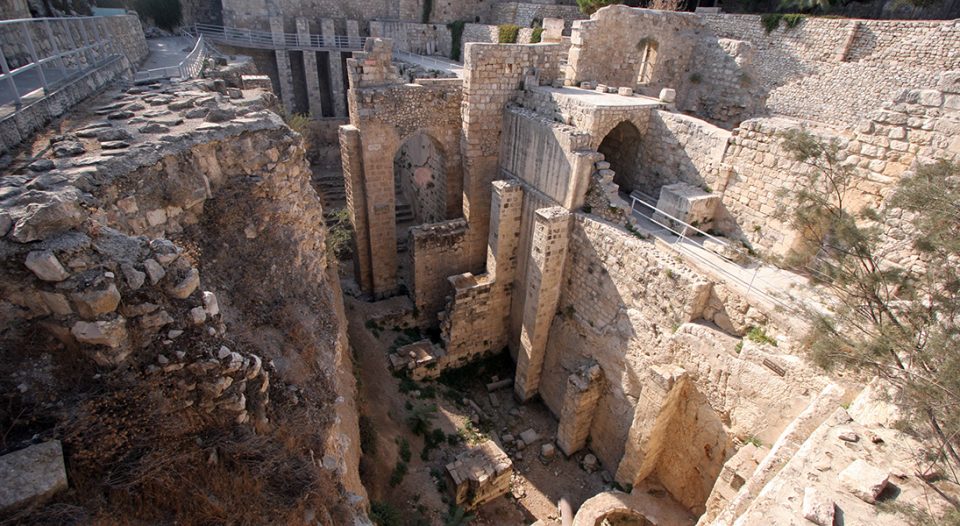 Ruins of the pool of Bethesda in Jerusalem.

This week’s lectionary texts are all about the uncontainable word, work and love of God that bursts forth into unlikely places. Far too often we in the church have a siege mentality, huddling up and trying to maintain our holy ways of living against a threatening world that seeks to have us compromise our values. I understand that perspective and believe much of the world is adversarial toward the sort of radical love and servanthood to neighbors that Jesus demands from us. But the siege mentality and walling off ourselves is exactly the opposite strategy from the one depicted in this week’s readings. The kingdom of God is on the advance into every corner of the world. It is invading strongholds, rather than building them.

The best example of the kingdom of God moving beyond borders comes from the Gospel of John. Jesus’ healing of the man at the pool of Bethesda was miraculous, but it was also a brazen attack on another religion. The pool of Bethesda was an Asclepieion, a shrine to the Greek god of healing, Asclepius. People sought healing in the pool when the god signified his presence by making the waters gurgle. (Most critical editions of the Bible don’t include verse 4 here because it seems to have been a later addition by someone who didn’t know of the Asclepieion.) We now know from archeology that a system of pipes could be turned on to release water from a reservoir into the pool, creating the effect attributed to Asclepius.

In this text, Jesus strides into the temple to another god, walks up to a disabled man and asks if he wants to be well (John 5:6). This man had been essentially discarded at the site, hoping that Asclepius would make him well. Instead, he watched the water bubble (when, cynical priests were turning on the “show”) and gradually lost hope of ever receiving a miracle from the Greek god.

But then the Son of God asks him if he wants to be well. The disabled man replies yes, but adds, “Sir, I have no one to put me into the pool when the water is stirred up …” (John 5:7). Jesus, as the author of life and the one through whom creation, including humans, are made, must have been deeply frustrated at this answer. But he simply tells the man to get up, pick up his mat and walk away (John 5:8). Bizarrely, even after he is healed, the man returns to the sacred area of Asclepius. But Jesus finds him again and says: “Do not sin any more, so that nothing worse happens to you” (John 5:14). Jesus walked into the cultic shrine not once, but twice, to peel devotees away from worship of a god that could not heal or save.

The kingdom of God is on the advance into every corner of the world. It is invading strongholds, rather than building them.

In the passage from Acts, the mission to spread the love and truth of God’s kingdom continues with Paul. After having a vision of a Macedonian begging for help, Paul and his companions immediately change course and head to Macedonia. In the city Philippi, Paul finds women gathered at a river and begins to talk with them. God opens the heart of at least one of these women, Lydia, and she becomes perhaps the first European Christian. The kingdom of God had spread to another continent!

Revelation tells us that eventually God’s light will shine brightly enough for all nations to see by it (21:24). The new Jerusalem is depicted as an international city, where nations will bring their glory and honor, and the gates will never be shut (21:25). Indeed, the tree of life will be available to humans for the first time since Eden, and it will provide healing for all nations (22:2). Revelation paints a picture of a time when God’s kingdom will have expanded all over the earth, and the radiance of God’s loving and just presence will illuminate the lives of all humanity. This is the goal of the kingdom—to bring the reign of the Lamb who was slain to everyone. This is not a power-seeking human, colonial project. Too often, spreading Christianity has been intimately tied with such evils, but here God simply wants to remove the curses of sin and death (22:3) and to wipe the tears from every eye (21:4).

Jesus used images like leaven (Matthew 13:33) and a mustard (Matthew 13:31) for the kingdom of heaven precisely because they spread indiscriminately and change the flavor of wherever they are. This is what we see Jesus and his movement doing. The movement isn’t taking over a place to extract resources, as so many human conquerors do, but to humbly spread a message of a messiah who was willing to die to rescue people from enslavement, most especially enslavement to sin and death. That is God’s outreach mission, of which we are privileged to be small, but vital, parts.