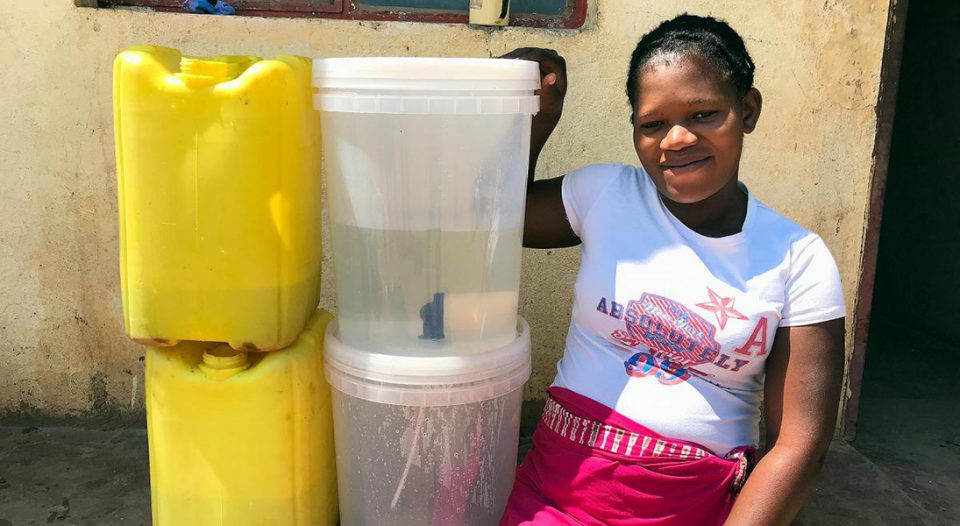 “Our life is better now,” said Francisco Thuboy Mauguese, a farmer who lives together with his wife and six children in Muchambonha village. He is one of the residents in Manica province, Western Mozambique, who received aid from the Lutheran World Federation (LWF) after Cyclone Idai struck his country. His family had been hard-hit by the storm: the harvest of sorghum, ground nuts and corn was completely destroyed, and all their livestock were swept away by the floods.

Now, half a year after the natural disaster, he and his neighbors see the difference a well-coordinated emergency response can make. By building emergency shelters, rehabilitating water pumps and bore holes and supporting in advocacy, LWF World Service has has made a difference in the lives of thousands of people in Manica province since the beginning of April 2019.

Cyclone Idai was one of the worst tropical storms on record to hit Southern Africa. According to the United Nations Office for the Coordination of Humanitarian Affairs, more than 600 people died in Mozambique alone when the tropical storm made landfall twice in mid-March 2019. Over 1.8 million people needed assistance. The cyclone also caused devastation in Zimbabwe and Malawi.

“The people in the community were desperate, they had never seen such a disaster before,” said Job Ngaroita Nguerebaye, LWF emergency response team leader in Mozambique. “Crops, livestock, shelter, household items and even family members had just been washed away.”

“Community life is getting back to normal again. We see families rebuilding their homes, eating together, children going back to school.”

“Life began in makeshift tents, people depended on food aid and unfiltered water as many water sources were destroyed or polluted,” he continued. “Education was interrupted, as schools had either been washed away or were used as holding camps for the displaced population. The desperate situation was made worse by destroyed health services as health facilities were equally affected.”

LWF started emergency assistance in April 2019, supporting people in three isolated locations in Manica province. The LWF’s humanitarian response was carried out in coordination with the Evangelical Lutheran Church in Mozambique, and supported by other LWF member churches and partners.

Half a year later, the change is visible. “We see so much more hope after our intervention,” Nguerebaye said. “Community life is getting back to normal again. We see families rebuilding their homes, eating together, children going back to school. Some families have even started to grow food in small garden plots. The presence of both national and international aid organizations gave hope to the people. They appreciated the fact that they were not alone in managing the situation and that there is a lot of good will, even from people outside the country.”

More than 1,600 families in Sussundenga and Mossurize received emergency shelter materials and other much needed items like kitchen sets, solar lights and mosquito nets. “We lived in an improvised tent,” said Francisco Thuboy Mauguese. “I have received shelter and tools along with a water filter, a family latrine and kitchen utensils for my family.”

Next to short-term housing, water and sanitation were one of the main concerns. Floods had polluted the water supply, leaving thousands without clean drinking water and usable latrines. By the time LWF arrived, the first cases of cholera had been detected, turning into a widespread epidemic by mid-April. “Many people in the village became sick after drinking untreated water from the river,” said Arminda Laice from Muchambonha village.

“We will not be able to prevent the next cyclone, but we can make sure people know what to do when it hits.”

LWF prioritized water and sanitation to prevent the spread of diseases in the project villages. This included rehabilitating existing water sources, providing new ones and building communal and family latrines. LWF staff also educated the local population on how to maintain good hygiene under the more difficult circumstances.

“Now, after installation of a hand pump by LWF, we can drink clean water and properly clean our houses. The children in the village do not get sick anymore,” Laice, herself now a member of a “water committee”, added. The committees were formed and trained by LWF, to make sure local people would be able to maintain and repair the water sources once the emergency team had left.

While the emergency response was planned as short-term intervention, sustainability was one of the key concerns, said Roland Schlott, LWF global humanitarian coordinator. “One of our strategic partners is the local LWF member church, the Evangelical Lutheran Church in Mozambique, who will continue to be part of the communities after our international team has finished its work,” Schlott said. He added that in every action undertaken, LWF staff worked closely with village administration and relevant government departments. LWF built on existing local efforts as well as purchased local materials.

“This has supported the local economy, given additional skills to people living in the community, and also linked them with relevant authorities. This way, we are trying to ensure our help is sustainable, and will have long-lasting effects for many years to come,” Schlott concluded. “We will not be able to prevent the next cyclone, but we can make sure people know what to do when it hits.”

This story was provided by Lutheran World Federation communications and was first published here.

“I give thanks to God for sending you here”