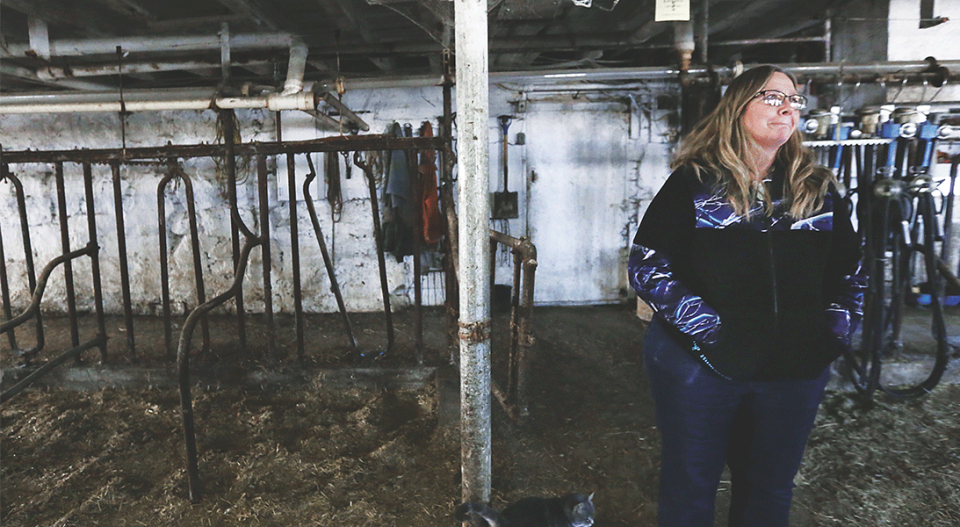 Brenda Statz stands in an empty milking parlor on her farm. She and her husband, Leon, had to sell their Holstein herd because of financial challenges, and Leon became depressed. He died by suicide on the farm in October 2018. Now Brenda, a member of St. Peter Lutheran in Loganville, Wis., and others from her congregation are working to raise awareness about farm stress and mental health. Photo: Amber Arnold/Wisconsin State Journal

A wet spring that complicated—or prevented—planting in the Midwest and an expanding trade war with China are contributing to what “Bloomberg” calls “the worst agricultural downturn since the 1980s.” Combine this with the yearslong pressure on small family farms to expand or get out, and farmers nationwide are struggling with challenges that not only place a strain on their pocketbook but their mental well-being.

In rural synods across the ELCA, congregations and leaders are rallying around members in the agricultural industry, trying to provide support and a safe place to talk, listen or, sometimes, grieve.

Brenda and Leon Statz took over his family farm outside Loganville, Wis., when they got married 35 years ago. Financial challenges eventually led them to sell their 50-head dairy herd and transition into grain crops and beef cattle. But Leon thought he had failed. He struggled with depression and felt embarrassed, even among his congregation of St. Peter Lutheran in Loganville that saw him as a beloved member.

“When the cows went, it was too much of a shift and he started panicking about finances,” Brenda said. “He blamed himself, even though it was because of things out of our control—the milk prices, the market. Some people can move on, but when you have depression issues or other things going on, it’s really hard to find a good place.”

Dale Meyer, a member of St. Peter, said many in the congregation knew Leon was struggling with depression, but they thought things would get better because he was getting treatment. At Leon’s funeral, another parishioner confided in Meyer that he, too, had been struggling with feelings of depression related to the stress of his farm. He asked Meyer why the community didn’t do something.

“I thought, ‘All we can do is talk about it,’ ” Meyer said. So beginning in January, he and a few others organized forums at St. Peter. They invited farmers and speakers who covered topics ranging from financial advice to suicide prevention training. About 50 people came to each of the three forums.

“Farmers are very private people and they don’t talk about a lot unless you ask them a question,” said Meyer, who grew up on a farm near Loganville and remembers when most—if not all—the families in the pews at St. Peter were farmers. “But there were people who told us their life stories and that they’d thought about suicide before too. They’d been wanting to talk about this but didn’t know how or who to talk to.”

Don Glanzer, pastor of St. Peter, said sharing stories was probably the biggest benefit of the forums. “People were able to network together and learn they’re not alone in this and other people feel this way,” he said. “We talked about how it isn’t a sign of weakness because you’re having struggles on the farm. It’s not that you’re not a good farmer or a good person or not managing well. The dynamics of depression make us not see things correctly.”

Brenda Statz also shared her story in the forums. “It’s kind of a release to me because I think it’s kind of my mission in life now. We have to bring more awareness to this,” she said, adding that she was glad to be doing this with her congregation.

Glanzer said the forums also helped increase awareness and brought the tight-knit community of Loganville, population 300, even closer. “Now when you see them in the area, they’re not just people who own the farm up there,” he said. “We’ve seen each other as people who struggle with issues, and how we live together in this broken world is really a measure of who we are as God’s people.”

The forums have garnered national media coverage, helping to expand the conversation to other parts of the country. “It’s certainly an issue that needs additional scrutiny and exposure,” Glanzer said.

In South Dakota, Alan Blankenfeld, pastor of Our Savior Lutheran Church in Flandreau, organized a community group to address mental health issues in his rural area. A farmer for 30 years before he was ordained, he knows the challenges people are facing. His concern increased when a farmer told him it wasn’t a matter of if he’s going to lose money this year but rather how much.

“I knew that if one producer says that, it’s probably not a specific case because farmers are notorious for keeping things to themselves and wanting to figure things out on their own,” he said. “The idea of the mental stress of it possibly leading to attempts of suicide or to suicide is what really got this group going.”

After Blankenfeld shared his concern with other pastors and community leaders, they formed a nonprofit called Moody County Cares. They held an event and invited speakers, including a professor who had done extensive research on farm stress and suicide. The event was livestreamed and recorded so people who felt more comfortable watching from the privacy of their homes would still have access to the information. The nonprofit also raised money to have the 211 hotline service expand its coverage to their area.

“We’ve seen each other as people who struggle with issues, and how we live together in this broken world is really a measure of who we are as God’s people.”

Blankenfeld said about a third of the people who make up Moody County Cares are congregation members, but the group is an organization for the community. “We are in the middle of an ag community and in a small town. Everybody knows that what affects farmers affects everybody,” he said. “The farm stress in our area hasn’t gotten better; it’s gotten a lot worse.

“I really think that going into this fall and winter and next spring, it’s going to be even more difficult for producers than it is right now. This isn’t something that’s just going to all of a sudden go away. I tell other pastors to keep track of your farmers and their families. This affects the whole family; they’re all carrying that stress.”

In the Southwestern Minnesota Synod, five faith leaders attended a training session about farm stress conducted by the Minnesota Department of Agriculture.

Janel Kuester, pastor of Christ Lutheran Church in Cottonwood, Minn., said it was helpful to network with colleagues who are dealing with similar issues in their congregations. She’s trying to pay attention to how the downturn in the agricultural industry is affecting not only the farmers but anyone associated with it—from the people who work at the agronomy center to those who sell seed.

“You might have a bank lender who sits across the pew from a farmer who is going to have difficulty paying back a loan,” she said. “How do we navigate that as a faith community so no one feels alienated in spiritual life?”

About a year ago, Kuester said members started talking about how the farmers who grow everyone’s food may have difficulty feeding their own family. They recently partnered with a few area congregations to open a food pantry. “Anyone who needs it can get food,” she said. “We thought it’s some way we can alleviate some of that stress.”

The training helped Jeff Greathouse, a pastor of Bethany, Arco, and Bethany-Elim, Ivanhoe, learn more about available resources. He said the farmers in his rural congregations seem to be in varying situations, so he focuses on individual conversations and lets people know he’s always available.

“I think it’s just about being present with them,” he said. “Every farmer I’ve been in contact with sees that farming is almost their core identity, so my first answer is the reminder that they are created in the image of God and that is their primary identity.”

Another training participant, Myron Crawford, vicar of Yellow Medicine Lutheran in Hanley Falls, Minn., said his congregation has several multi-generational farmers and there has been a lot of stress in the community. He’s found the best way to connect with people is by visiting them to really learn what they’re going through.

“I like to be real with folks,” he said. “I’ve found people are willing to talk to me if I’m willing to ask the question. It creates relationship and hopefully I’m someone they know they can trust. It’s easy to walk by and ask how someone is doing, but to look them in the eye can create a world of difference. For us as a faith community, we are called to do that—to truly be there—because Christ would do that. Christ would be interested.”

Sit in the front pew and pray