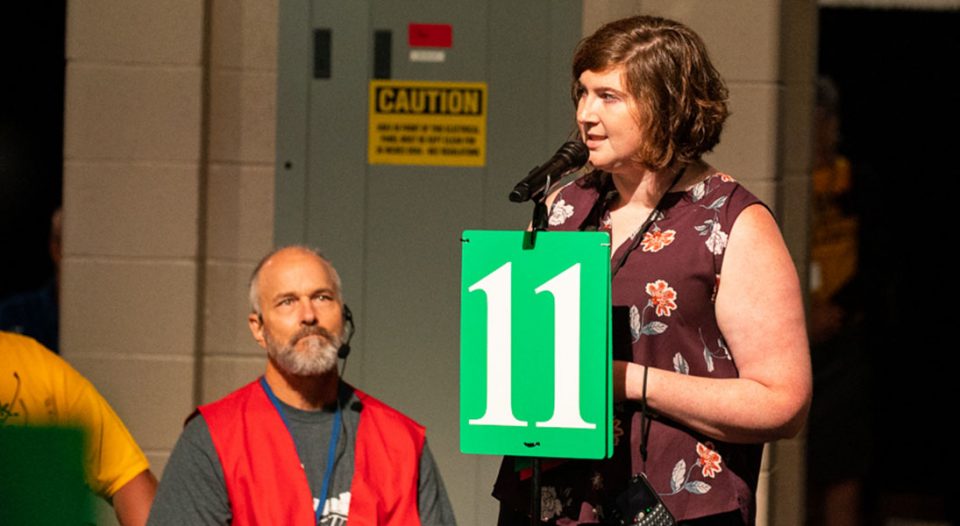 Debate over memorials continued at Plenary 4 of the 2019 Churchwide Assembly in Milwaukee.

The Churchwide Assembly adopted (829-33) en bloc 26 memorials on such topics as gun violence, gender identity, engagement in the Holy Land and seminary tuition. Memorials address broad policy issues or programs that relate to important missions of the church as God’s witness in the world.

A memorial originates from a congregation and is sent to a synod assembly for adoption before ultimately going to a churchwide assembly for consideration.

Memorials removed for separate consideration, and the action taken, include:

• Poor People’s Campaign. Affirmed (804-65), after defeating an amendment calling for the ELCA to endorse the National Poor People’s Campaign, the ELCA Church Council’s action to recognize the importance of the campaign; support its vision and goals that align with the ELCA’s social teachings; and encourage participation in the issues as a witness to God’s call for justice and love.

• Sanctuary. Reaffirmed (card vote), after much floor discussion and two amendments, the ELCA’s long-standing commitment to migrants and refugees; requested that appropriate churchwide staff develop educational and discernment tools around sanctuary; declared the ELCA a sanctuary church body; and requested that the Church Council provide guidance about what it means to be a sanctuary church body.

“Sanctuary is a response to the struggles of immigrants and refugees, a strategy to advocate for and amplify immigrant voices, a vision for what our communities and world can be, and a moral imperative to take prophetic action of radical hospitality rooted in the ancient traditions of our church,” said Christopher Vergara of the Metropolitan New York Synod, who presented the amendment to declare the ELCA a sanctuary church body.

“I think it’s urgent that we tackle this problem in a day when we have so [many] cacophonic voices out there regarding the role of religion in the public sphere, the role of Christian nationalism, the role of advocacy from religious perspectives, and we need to have a clear voice and message from what this church believes is relevant and up to date for our time and place,” said Peter Metcalf, Montana Synod.

• Migrants. Encouraged (811-44) ELCA members to use existing social teaching policies as guides to address harmful political rhetoric against migrants; and to request that appropriate churchwide units develop a plan for additional tools to provide education around political rhetoric and the accurate portrayal of migrants and refugees.

• Health Care Benefits. Directed (662-127) the Church Council, in partnership with the Conference of Bishops and Portico Benefit Services, to review the council’s recommendation for Gold+ coverage for all rostered ministers and ELCA employees, and to develop a health insurance coverage recommendation by the council’s 2020 spring meeting for 2021 enrollment.

The assembly adopted three resolutions, including a commitment (891-4) to support the World Council of Church’s “Thursdays in Black” campaign toward a world without rape and violence. Other resolutions were referred to the Church Council for later action. Resolutions for the whole church recommend a specific action to be taken by the ELCA via the churchwide organization, and are adopted by synod councils, then passed on to the Church Council.

The two additional resolutions adopted were:

• Day of repentance. Voted (887-8) to commemorate June 17 as a day of repentance for the martyrdom of the Emanuel 9—the nine people who were shot and killed by an ELCA member on June 17, 2015, during a Bible study at Emanuel African Methodist Episcopal (AME) Church in Charleston, S.C. The resolution also called for the development of worship resources around repentance from racism and for deepening conversations with the AME church.

Speaking to the resolution she submitted, Kwame Pitts, a pastor in the Upstate New York Synod, said, “How can we heal, church? How can we make an actual powerful statement to the world about how we honor their memory and be empowered to live out our faith through action than through our liturgy, through worship?”

• White supremacy. Condemned (893-5) white supremacy, calling all ELCA congregations to engage in a “study of the structures and rhetoric that empower and fuel racism and white supremacy and to take to heart the teaching of Scriptures, so we may all be better equipped to speak boldly about the equal dignity of all persons in the eyes of God.”

The resolution also states: “Language that refers to people of color or immigrants with words like ‘invasion’ or ‘infestation’ or ‘white replacement’ is racism and we condemn it.”