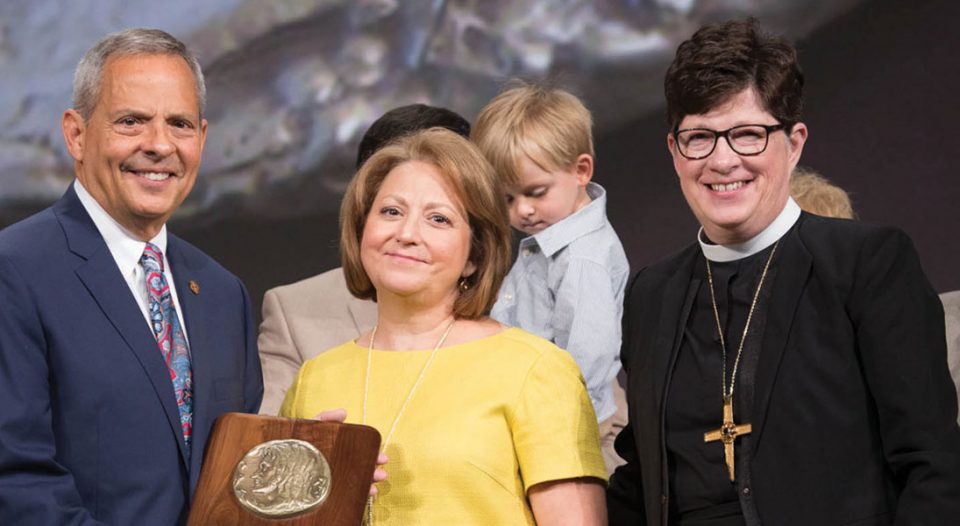 Carlos Peña, ELCA vice president, was presented the Servus Dei (Servant of God) award during the Churchwide Assembly. The award honors ELCA officers at the completion of their service. Peña (with his wife, Diane, and Eaton, decided not to seek a third term after serving since 2003.

In her report to the Churchwide Assembly, Presiding Bishop Elizabeth Eaton looked ahead to the next three years. She challenged the church to consider a variety of emerging priorities, including a focus on unity with other Christians, moving forward the work of Declaration on the Way and becoming an evangelical, missionary church in an increasingly secular culture.

Focusing on immigration reform, she noted that “there are more immigrants and displaced persons in the world now than at any time since World War II.” Calling on members to be advocates for refugees, she talked of people from Syria and South America and all over the world who leave their homes because they have no choice. Eaton emphasized our call to care for them: “These are children of God. They’re human beings.”

Eaton also  challenged the church to lead the way in confronting racism. In doing so, she shared an example of how white privilege helped her family, and then spoke of the Evangelical Lutheran Church in Canada’s successes in fighting racism in their country.

“To my European American brothers and sisters, this is a conversation we have to have among ourselves, and to be honest about this. But we can’t do it alone or in isolation,” she said. “We deeply need all of our brothers and sisters of color for us to understand what life is like in this country, and then we need to commit ourselves to do something about it.

“So please, would you go back to your congregations—and this is a tough one—and right now if this is being live-streamed, you can quote this and tweet this out: Pastors, when you start to get pushback from your congregations, just blame it on me.”

In concluding her report, Eaton called for more accountability in congregations and synods in pursuing these priorities. Acknowledging the challenging work ahead, which “God will give us the energy and the courage and the will to do,” she said: “In baptism we have all been marked with the cross of Christ, and are all called not to run away, but to run to those dark and deadly places, bringing the light and life of Christ.”

In his final report to the Churchwide Assembly as vice president, Carlos Peña opened with a reading from Acts 10. Quoting “The harvest is plentiful, but the laborers are few,” he urged voting members to “bloom where you are planted and share the beauty and love that comes from living out the love of God.”

Peña then laid out the ELCA Church Council’s recommendations for actions to be considered by the assembly. Notably, he described the recommendation to approve “Declaration on the Way: Church, Ministry and Eucharist,” which names 32 points of agreement between the ELCA and the Roman Catholic Church. “While the declaration also identifies about 15 topics of varying degrees of doctrinal differences remaining to be resolved, this action is clearly another sign of the ELCA’s commitment to making visible the unity that is God’s gift in Christ,” he said.

He also highlighted the Accompanying Migrant Minors with Protection, Advocacy, Representation and Opportunities (AMMPARO) strategy, which would support those fleeing the humanitarian crisis in the Honduras, El Salvador and Guatemala. “[We] are called to bear witness to the conditions affecting so many communities and work to find solutions that will acknowledge the humanity in all of God’s children,” he said.

In closing he said, “I thank God and thank you, too, members of the [ELCA], for giving me this extraordinary opportunity to serve as vice president …. What I might have given in service is nowhere near what I have received in return.”

Following his report, the assembly stood to recognize his 13 years of service. Peña was then presented with the Servus Dei Award, which honors ELCA officers at the completion of their terms. Upon accepting the award, he said, “If you would’ve told me going into Milwaukee in 2003 that I would have been elected as vice president of this great church, I would have said, ‘No way. What do I know about God’s work?’ I kept asking, ‘Why me?’ But that quickly changed to, ‘Why not me?’ When God called, God provided, and for that I’m thankful. It’s been a great 13 years. Thanks be to God.”

Although the ELCA has continued to decline since its inception—like many mainstream denominations—Secretary Chris Boerger encouraged voting members to see all of its 3.7 million members as missionaries. “Rather than nostalgically remembering a church that probably never existed, we are called to do what God has always called the church to do, share the gospel in word and deed with the neighbor and the stranger,” he said.

Boerger also spoke of the ELCA’s unique governance in which each of the three expressions is interdependent. He named the challenges this presents and called on each expression, congregations, synods and churchwide organization, “to claim its identity as the [ELCA].”

Boerger emphasized the need for amendments to three continuing resolutions that address the unmet goal of 10 percent diversity in the church, striking this “arbitrary percentage” and instead making a strong commitment to embrace diversity. “The demographics of our neighborhoods are not matching the demographics of our congregations,” he said, urging congregations to take ownership of this commitment.

Ruminating on the assembly theme, “Freed and Renewed in Christ,” Boerger concluded, “We are a church in transition. We being freed from that which would condemn us and renewed so we can live as God’s hopeful people in a world in need of hope. We Lutherans have just the right theology for this time of transition. We know we will not bring in God’s reign perfectly in this world and yet we know the presence and hope of God in the face of fear, terror and doubt around us.”

Norman said the churchwide organization received $47 million in revenue from the portion of offerings congregations designate to share with their synod and churchwide organization to fund local and global ministries. This number has continued to decrease over time, she said, noting that the Church Council will continue to monitor this trend and plan for the future.

She also spoke of financials on churchwide ministries and noted that the churchwide organization has stewarded its current operating budget well, receiving “unqualified audit opinions in each of the years 2013-2015.” Norman lifted up the work of current ELCA financial ministries, the Mission Investment Fund, Portico, and the newest addition, the ELCA Federal Credit Union.

In closing, Norman thanked ELCA members for their generosity: “As instruments of God’s love, we have accomplished so much more together than we ever could have done alone. We are truly church together for the sake of the world.”

“The budget … is about the mission to which we believe God is calling this church,” she added. “Each dollar represents our hope to touch a life and be part of God’s transforming work in the world.”