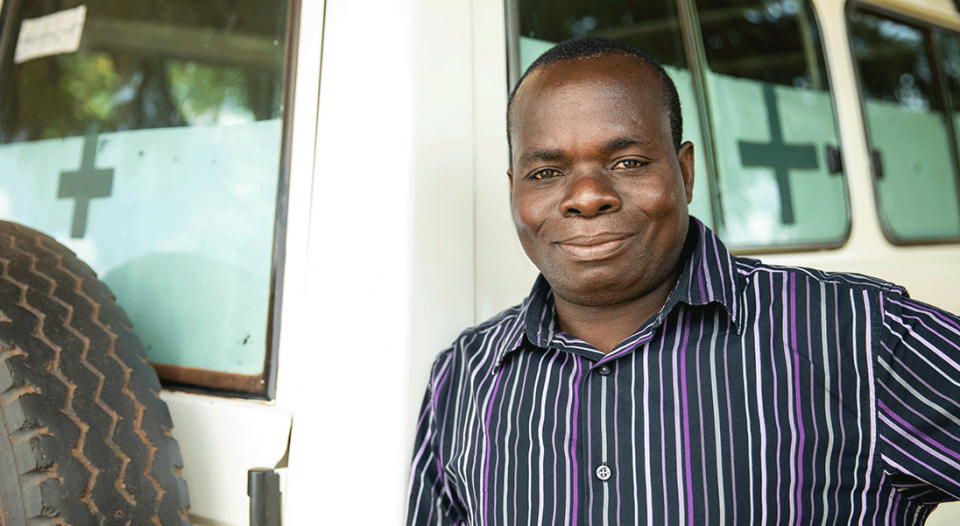 Projects supported by ELCA World Hunger in Beni, Malawi, include this mobile clinic.

Life can be unpredictable for Elise Ephraemu, a subsistence farmer in Beni, Malawi. Not only does her family’s daily sustenance depend on fair weather for growing crops, but she’s raising two young children in an area where malaria is common. Her daughters contract malaria several times a year, and it’s a 6-mile walk to the nearest hospital.

They are among more than 3.4 billion people at risk of malaria, a preventable and treatable disease that spreads through mosquito bites. Symptoms include high fever, diarrhea, vomiting, pain and confusion. Left untreated, malaria can cause death. The disease kills more than 430,000 people per year, according to the World Health Organization (WHO), and is especially dangerous for children.

In 2011, the ELCA intensified its efforts to end malaria by launching the Malaria Campaign. Over five years, ELCA members and congregations donated more than $15 million to combat this disease. Funds were shared with ELCA companions in 14 African countries—where 92 percent of malaria cases occur, according to the WHO—to implement innovative health care ministries. Now, eight years later, the fight against malaria continues through the enduring work of the campaign and ELCA World Hunger.

The ELCA’s companions and partners took a comprehensive approach: from the immediate—providing mosquito nets and improving access to malaria testing and medication for children—to the long-term—advocating for better access to health care and initiating sustainable livelihood programs.

“So much of our health and health outcomes are determined by factors outside of a clinic and hospital,” said Katy Ajer, ELCA program director for health and sustainable development. “[That includes] the food we eat and how it was prepared, what we’ve been taught by those around us from a young age on how to treat a cold or other illness, the available water source, etc.”

Additionally, companions knocked on doors, hosted community meetings and put on performances to raise awareness of malaria prevention and treatment. “It is great to see churches working to address these root causes of health through new forms of health education, like song and dance,” Ajer said, adding that such tactics influenced and inspired ELCA members.

A 2017 evaluation of the Lutheran Communion in Southern Africa’s malaria program confirms increased awareness and reach in communities, where people suffer from malaria less often than before the campaign began.

The Malaria Campaign also funded programs to help people as they worked to improve their livelihoods, Ajer said. It’s true that people living in poverty and struggling with malnutrition are more vulnerable to malaria. But when they increase their income, they become less susceptible to the disease and health care becomes easier to access.

One of the campaign’s beneficiaries is Mai Mdlungu, who lives in the Gokwe North District of Zimbabwe. Gifts to the campaign helped Mdlugu and 24 other women start a savings and loan group. They pooled their funds and borrowed from each other to grow their small businesses.

Despite her husband’s initial skepticism, Mdlungu began baking and selling buns. Soon she had earned enough money to buy goats, which quickly bred and multiplied. Selling goats paid for their children’s school fees, and improved economic options made their family less susceptible to malaria.

Nowadays, Mdlungu’s husband is supportive: “I got married to an industrious woman, and she has just woken me up from my deep slumber.”

Vision for the future

After a period of success in global malaria control, progress appears to have stalled, according to a 2018 WHO report. To people whose lives can be endangered by malaria, the news hits close to home.

For Ephraemu, providing her daughters with care is a little easier thanks to the ELCA and the Evangelical Lutheran Church in Malawi (ELCM). Instead of walking to the hospital, she can secure tests or medication through a mobile clinic, an ELCM program started in 2017 and sustained by World Hunger funding.

Although the challenges are great, the church’s vision of a world without deaths from malaria persists. The Malaria Campaign’s work goes on through World Hunger, which supports church and community-based health programs like this one in Malawi and around the world.

A malaria message by bike