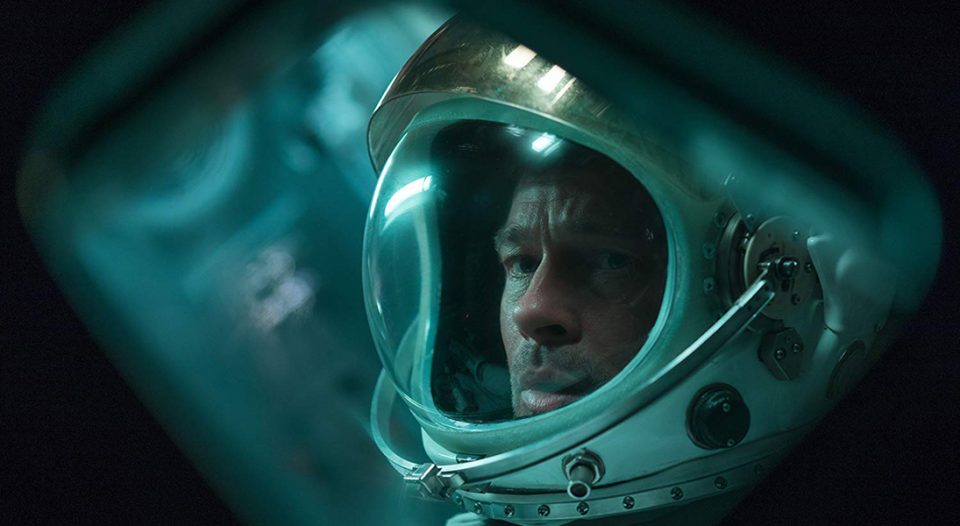 In the opening scene of Ad Astra, astronaut Roy McBride (Brad Pitt) scales an antennalike tower that reaches into Earth’s upper atmosphere. With the cosmos above him and our planet below, he works until an astral pulse strikes the tower. McBride watches without emotion as explosions hurl his colleagues into the air, before calmly detaching himself from the wreckage and plummeting toward Earth. The camera takes his perspective as he drops, the stars receding and the ground rapidly approaching.

The earthbound opening chosen by writer-director James Gray might seem inappropriate for a movie whose title means “to the stars,” but it foreshadows Ad Astra’s narrative arc. Much of the film does take place in outer space, as Roy travels from Earth to Mars to Neptune in search of his missing father, H. Clifford McBride (Tommy Lee Jones), a legendary astronaut whose deep space research may be responsible for the threatening pulses. But even as the younger McBride moves from space station to space station, he cannot escape the pull of Earth.

In flashbacks, Roy longs for a father who was distant even before traveling the galaxy and for the wife he’s barely acknowledged (played by Liv Tyler, out of focus and in the background). But Roy considers all this to be part of the job he and his father have chosen, his perspective affirmed by the psychological evaluations he completes throughout the movie: “I am focused on the essentials to exclusion of all else. I will not allow myself to be distracted. I will not allow my mind to linger on that which is not important.”

There’s a big difference between sneaking aboard Martian rockets and, say, planning vacation Bible school gatherings, yet many Christians can relate to Roy’s attitude. We know that we have important work to do in God’s service and that a lot of things can distract us. Practical limitations force us to make decisions about priorities. But those decisions can result in minimizing actual people, reducing them to distractions that must be excluded for the good of the mission.

With breathtaking images of humans being swallowed up by the expanse of space, Ad Astra dramatizes the temptation to minimize other people.

That attitude contradicts Jesus’ behavior in the Gospels. Luke 8 finds Jesus on a mission to heal the dying daughter of a synagogue leader. But when a suffering woman touches his robe and forces him to stop, Jesus doesn’t scold her for distracting him. Instead he waits and acknowledges her, taking the time to listen to her and call her “daughter.”

Scenes like this fill the Gospels: Jesus waits as a woman washes his feet; Jesus mixes sand and saliva to heal a blind man; Jesus pauses his teaching to watch a sick man lowered from the ceiling. People were never inessential to Jesus’ mission because people were the mission.

With breathtaking images of humans being swallowed up by the expanse of space, Ad Astra dramatizes the temptation to minimize other people. Roy should be consumed by his mission to stop his father’s destructive experiments, and we understand why he threatens the people who stand in his way. But when Roy, in contemplative voice-over narration, muses on everything from his longing for his father to the existence of God, we can put his plan into perspective.

The meaning for the mission isn’t in the sky. It’s on the ground, because that’s where we find the people God made and loves. To do God’s work, we are to follow Christ’s example and go from the heavens to Earth, from the stars to the dirt, among the people we’ve been called to serve.