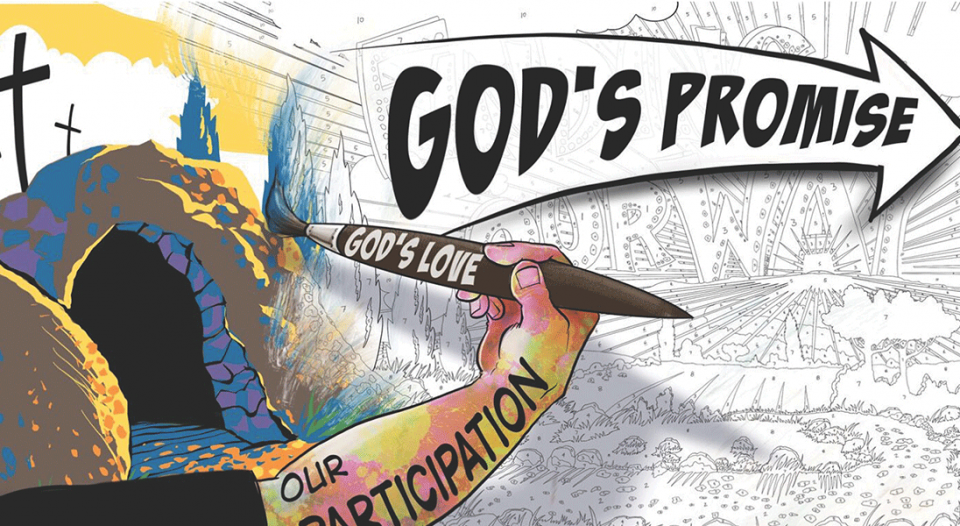 Steve Thomason faced a massive blank canvas, his back to the congregation, and opened his arms wide, lifted his head and prayed. He was preparing to accept whatever God wanted to come out of his hands and onto the canvas.

Then, like a tennis player with a winning shot, his right arm swung forward and dotted the canvas with specks of smoky paint.

While the congregation sung and spoke the “Seven Last Words of Christ” cantata, Thomason—whose vocations of artist and pastor have merged for decades—transformed his first vigorous splashes of paint into a journey of Jesus to the crucifixion. Many watching were so mesmerized that when a video projection prompted them to leave quietly, they simply sat and stared at what they had seen, taking in what it did to them emotionally and spiritually.

Not every work of art by Thomason, a pastor of Easter Lutheran Church in Eagan, Minn., has the same visceral, immediate impact, but the goal for all of them is the same.

Thomason’s ministry is to use his cartoons, paintings and other art to help connect people to the word of God in the way he knows best—the way he has done with written texts of all kinds for most of his life.

“Each week I would do a cartoon illustration of the passage that we were reading. And then I’d write it like a daily devotional.”

As a pastor’s kid, Thomason first preached a sermon in sixth grade at a Detroit soup kitchen. Around the same time, he started realizing that he could draw things and have them look as he imagined.

Although he had long harbored a dream of being an animator, by the end of high school he had many interests and wasn’t sure how to best use his skills. “I could go the ministry route … and go to seminary and become a pastor. I could take the academic route. Or I could go to art school and become an animator,” he recalled.

After a night of praying about it, Thomason was hired the next day to draw caricatures at an amusement park near Chicago. This led him to Las Vegas, where he did more of the same.

Eventually he took a position at a congregation and worked to establish a network of home churches. That’s when he was able to combine his two passions.

“House churches don’t have a pulpit, so what I did was, every week we agreed to read the same passages of Scripture,” he said. “And each week I would do a cartoon illustration of the passage that we were reading. And then I’d write it like a daily devotional and I would email it out to everybody.”

For five years he created an extensive library of devotional cartoons. When the house church network ended, he moved to Minnesota, with no plans to preach. But then he met an ELCA pastor who encouraged him to continue serving.

“God used him to call me back into ministry,” Thomason said. “When he encouraged me to come and serve at his church, that’s when I stepped into the ELCA and Lutheran theology—and I found a home, because I had been kind of wandering for a while.” He would eventually earn a doctorate in missional leadership from Luther Seminary, St. Paul, Minn.

Thomason’s next call was Easter, where the congregation has embraced his use of artwork during sermons. He has found that using illustrations is an effective tool for ministry.

“We are more visually literate as a society because of the ease of producing visuals,” he said. “People say, ‘Pastor Steve, when you use your pictures, it just becomes so clear to me.’ The image communicates something within itself. It also helps them track through the logical progression of the sermon. I think people are so trained to be visual that it helps them pay attention and it ties the sermon together cohesively.”

“People say, ‘Pastor Steve, when you use your pictures, it just becomes so clear to me.’ The image communicates something within itself.”

Lamont Koerner, Easter’s interim lead pastor, agreed: “The two biggest growing areas at Easter are the young families and those people who are over 70. And I hear both of those populations talk about the uniqueness of Steve’s approach. If he has an illustration, it helps them to think a little more and differently about how the Bible stories work.”

Dave Unmacht, congregation council president, said he can see how it helps engage worshipers more intimately. “Steve’s preaching sermon style is so unique and creative,” he said. “It’s unlike any other that I’ve experienced or witnessed.”

Through his website (stevethomason.net), Thomason’s work—art of all kinds, animation, writing, sermons—has spread across the world. Some of his artwork can be downloaded for a dollar, even though he’s aware he could make more money from them.

“Every part of the world sends me a message, from different countries in Africa, Asia, Europe,” he said. “I have no idea how many people actually use it. I was just at a conference and three different pastors came up to say, ‘Thanks for your stuff.’ All I care about is that people are growing deeper in the realm of God.

“Right on my homepage is my mission statement: ‘To grow deeper in the love of God through Jesus Christ in the power of the Holy Spirit for the sake of the world.’ That’s why I do what I do.”