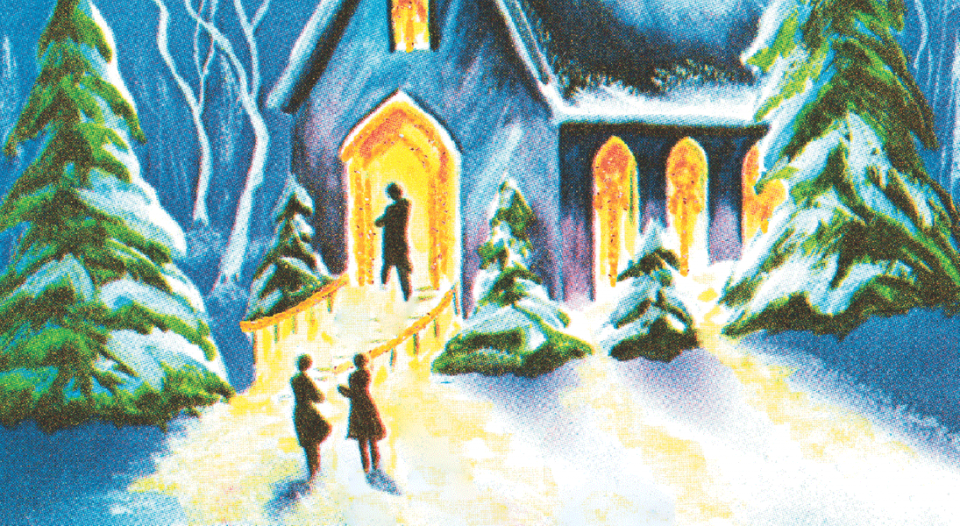 I’ve had many wonderful Christmas celebrations over the years. The most memorable one was more than 60 years ago, before I was ordained. I was attending Luther Seminary in St. Paul, Minn., and my wife, Anita, and I drove to Wind Lake, Wis., to celebrate Christmas with my parents and my younger brothers and sister.

Their home, a parsonage, was directly down the hill from Norway Lutheran Church, where my dad was a pastor.

The beautiful candlelight worship service in the old church was packed that night. Afterward, my wife, mother and siblings walked to the parsonage, anticipating our Christmas Eve tradition of exchanging gifts. My dad and I stayed to wish those leaving a “Merry Christmas” until the sanctuary was empty.

As we walked out the door, I was surprised to find that we weren’t the only people still at the church. Two young girls stood outside on the steps. I asked them why they were still there, and they explained that they were waiting for their brother to pick them up and take them home. But they were a little worried because their brother had been having some problems with his car.

It was Christmas Eve and I was eager to join the rest of my family, but we couldn’t leave these girls alone in the cold to wait for their ride. We invited them back into the church.

That was the first time I told the story of that unforgettable night. The story of when my dad, a pastor, and me, a pastor-to-be, were reminded of the true meaning of Christmas.

We all waited together, regularly looking out the door for their brother’s arrival. As we waited, I tried to be hospitable. I asked them their names, but I can’t remember what they were. I was thinking more about us than them.

As time passed, it became harder to be cordial or hospitable, as we were so eager to get home and be with our family around our tree to open presents. I felt resentment building and even thought, “Why did these two girls have to come to church tonight?”

After waiting for what felt like an eternity, we finally saw the lights of a car coming up the country road. It had to be the girls’ brother. We would finally be able to get to our home and family. This made it easier to be cordial, and we wished them all a merry Christmas.

The brother’s car had trouble starting but, since we were on a hill, he apparently got it going by rolling it down through the adjacent cemetery. We left the old church and got into our car.

As we turned into our driveway, I happened to look down the road toward the highway, which was less than a quarter mile away. It was a clear, bright, moonlit night, so it was easy to see, especially with the snow along the road reflecting the light.

It looked like a car had stopped on the road near the entrance to the highway. We turned around and drove toward it to investigate, suspecting that it was the car that had just left the church. Once there, we saw the girls and their brother, trying to push the car. We stopped and helped them push the car to a gas station nearby.

The service station was, understandably, closed on Christmas Eve. So we slowly pushed their car to another larger station about a mile or so away. It, too, was closed. We knew of an auto repair shop a couple miles in the opposite direction from where the girls and their brother lived. They left their car in a grocery store parking lot and we took them to the auto repair shop, but we didn’t expect anything to be done that evening.

What an inconvenience for Dad and me to spend that time away from our family. The thought kept going through my mind that if these two girls hadn’t come to Christmas Eve worship, we could have been home, opening our presents and enjoying some of my mom’s special Christmas goodies. If only I hadn’t looked down the road and seen their stalled car.

The owner of the repair shop lived in the house adjacent to it. The brother talked with him but, of course, there would be no repairs on Christmas Eve. He told the shop owner where the car was parked, gave him the keys and his phone number, got back into our car and that was it. We knew there was nothing else we could do but take them to their home, which meant more time away from our Christmas Eve with our family.

The route took us over snow-covered roads, and we knew it would take a considerable amount of time to get there and back home. We worried about what our family was thinking, waiting to celebrate Christmas and having no idea why we weren’t home yet.

As we slowly drove those back roads, I continued to feel frustrated that our Christmas was spoiled because these girls had come to church tonight and had a brother with a broken-down car. My growing resentment made it difficult to continue being cordial, but as we got closer to their home, I forced myself to make small talk.

“I suppose you’re going to go home to celebrate Christmas,” I said.

The older of the girls responded, “No, our dad doesn’t believe in Christmas.”

“You have a Christmas tree, don’t you?” I asked.

“Then what do you do for Christmas?” I asked.

She immediately responded to my question: “We had our Christmas at church tonight.”

Wow. That hit me—hard. These girls had gone through such an effort to get to church to celebrate the birth of Jesus. I felt ashamed of all my negative thoughts about how they had interrupted my Christmas Eve.

I began to realize how this had all been a special Christmas blessing and maybe a wake-up call about the real meaning of Christmas. I got choked up as we reached their home and the three of them got out of the car. I wished them a final “Merry Christmas,” knowing that their celebration was over.

When my dad and I finally got home, our family was irritated with us for being so late, but their attitudes changed when we told them of our time with the girls who had come to the Christmas Eve service that night. That was the first time I told the story of that unforgettable night. The story of when my dad, a pastor, and me, a pastor-to-be, were reminded of the true meaning of Christmas.

I wasn’t on the hills outside Bethlehem the night Jesus was born, the night angels announced his birth to the shepherds. Nonetheless, I received a message from two angels—two young girls—about what the real meaning of Christmas is all about.

Finding home: No crib for a bed