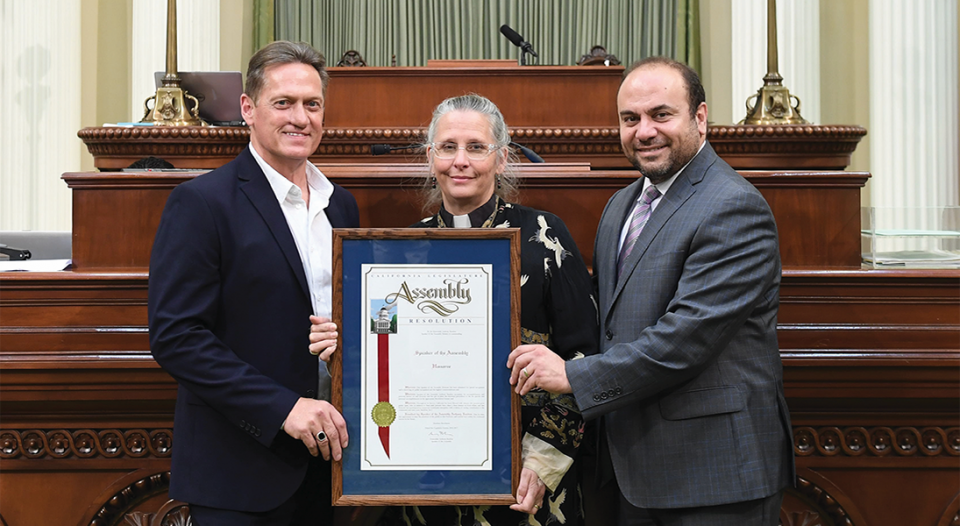 A few years ago, members of St. Matthew Lutheran Church, North Hollywood, Calif., began passing out sandwiches to food-insecure people at a nearby park.

That small effort to address the community’s most pressing issue has now grown into a wide-ranging, multifaceted community-assistance program.

The impact made by the congregation and their pastor, Stephanie Jaeger, may seem extraordinary, but she isn’t surprised. And Jaeger believes their blueprint can be replicated by urban and rural congregations of any size in the ELCA.

Named by Ventura Blvd magazine last year as one of the women in the area making “our world a better place,” Jaeger listed several keys to being an integral part of the secular community’s health. The first is to discover what problems need addressing. Next, it’s important to become an active advocate—making connections with local government, law enforcement and organizations that can be partners in making changes.

“You have to have leaders who are comfortable claiming power and voice in the public square,” Jaeger said. “And that’s something I really believe in—community organizing. I think that one of the things we bring to the community as a church is this centuries long ability to create community. So taking that gift into the public square is absolutely critical.”

In the public square, though, Jaeger said it’s important to have a clear vision and to use simple language “that is not church language.”

“They know I’m a Lutheran pastor,” she said. “They know I’m representing the church, but I’m not necessarily out there only talking about Jesus. I’m talking about transformation and liberation and justice and responsibility and accountability and building community and building relationships. The language to use in the public square that people can connect with, [that] won’t trigger them to turn away, is really important.”

A major part of the congregation’s community-building was through Jaeger joining the NoHo Neighborhood Council. She was contacted by Paul Storiale, the council’s president, who said they were looking for someone to represent religious organizations. Jaeger now serves as its vice president, and Storiale said she has been integral to the council receiving greater respect from local government.

“She is very good at remaining down to earth and treats each individual with the same level of respect, whether they share her views or not,” he said. “Many people who are nonreligious expect otherwise. When you meet Stephanie, it is understood that you are always welcome to come to her church, without the outright invitation. I have witnessed for myself that people are beginning to visit her Sunday worship services because of who she is, and not for what it is.”

Another major component for the congregation’s community outreach has come from forming the NoHo Home Alliance, a nonprofit working with people experiencing homelessness.

The centerpiece for the alliance is its drop-in access center, which began as a once-a-week event and now is every Monday and Wednesday. It prepares guests to accept housing placements, while also providing for several immediate needs, such as food and clean clothes. Thanks to a little investigating, showers also became available.

Jaeger and St. Matthew member Arthur Figueroa realized that her office included a storage room that was an old shower. “I remember her coming out and saying, ‘You know what, I think I have a different idea for this. I can make my office in another space,’” Figueroa said. “Little by little, she laid out her vision of what she wanted.

“We started out very small compared to where we’re at now. People who would come through regularly, they started telling other people who were experiencing homelessness, and we grew and grew.”

Each week, dozens of people line up before the doors open. Along with showers, food and clean clothes, the center has medical care professionals and representatives from several service organizations on site.

Jim Loken, another longtime church member and the NoHo Home Alliance president, said growth of the nonprofit has been one step at a time. “We started … just bringing peanut butter and jelly sandwiches to the park and finding homeless people there,” he said.

The other aspect of the alliance is housing placement, so partnerships have been formed. Jaeger said the placement rate for people working through the alliance is significantly higher than the city average.

The biggest concrete success so far came from the approval of a 40-unit building for low-income residents. Jaeger got to chair the meeting of the NoHo Neighborhood Council when it was unanimously approved. The vote may have looked simple, she said, but it was years of community involvement and gaining trust that led up to it.

Jaeger would enjoy speaking to any congregation wanting to start a nonprofit arm or to be more effective at helping a community’s pressing needs.

“People know I’m motivated by my faith,” she said. “We say we are committed to being Jesus, not just talking Jesus.”

For the sake of the neighborhood