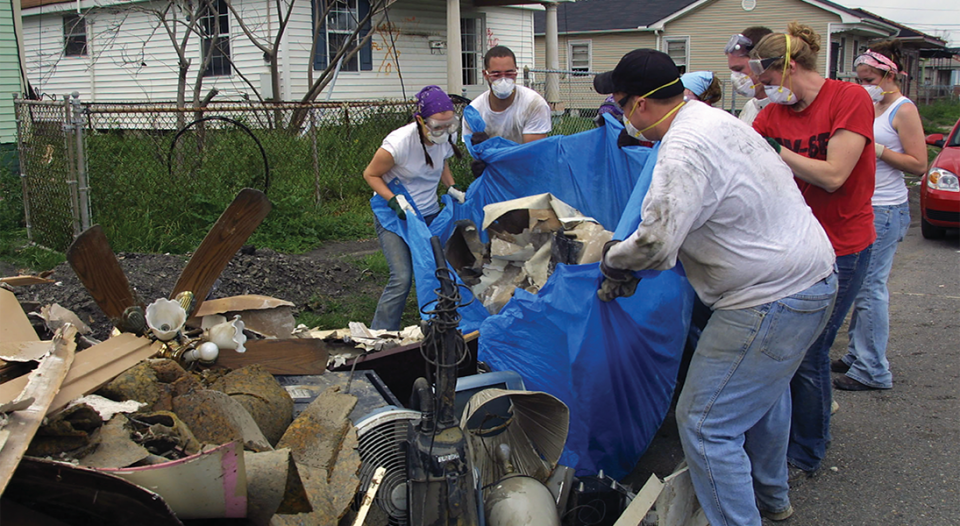 Volunteers remove debris from an abandoned house in the Lower Ninth Ward of New Orleans following the destruction done by Hurricane Katrina.

Participants from LDR affiliates and partners addressed the data behind climate change and its impact on communities. They were driven to action by the question “What does this mean for our work?”

In response, LDR hosted its 2019 consultation in October in New Orleans, with an expanded audience that included social ministry organizations and representatives from synods, including bishops, directors for evangelical mission and congregational leaders. The consultation was designed to move beyond the initial data and science to explore strategies and tools for participation in climate change mitigation and adaptation practices.

In addition, the event provided space to discuss the ways in which climate change impacts communities, and to plan how, in participants’ varied roles, they might address these impacts as church together.

Opportunities to share current practices and explore context-specific concerns and strategies were provided, emphasizing pre-disaster preparedness and community resilience. One such opportunity was presented by Amy Stelly, a New Orleans native and a board member for a local environmental stewardship nonprofit, the Urban Conservancy (UC).

Stelly led participants on an “Urban Waters” driving tour, where she explained the history of the city’s neighborhoods, how they were affected by Hurricane Katrina and the state of the infrastructure in place to protect communities from future events.

By working to implement the lessons of its partners and practitioners on a broader scale, LDR aims to lessen the impact of future climate events.

LDR, in partnership with other ELCA ministries, is dedicated to learning from the example of innovative projects featured at the consultation to integrate mitigation and adaptation practices into its disaster response programs. One such project is UC’s Front Yard Initiative.

Kristy Hitchcock, a single parent, moved to New Orleans four years ago after her daughter graduated from the University of New Orleans. “She told me she wasn’t coming back because she loved New Orleans so much,” said Hitchcock, who quit her job, sold her house and relocated.

In New Orleans, paving yards was once a popular way to create additional parking spaces and reduce property maintenance demands. When Hitchcock bought her house, her entire front yard and about 40% of her backyard had been paved with concrete, which restricted water from sinking into the ground, increasing the burden on drainage systems. “When it rained, I couldn’t even go out in my yard without rain boots,” she said.

Hitchock decided to apply for the Front Yard Initiative, a UC incentive program that educates homeowners on stormwater management practices, connects them to local green-sector professionals and reimburses homeowners $2.50 per square foot of paving removed up to 500 square feet. The project works to improve New Orleans’ safety and beauty.

Through UC, Hitchcock has created an oasis in her yard and has helped mitigate the street flooding in her neighborhood. “I started it because I love to garden and I wanted to be outdoors, but it wasn’t enjoyable,” she said.

Hitchcock sees the project as “something for your own home that you will enjoy, that is going to be benefiting your neighbors and the city, ultimately, if this water that I’m trapping doesn’t go down the drain.”

By working to implement the lessons of its partners and practitioners on a broader scale, LDR aims to lessen the impact of future climate events.

The lessons of the consultation have also been carried forward through young Lutheran advocates who are applying what they learned there in their work.

Hottinger finds her involvement in LDR valuable for sustaining her advocacy. “Through the [LDR] network, I am able to learn more about the personal impacts and struggles that disasters leave on people, which can help me in my work as well as in building systems for other young people personally impacted to strive [for climate action],” she said.

“Going to the conference was truly a life-changing experience. It inspired me to see the amount of people who work on the front lines of disaster, day after day, and still stick [to it], strong and true. But most importantly, it helped me learn about the importance of community and how community is the driving factor in change.”

She points to a consultation presenter who addressed relief in the aftermath of Hurricane Katrina as being particularly meaningful: “One of the statements she made was that, when Katrina was occurring, the Red Cross came in to provide food for individuals. … But commonly, people feel unsatisfied with the food, or they don’t eat it, because it isn’t their food. In a time of such trauma and pain, feeling comfortable should be a priority, but so often, it isn’t.”

“Going to the conference was truly a life-changing experience.”

This was one of the consultation’s ongoing themes, Hottinger said, adding, “So many times in the world of disaster response, people step into someone else’s community and end up bringing their own cultural values, leaving out the ones already there.”

In the wake of disaster, Hottinger learned, “most of the time, we overlook the importance of community, [focusing instead on] what may make us happy or benefit ourselves economically, rather than looking at what other people may require.” She expects to confront the issue often in her advocacy work.

The trip to some of the most affected neighborhoods emphasized the resilience of residents impacted by climate change. For outsiders, Hottinger said, it can be easy to ask why people “keep coming back” to a place that is increasingly threatened with being underwater. “But no—the [people of] New Orleans are so much higher than sea level,” she added. “They are strong, trustworthy and, all in all, a community.”

Conversations in the LDR network since the consultation have been grounded in the ELCA’s commitment to justice, concentrating on structural and systemic barriers and opportunities for engagement in climate change mitigation and adaptation. Discussions have emphasized environmental justice, disaster and the impact of climate change on vulnerable populations.