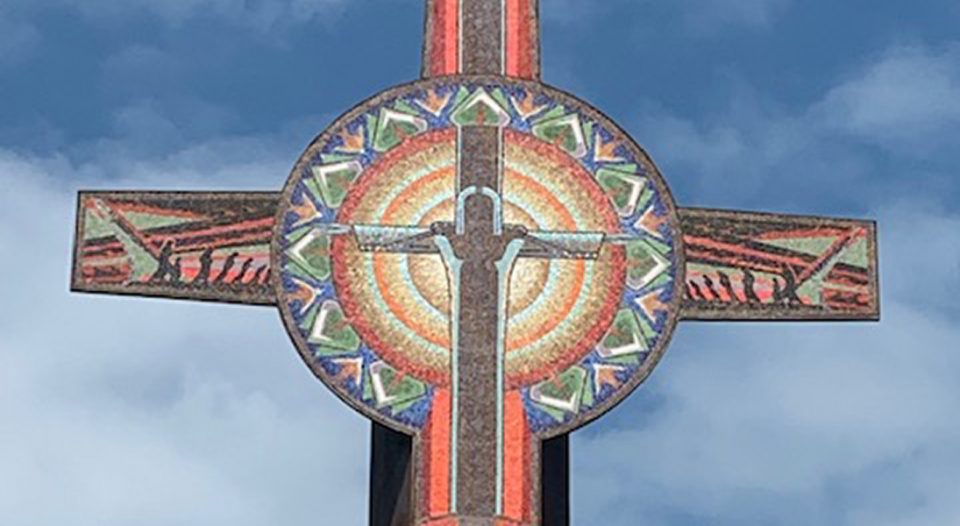 The Tower of the Four Winds, designed by Lutheran pastor F. W. Thomsen, was rededicated Oct. 2019 at Black Elk-Neihardt Park in Blair, Neb.

Editor’s note: The following address was given by John Thomsen on Oct. 5, 2019, in Blair, Neb., at a rededication ceremony for the Tower of the Four Winds, a memorial to Lakota Sioux holy man and Catholic catechist Black Elk and to John G. Neihardt, author of the influential book Black Elk Speaks.

A year ago, I received a VHS tape of a speech given by my late father, the Lutheran pastor and professor F.W. Thomsen. It was from the 1987 dedication of the Tower of the Four Winds, which my father designed. I was delighted and moved by hearing my father’s voice once again, but I was struck by how short his speech was—11 lines in all—and surprised by its strong Judeo-Christian emphasis.

At the time of his first profound vision in 1872, Black Elk was only a child, and Christianity had no part in the boy’s life; rather, he’d been brought up with the spiritual teachings of his people. He held these teachings deeply within his heart until his death in 1950 (and, no doubt, into the next world). He did not become a baptized Christian until he chose to join the Catholic Church in 1904, at the age of 40, and later he became an important catechist for the church.

I wondered what speech he was talking about. After some research, I discovered it was Crazy Horse’s deathbed speech—a speech the great Lakota chief (a cousin of Black Elk) gave shortly after being bayoneted, likely without justification, by a U.S. soldier at Fort Robinson. It reflects Crazy Horse’s love and compassion for his people and his deep sense of justice for all people. My father, no doubt, was aware of these qualities and was taking an opportunity to give a nod of respect to him.

Black Elk envisioned symbols that were not only significant for the Lakota Sioux but at the very heart of the Christian message as well.

The rest of my father’s speech consisted of two short Bible passages: “I lift up my eyes to the hills—from where will my help come? My help comes from the Lord, who made heaven and earth” (Psalm 121:1-2), and “For God so loved the world that he gave his only Son, so that everyone who believes in him may not perish but may have eternal life” (John 3:16).

This was beautiful in its simplicity. But I wondered why my father, the founder of this park, hadn’t spoken about Black Elk’s visions or about John Neihardt’s book Black Elk Speaks. Wasn’t that what the dedication of this park and the Tower of the Four Winds was all about?

It dawned on me that Black Elk was envisioning symbols that were not only significant for the Lakota Sioux but at the very heart of the Christian message as well.

Neihardt and my father often spoke of the “cosmic Christ spirit”—a spirit of love and wisdom that has permeated the entire universe and has been available to all mankind from the beginning of time; a spirit that, in the early 1870s, chose to enter dramatically into the life and visions of the young Black Elk.

This common thread between Black Elk’s visions and a universal Christ consciousness must have been what my father found so powerful, and it explains why he chose to share these profoundly beautiful Bible verses.

As we look at the symbolism on the beautifully restored Tower of the Four Winds, we see the crossing of two universally important roads.

We see the black and stormy Road of Difficulties on the horizontal arm of the tower, with figures draped in black as if in mourning, bracing themselves against the winds. These figures could represent Jews being led into Babylonian captivity and, much later, into concentration camps; Africans being pushed onto slave ships; Indians being forced from their homes and onto the Trail of Tears; or any people, as we see in abundance today, tragically being forced to flee their homelands. This was the terrible road that the young Black Elk foresaw for his people.

Every member of the human race, to a greater or lesser degree, walks on this road of pain and difficulties. We walk this road often because of our own deliberate actions but also through the death of loved ones, through sickness, through the pains and debilities of old age and in many other ways.

The Sacred Red Road, on the other hand, depicted on the vertical arm of the tower, is the road of deep spiritual truth, understanding and attunement with higher powers. It is the road of right thinking, a road of grace and of light. This is the good road Black Elk envisioned and worked to put his people back onto after the terrible destruction of their entire way of life.

All of us who have found this Sacred Red Road have discovered that, where the black road merges with the red road, there is a holy place filled with spiritual light—a light that, if we embrace it, is available to us all and will bring us peace that passes all understanding. In this place, the heart and soul can be repaired, restored, renewed.

During his first great vision, Black Elk saw one of the spiritual grandfathers of his people holding a bright red stick, which symbolized the Sacred Red Road. This stick was alive and pulsating with immense spiritual power. Suddenly, Black Elk saw it growing and sending forth branches, and from the branches, many leaves emerged and murmured sacred prayers, and within these leaves, the birds began to sing joyously.

If we embrace it, this light is available to us all and will bring us peace that passes all understanding.

In what is called the Messiah Vision, Black Elk saw the figure depicted today on the Tower. He told Neihardt that when he first experienced this vision, he wasn’t sure who this figure was; later, he felt he had seen the Son of the Great Spirit. In the vision, he saw 12 men coming toward him. They said, “Our father, the two-legged chief, you shall see.” He went to the center of a circle and saw the sacred tree in full bloom. Against the tree, he saw a man standing with outstretched arms.

“The man looked at me … and I didn’t know whether he was a white man or an Indian,” Black Elk told Neihardt. “This man said to me, ‘My life is such that all earthly beings that grow belong to me. My Father has said this. You must say this.’

“And as I looked at him, his body began to transform …. His body changed into all colors …. All around him there was light. Then suddenly he disappeared. It seemed as though there were wounds in the palms of his hands.” This revelation of Christ to Black Elk, of course, beautifully parallels the glorification of Christ on the Mount of Transfiguration.

Black Elk’s tremendous faith in the Lakota and Christian teachings—even after his people had been dragged mercilessly along the Road of Difficulties—and the universality of his vision compelled my father to work tirelessly for close to 20 years on creating artwork that was based on Black Elk’s visions.

My father dedicated himself to creating something very fine by founding Black Elk-Neihardt Park and the Tower of the Four Winds on Dana Hill. It was something he prayed all people would value, be inspired by and, in times of hardship, visit and find strength and solace in.

John Thomsen
John Thomsen is a visual artist living in New York City. His career has ranged from textile design and illustration to working with emotional healing techniques.

Claimed by God through baptism