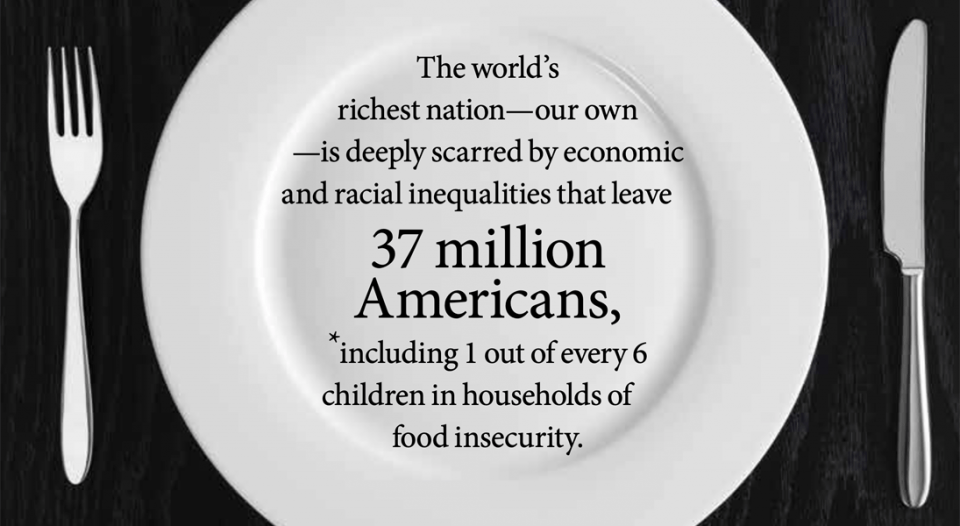 * According to the U.S. Department of Agriculture and Hunger Free America, respectively.

Such hunger in a nation as prosperous as ours grieves God and shames all of us. Yet ending hunger here is easily within reach.

Doing so would cost less than it does to support our current level of hunger—in the same way that vaccinations save, rather than add to, the cost of health care. It would also reduce widespread suffering and help heal our bitterly divided nation.

But ending hunger requires government leadership, and that depends in large part on us exercising our calling as Christians in the political arena. We often resist that. Many prefer private charity because it’s thought to be the most direct and effective way to help hungry people. Charity is not only the favorite but often the only response of local congregations.

Charity does much good in alleviating hunger. But the charitable efforts of all Americans combined don’t come anywhere close to ending hunger. Missing is an officially mandated goal and process for bringing hunger in America to near zero.

Ending hunger would cost less than it does to support our current level of hunger—in the same way that vaccinations save, rather than add to, the cost of health care.

Ending hunger would cost less than it does to support our current level of hunger—in the same way that vaccinations save, rather than add to, the cost of health care.

For that, government leadership is essential. No other entity can act for the nation as a whole or summon the nation’s resources for achieving it. Government, too, is an instrument of God’s love to call upon when the scale of suffering exceeds the capability of our voluntary efforts.

Imagine that eight grocery bags represent all food assistance for Americans in need. How many of those bags represent food given through private charities, and how many through government programs? When I ask that question of church groups, they consistently guess that charities account for most of the food, and usually by wide margins. They are surprised to learn that seven of those bags (87%) represent federal food assistance, and only one bag (13%) comes from charities (according to Feeding America).

Why this wildly mistaken impression? One reason is that, generally, American churches consistently promote charitable food relief but rarely urge more government action against hunger. By placing efforts against hunger on only the one bag, do we not risk perpetuating hunger by our silence about government policies that could greatly reduce hunger? And do we convey the message that it’s OK for us to duck our calling as Christian citizens when it comes to justice for hungry people?

Doing so would contradict Martin Luther’s understanding of life in Christ and love for neighbor as embracing all aspects of life, including our responsibility as citizens—especially important with a government of “we the people.”

A renewed sense of hope

In my book Silence Can Kill: Speaking Up to End Hunger and Make Our Economy Work for Everyone (Eedrmans, 2019), I maintain that erasing hunger is such a basic, morally decent goal that it could attract growing support across political lines and give all of us a renewed sense of hope in our democracy.

With guaranteed annual targets for getting from here to there, we could end hunger within a few years. The best way of reducing hunger would be for people to have work and wages that lift them well above the poverty line. But that won’t happen quickly or completely; and those who, for good reasons, cannot or should not work also need to be well nourished.

Government programs (such as the Supplemental Nutrition Assistance Program, formerly food stamps) would fill remaining gaps to assure adequate nutrition. Charities would continue to serve people, though not as many, when fewer face food shortages.

Once the goal to end hunger is set, the process of determining the actions to get there—and the benchmarks for measuring progress and keeping it on schedule—would show deep connections between hunger and (for example) poverty, job creation, housing, education, family erosion and racial injustice. In this way, ending hunger could become the catalyst to bring us together around related inequalities that currently tie us in knots.

Better understanding of such connections would give policymakers, as well as the public, new insights on how we might respond with economic and social reforms.

Erasing hunger is such a basic, morally decent goal that it could attract growing support across political lines and give us a renewed sense of hope in our democracy.

People tend to speak past each other regarding the main cause of hunger and poverty. Conservatives see deficient personal behavior, while progressives see harsh economic barriers—and hunger never ends. But when we trade insights rather than dogmatic certainties, we make headway.

Remarkably, in rare displays of bipartisanship over the last two years, Congress has rejected drastic cuts in both domestic and international food and poverty assistance. Instead, Congress improved and expanded them, thanks in large part to growing public support from churches and citizen advocates. This suggests that we could be near a turning point and might be close, perhaps even in the next Congress, to making ending hunger a nonpartisan cause.
All of us should give it a big boost.

Arthur Simon
Arthur Simon is the founder and president emeritus of Bread for the World and the former pastor of Trinity Lower East Side Lutheran Parish in New York.

A walk to end hunger