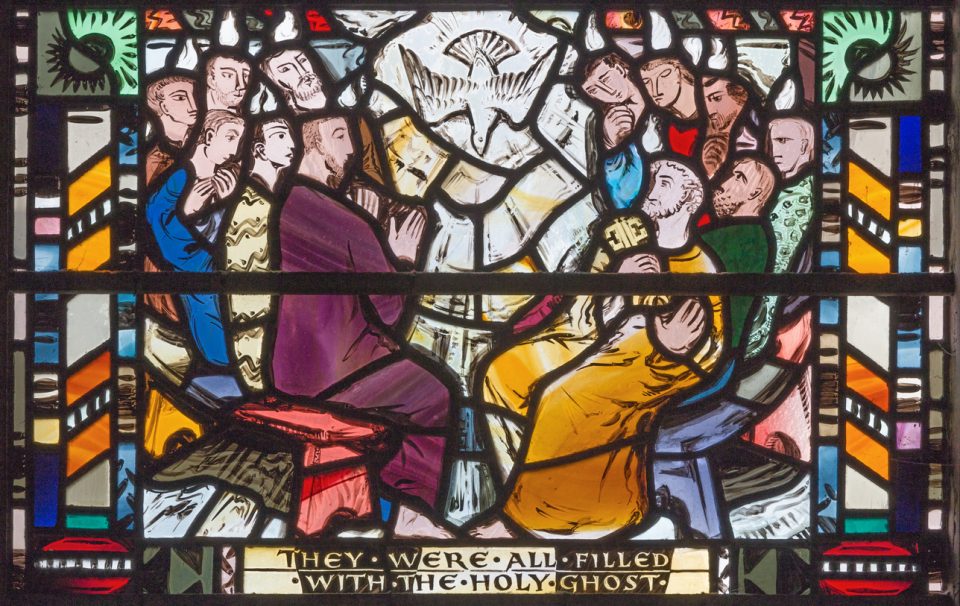 I think of a man walking slowly out of town with his head down. It’s night. His whole body heaves with emotion—inconsolable, completely alone. In a crumpled ball on his knees in a field beside the road, he weeps for shame.

Back in town, around the fire, there is an accusation: “Surely this man also was with him”(Luke 22:59). The man failed to summon even a hint of defense for his best friend.

Fifty days pass. The same man whose life felt over now stands in the same streets, animated with passion about his old friend. A few weeks before, he couldn’t speak. Now he practically shouts, openly and with power. Who could have predicted this turnaround? This bold unexpected testimony from an erstwhile shadow-seeker is almost as shocking as an empty tomb.

Something strange has gotten into this man—something beyond his skill to manage or predict. He doesn’t now testify due to intellectual decision after weeks of regretful moral introspection.

This man, who once heard a fated crowing, now discerns a new calling. He who once lost his tongue has somehow found it. He preaches a sermon of all things (Acts 2:14-36) in the same city streets where he felt threatened and afraid only seven weeks before. Absolutely nobody in a million years could have envisioned this very guy saying those daring words in that same place.

Perhaps friends in your orbit have trouble swallowing the saga of a dead man coming back to life at Easter. (Give thanks for such honest friends.)

Mustering evangelical nerve, here’s what you might offer in response. (Recall that the Spirit still intrudes into the lives of tongue-tied Lutherans like us in these latter days.) Tell them to start with the third article of the Apostle’s Creed and work backward. Begin with Pentecost and a Spirit who inspired disciples in such a radical fashion that they risked their lives only days after running for them.

Here, also, is a resurrection story: a man once utterly dead in his shame comes back to life and speaks.

In his short story “Chemistry,” my friend Ron Rash, a fiction writer and poet, describes a father, unnamed, starting to rediscover his childhood Pentecostal roots. On Wednesdays, he creeps away in secret to a worship service in the upstate South Carolina mountains to experience something that’s missing in the mainline congregation where his family now belongs.

One Sunday, driving home from church with his wife and son, the father can’t hold it in any longer: “That wafer might as well be a burnt marshmallow for all the passion it evokes in that crowd. If Jesus Christ and his disciples marched in during a service, the ushers would tell them to have a seat, that the congregation would be glad to hear what they had to say as soon as the monthly business meeting was over.”

An authentic experience of the Spirit is notoriously unmanageable, moving and changing us over time. The Spirit births new and unbridled passion for Christ.

What in the wide world got into these early disciples? Skeptics in the 21st century can say what they will about the resurrection of Jesus—wish fulfillment, elaborate hoax. It’s quite another challenge to write off what happens to Peter.

Lutherans are said to be notoriously shy when it comes to talking about the Spirit. We can be dubious around those who speak a language foreign to our reserved Protestant upbringing. The Spirit, uncontrolled wind and fire, may unnerve us a bit. Well, rightly so.

Long ago the Spirit changed a tongue-tied disciple who, only days before, couldn’t bring himself to admit he even knew his best friend. The Spirit restlessly, relentlessly searches for human vessels—hesitant, flawed actors in an ongoing drama. People like us, prone to keep Jesus in the shadows.

What in the world got into Peter? Well, the very same thing that’s gotten into all baptized people.

Some advice about your testimony? Start with the third article of the creed. From there, work backward.

From pilgrimage to Pentecost

Winds of change, fire of passion