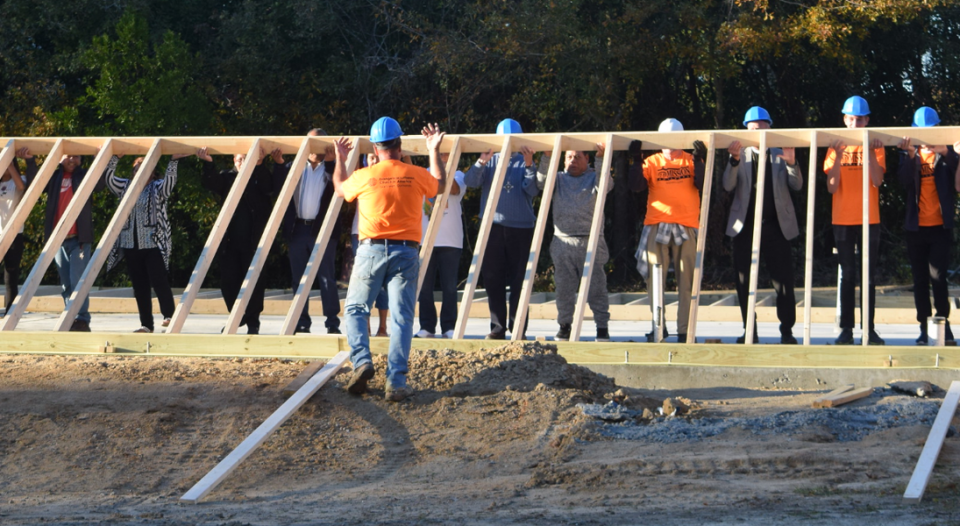 Mission Builders volunteers raise the first wall of a new building for Cristo Rey, an ELCA Latino ministry based in South Carolina. Mission Builders is an ELCA volunteer organization that provides labor and project management to ministry-related building projects.

Anyone driving along Oak Street in Lexington, S.C., this spring may notice about a half dozen construction workers—and a few volunteers—attaching boards to a wood-frame skeleton with a prominent arch in front.

What the passersby won’t be able to see is that this frame and the concrete foundation represent a yearslong dream being fulfilled by the South Carolina Synod.

When finished, the structure will serve as a permanent home to Cristo Rey, a Latino ministry that began 12 years ago with two families and has since grown into a congregation that sees dozens of baptisms a year. The new congregation soon will leave St. David Lutheran, West Columbia, S.C., which has shared its space with Cristo Rey for several years.
The spiritual leadership for Cristo Rey comes from the Leone family, beginning with Andres, a doctor, who founded the congregation. Now his father, Jorge, serves as pastor.

For Jorge Leone, the concept of ownership is crucial to the development and growth of Cristo Rey. “We are so grateful to St. David’s for receiving us with open hearts and arms and sharing with us their sanctuary,” he said. “They were like our mother church. But at the same time, it is like two families living in the same apartment. You don’t have the freedom to make certain decisions in how you will do things.”

“I will use a language [the congregation’s children] feel more comfortable speaking. They are more American in some ways than Latino.”

Currently, Cristo Rey has one weekly service, Sundays at 5 p.m. With a new building, Leone hopes to add more worship times. His dream is to have a Latino service in English, because that’s the language most of the children speak outside the home.

“I will keep the traditions, but I will use a language they feel more comfortable speaking,” he said. “They are more American in some ways than Latino.”

Leone said one of the biggest challenges for Cristo Rey is its diversity. While there’s a unifying element of Spanish-speaking worshipers, they represent at least 10 nationalities, each with unique traditions.

“But when you receive people with love and interest, and you know their names, they see you care,” Leone said.

Herman Yoos, bishop of the South Carolina Synod, explained that Cristo Rey’s growth is important not only for Latinos in the area but for the ELCA’s future. “As we are becoming an older denomination, it’s important to have the energy and passion of our Latino brothers and sisters. It renews the whole church,” he said. “It’s like Pentecost is happening in South Carolina. I helped them with 22 confirmations in December. They have 35 to 40 kids who come forward for the children’s message.

“It’s a young church, and they are beginning to understand what our gospel is all about. Many were not churched at all. And so they’re learning … what it means to be loved by God, that they’re forgiven by God’s grace and that they matter.”

Kohn, a member of St. David, has witnessed Cristo Rey’s ministry from the beginning. When he came on board as architect, he engaged congregation leaders in conversations to develop a design ideal for their membership.

“It’s just been a miracle. I don’t know how else to say it.”

“You can look at that facade and begin to see elements of the Latino culture,” Kohn said. “The stark white stucco color is direct from one of the churches in Oaxaca, Mexico, that they really liked. The arch piece in the middle and the arched entry that’s sort of lined with bricks also come from that example. … And once you come in, I think that that driveway lined with trees will be a very comforting kind of place that ties everything together.”

Bill Graves, director of Mission Builders, said he wanted to work with Cristo Rey from the minute he heard about the congregation’s project. With the start of construction, Graves and Leone have seen strong participation from Cristo Rey members working on the crew.

Kohn said the Lexington community has been supportive of the new congregation, and he’s excited to see members of Cristo Rey and other outside sources contribute money, time and resources to fill each need as it arises. Several Cristo Rey children raised what money they could to help with the funding, Leone added.

Graves said construction of Cristo Rey’s building should be complete by June provided the project continues on schedule.

In search of hospitality

‘Maria was strong, but God is even stronger’