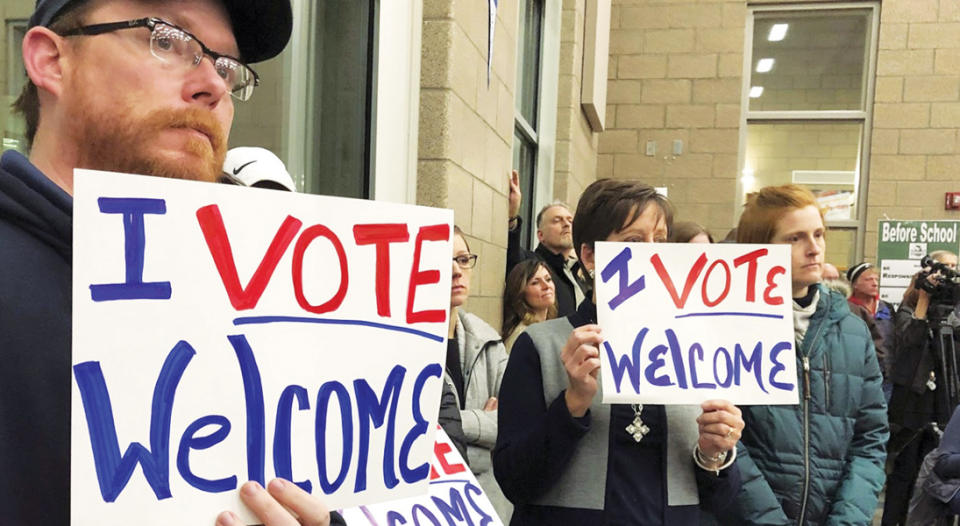 Concerned neighbors gathered in September 2019 for the commissioner’s meeting to consider refugee resettlement in Burleigh County. ELCA leaders and members of Bismarck Interfaith showed up in force as a voice for welcoming refugees.

Lutherans in Burleigh County, N.D., came out in force to show their support for refugee resettlement last December before county commissioners voted on the issue. The meeting followed a September 2019 executive order by President Donald Trump that directed states and counties to provide written consent to accepting refugees for resettlement in their localities.

North Dakota’s governor and commissioners of the two other state counties that receive refugees had already given their consent to Lutheran Social Services of North Dakota (LSSND), which resettles refugees on behalf of the Department of State and serves as the Department of Homeland Security-designated state refugee coordinator. In the Bismarck area of Burleigh County, LSSND resettles refugees for the United States Conference of Catholic Bishops (USCCB).

In Burleigh County, commissioners weren’t so sure about resettlement, especially after social media posts “tried to fan the flames,” said Shirley Dykshoorn, LSSND vice president of senior and humanitarian services. “Their response was based on fear.”

When 100 people turned up at the commissioner’s meeting to consider refugee resettlement in Burleigh County, it was rescheduled and moved to a middle school auditorium.

The second meeting drew 400 participants. Opponents of resettlement focused on how much refugees cost taxpayers and what kind of impact they had on their communities. “‘They are taking our money. It’s going to cost too much,’ were the things people were saying,” said Beth Walch, a pastor of Lord of Life Lutheran Church in Bismarck.

Dykshoorn shared a number of facts, noting that in 2019, LSSND and communities helped resettle 132 refugees in North Dakota, including about 25 in Burleigh County. The others were resettled in the counties surrounding Fargo and Grand Forks.

Opponents of resettlement focused on how much refugees cost taxpayers and what kind of impact they had on their communities: “They are taking our money. It’s going to cost too much.”

Combating misinformation spread by social media, she confirmed that refugees cover their own housing, car purchases and taxes. She said they are not violent criminals and no data supports the idea that they are more likely to commit crimes or become long-term welfare recipients.

“People at the meeting still claimed that this information was not accurate or honest, and didn’t believe there were no added costs,” Dykshoorn recalled.

Walch and many other ELCA leaders and members showed up in force. People asking commissioners to deny LSSND permission to resettle refugees wore red to the meeting. Ten ELCA pastors, several Benedictine nuns and other leaders from the Bismarck faith community sat together wearing white. Many participate in Bismarck Interfaith, a group of leaders from different traditions, and Bismarck Global Neighbors, which fosters relationships between refugees and the Bismarck community.

Member Kelly Carlson was uncomfortable with the idea that the community could be the first to refuse refugees. “I told them that, as a citizen of Burleigh County, I would be ashamed if we stopped welcoming refugees,” he said. “Lutheran Social Services has been doing this quite a while and there haven’t been any problems.”

Merci Ndaberewe was also there. He spoke on behalf of refugees like his family, resettled by LSSND from the Democratic Republic of the Congo in 2016. “They deserve a chance to come to North Dakota, because we contribute, pay bills and taxes, and don’t break the law,” he told those assembled.

At the end of the four-hour meeting, county commissioners voted 3 to 2 to give their consent to continue resettling refugees in Burleigh County.

After the meeting, Lord of Life invited LSSND staff to an adult forum on the topic of refugee resettlement. This “purple” congregation is made up of liberals, conservatives and “a whole bunch of people in the middle,” Walch said. “We [didn’t] expect people to come to the same conclusions [about resettlement], but we wanted an open dialogue.”

The congregation also drew up a statement committing themselves to welcoming and caring for neighbors, including refugees. “We wanted to have a definitive statement about where we stand and what we are going to be about,” she said.

Lord of Life has resettled refugee families from Ghana, Haiti and Iraq. Member Beth Koch and her husband, volunteers for LSSND, have helped resettle two families from the Democratic Republic of the Congo. One is a young single mother who arrived in Bismarck after losing her father, mother, brother and sister to civil conflict.

“As a citizen of Burleigh County, I would be ashamed if we stopped welcoming refugees.”

“She adopted my husband and me as mama and papa, and we are nana and papa to her 7-year-old son,” Koch said. The two families see each other several times a week, she said, adding, “It’s a very special relationship for us.”

Dykshoorn said, “We continue to have a highly resilient refugee population and very successful resettlement, plus strong staff and welcoming congregations.” Her concern is that in light of the contentious vote, USCCB may choose not to place any cases in Bismarck in the near future.

Faith and Lord of Life members remain committed to standing for welcome. “Our church has been intimately involved in welcoming for 80 years,” said Bull of Faith. “The Bible is not clear on a lot of things, but very clear on welcoming the stranger.”

A glimpse of a new world