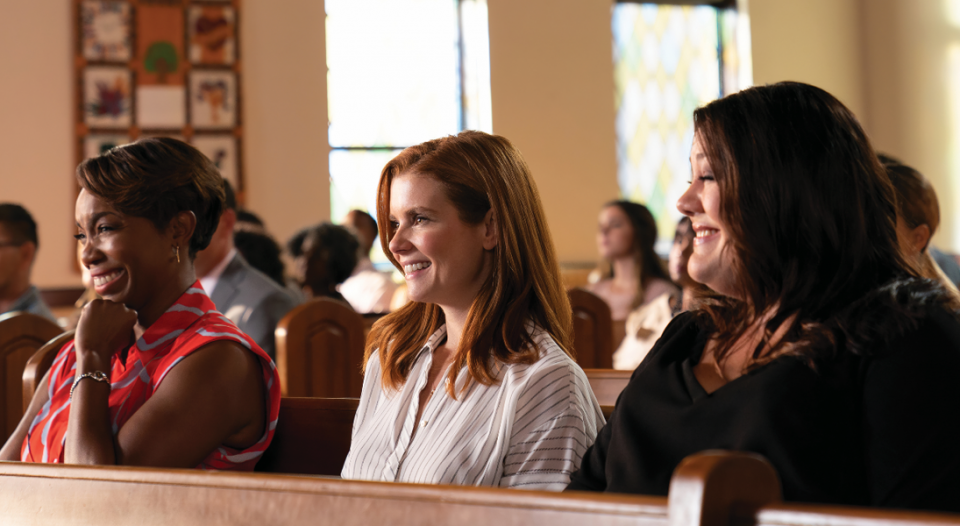 Sheryl Anderson isn’t a religious leader or a missionary, but in less than a year she has built a new ELCA congregation, supplying it with an attentive pastor and room for millions of congregants.

Prince of Peace Lutheran Church doesn’t exist in the physical world, but it’s a second home for the lead characters of Sweet Magnolias, a series that premiered May 19 on Netflix.

Created by Anderson—a member of Mount Olive Lutheran Church, Santa Monica, Calif., and a longtime TV writer—the show is based on a series of novels by Sherryl Woods. It stars several high-profile actresses, including JoAnna Garcia Swisher (Reba, Once Upon a Time).

Sweet Magnolias centers on the lifelong friendship of three women in the fictional town of Serenity, S.C. They support each other through the challenges of their businesses, love lives and child-rearing.

Like the rest of Anderson’s work, this show is on a secular platform. But this time, she was able to include much of what is important to her faith as a Lutheran.

“I’m not trying to speak the Small Catechism, but my worldview is very much shaped by my faith,” she said. “The things that are important to me are grace, redemption and the power of coming together. Those work even if you don’t address them in theological terms. Our ladies do go to church in the series, and they know that they can go to their pastor when they have pressing questions.”

“The things that are important to me are grace, redemption and the power of coming together.”

Although the church in the novel is not Lutheran, Anderson intentionally depicted it as an ELCA congregation in the series, down to displaying the brandmark on the building. She also made the pastor (portrayed by Tracey Bonner) a woman, imbuing the character, June, with the qualities she admires in ELCA pastors.

“I knew what she could offer them in terms of counsel and understanding,” she explained. “These women can go to her at a moment where they can’t even find solace with each other. And she’s able to be with them and be still with them and offer them words of grace and hope that help them get themselves back on the path. She does not dictate. She listens and suggests and guides.”

One character strengthened by her faith is Maddie Townsend, a mother of three with marital problems. Garcia Swisher said the offer for the role came at an ideal time.

“I’ve been so blessed to do so many projects that I feel really passionate about and I’m so proud of, but now I want to tell stories that resonate with me at this moment in my life. I was kind of going to only read for those,” Garcia Swisher said. “And it wasn’t two weeks later that I got the call and they asked me to be a part of the show. I read the scripts and I instantly gravitated to the sense of community, the female friendships, the idea of resilience.”

Garcia Swisher believes the spirituality of the characters rings true, and she thinks viewers of any background will connect with them.

“It really is a special moment where you can have an opportunity to lean into that spiritual side of things and do it in a way that feels super-organic and natural to the setting,” she said. “For these people, church, religion and spirituality, and their belief in their faith are very much a part of who they are at their core. And it’s beautiful.”

“A deep faith in God”

One of Anderson’s supporters is her real-life pastor, Eric Shafer, who called Anderson an active member of Mount Olive and noted that her faith is easy to see in her work. “She wants to show Christianity as loving and accepting of everyone, not hating and rejecting anyone,” he said. “She comes to her television work informed by a deep faith in God and the desire to show the world that regular Christians are people just trying to do good in this world.”

Shafer hopes Netflix will be a powerful platform for spreading a positive message.

“Whenever we can bring religion and faith into the public square—like secular television—we show how our faith informs all of our lives and give a wide witness to the love of God for all people,” he said. “Sheryl’s faithful witness to God’s love through her programs is so very important. Her desire to put an ELCA congregation and pastor into her program is just a wonderful gift and bonus for our church.”

For Anderson, Sweet Magnolias has been one of the best chances for her to merge her life in the church with her work.

“I’m getting a little teary,” she said, describing it. “It is a gift to be able to do what I love best, what I feel I was gifted to do, and to have the opportunity to have these remarkable characters portrayed by amazing actresses who have all been on their own faith journey. It’s a blessing. I’m thankful for every day. It’s my script, but it’s [God’s] design.”

What Tidying Up can teach us about grace

A focus on what matters most, part one